Sometimes researching land ownership through centuries old land grants can reveal some interesting information, as historians have discovered over the years. Pouring over old state land office documents can tell the story of tract acquisitions through a variety of means, whether land grants, squatting or outright purchases.
In 1977, the Northlake-Mandeville Rotary Club heard a talk by a geography instructor from UNO that gave a glimpse into the world of land ownership research. Here's an article from the March 7, 1977, issue of the St. Tammany News Banner detailing that presentation.
Florida Parish Land History Explored by Rotarians

Carolyn French, Instructor in geography at the University of New Orleans, addressed the Northlake-Mandeville Rotary Club at its recent meeting at Covington Country Club.

Ms. French told the Rotarians that she is currently researching the acquisition of land in the Florida parishes by government grants. She has been compiling material from old maps, survey reports, and other documents found at the State land office in Baton Rouge.

"These old maps, survey reports and documents don't supplant, but rather supplement more traditional sources," says Ms. French, "though often, our ideas of a bygone era have been given to us by the records and journals of the more prosperous, literate persons of that era.

"But the little known records at the State Land Office serve as the voice of the uneducated small landholders, even the squatters  of the late 18th and early 19th century. The mark on our landscape left by these common people is both far reaching and too little studied, yet, these are the people from whom most of us are descended."

Ms. French showed the Rotarians a slide presentation in which she demonstrated how she analyzed data from more than 2000 land grants from 50 townships in the Florida parishes. From these maps, Mrs. French is able to locate many now forgotten farm homes, rural hospitals, ferries, mills, graveyards, relic roads, Indiana mounds, and villages, and squatters fields, many of which have returned to forest. 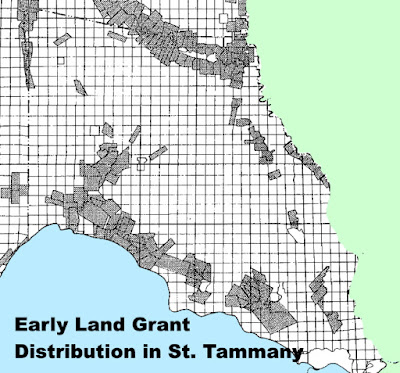 "No doubt," said Ms. French, "some of these farm homes are still standing, although the present owners may not be aware of the structure's age and history - and, when located and studied, they could provide insights into the folk culture of less prosperous settlers.

"If located, by use of these old maps, surviving structures may be of interest to anthropologists, historians, ecologists and planners who are interested in studying and preserving remnants of our past "

Mrs. French is attempting to analyze 2,000 of the 6,000 original land grants in the Florida parishes.  To do this, she is using a computer program to correlate the many variables related to each grant - the type of grant (for example, whether it was a royal grant, be it from the king of France, or the king of Spain, or an American grant from the U. S. Government), the date the grant was settled, its proximity to a waterway or a road, the presence of fields, and the location of old buildings, roads, ferries and bridges.

Ms. French said that the computer is correlating more than 40 variables for each of the 2000 grants.

Her studies of these land grants has reached only a portion of St. Tammany Parish at the present time, and Ms. French said she was familiar with those grants in the Slidell area owned by Francis Cousins, Joseph Laurent and John Guzman.

Ms. French, a native of Crowville, La., attended Northeast Louisiana University at Monroe, where she obtained an undergraduate and a graduate degree in history and has taught at L.S.U.In Baton Rouge where she began working on her PhD in geography. 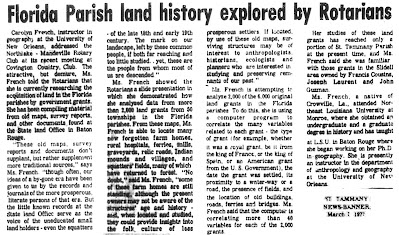 In 1978, Ms. French wrote her LSU Thesis on "Cadastral Patterns in Louisiana: a Colonial Legacy." It contained a considerable amount of information on early land grants in the Florida Parishes. To read the entire historical dissertation, CLICK HERE to view a PDF file.
Here's another article about the work and research that was done by Carolyn French. This one was published in the Times Picayune on November 28, 1976. Click on the images to make them larger. 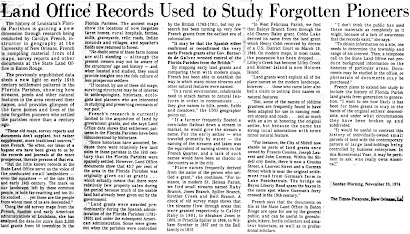 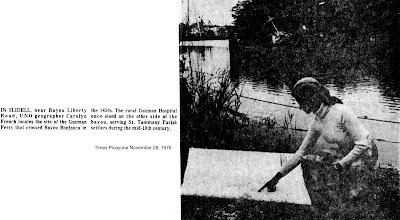