Over the years, it has been the subject of many an artistic photograph, painting, and even postcards. Bridal photography has used it as a background. Motorists along U.S. 190 in Covington marvel at its roadside mystery every day.

It is the 100-year-old pine knot sanctuary-haven that sits just off the highway on the old Warner home property in west Covington. The shed, about 16 feet by 16 feet, features walls of intertwined heart pine knots, a tin roof, and a dirt floor, with gates leading out of the front and back. It is surrounded by vegetation, at times obscured from view, and backed by beautiful trees. 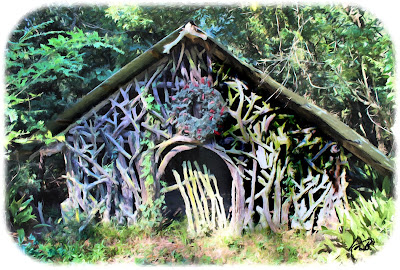 Click on the images to make them larger
According to Warner family members, the shed was made with fat pine knots from the Mackie Pine Products company sometime in the early 1920's. Richard Warner explained that it was a walk in gate and was used by his dad's wife to raise ferns.

"This was back when 21st Avenue was a dirt road and a lot of people walked where they were going," said Richard Warner on Facebook. "It used to have a wood shingle roof, but it finally rotted away and was replaced with tin." 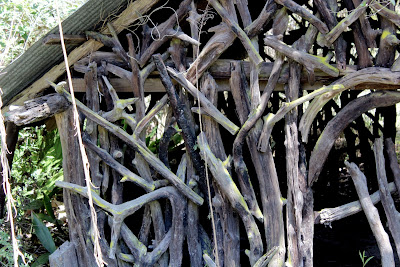 Over the years people passing by have speculated why it was built, and there were a lot of false rumors regarding its original purpose, Warner noted.

Many older Covington residents today have it indelibly etched in their memories because of their daily trips as students on their way to Covington High past the structure.

Richard Warner went on to say that his father, J.H. Warner, Sr., used to say he graduated from the school of hard knocks. He learned bookkeeping/accounting while he was a representative of the American Paint Works and met Harry Mackie in the early 1900's during which time they became friends.

"Mr. Mackie was a chemist and had a small plant in Mississippi but decided to move it to our area early in the 1900's because of all the longleaf pine stumpage in the area," Richard explained. "My father bought some stock in the new Mackie Pine Products and was elected Secretary/Treasurer by the board of directors of the corporation. J. Harry Warner, Jr.(Harry), who was my half brother, worked in the plant and became plant superintendent."

When the plant burned in 1945, Mr. Mackie decided to retire and Harry, Jr. bought him out and the plant was rebuilt and renamed Delta Pine Products. "My father continued on as Secretary/Treasurer of the company until his death at the age of 89 years and 10 months of age in 1958," Richard went on to say.

When the company found it hard to acquire enough stumps to process, it was decided to scrap the plant. Buddy Perreand was with Southern Scrap joined with Harry, and it became P&W Industries which, according to its webpage, was established in 1967.

Anne Sarphie of Re/Max Alliance real estate even has a description of it on her business webpage. "The Knot House: A well-known landmark in Covington is called "The Knot House" or "The Twig House". It is located on private property, but it sits so close to the road that you see it as you drive by. Built nearly 100 years ago... it has withstood many hurricanes, high winds and falling tree limbs. It is constructed from the heart pine knots, the hardest and heartiest part of the pine tree. It makes me smile every time I pass it." 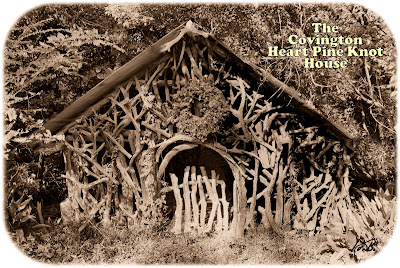 Artists and photographers have found it enchanting, especially when the sun and shadows are just right. Being made of knots of heart pine, it's a unique bit of Covington's timber and pine oil history and has a special place in many people's hearts.

Click on the images below for a larger sized version of the picture. 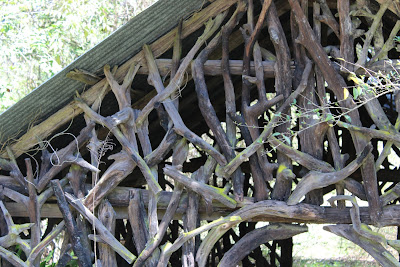 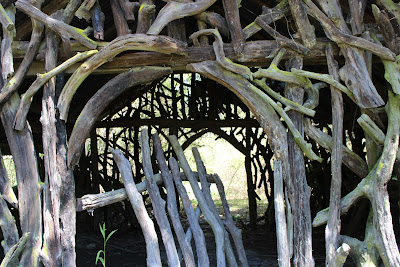 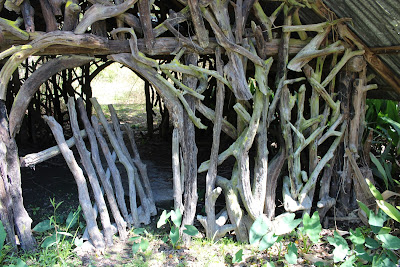 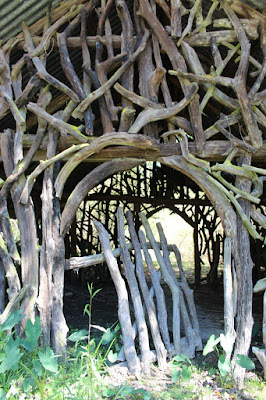 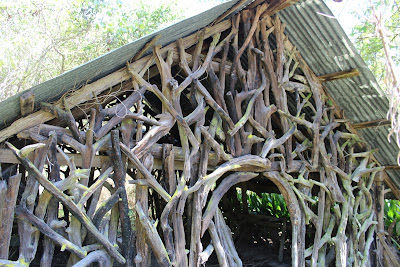 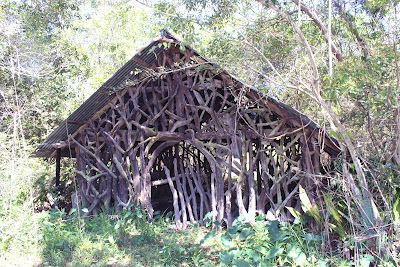 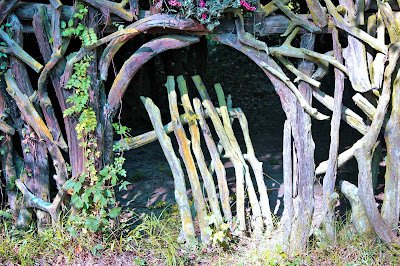 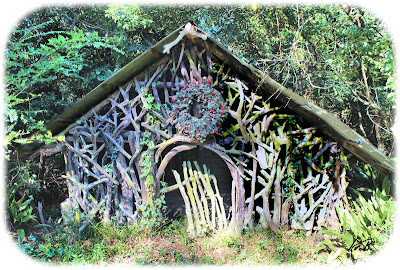 Roadside refuge of twisted pines
A sheet tin roof and mass of vines
A crooked gate that welcomes all,
A hundred years and still stands tall

The Warner family pine knot shed
Warms your soul and clears your head
The wonder of it, the joy it brings
The mystery of which it sings

Nature's knots, cast aside
Brought together to close abide
Woven, stacked and tucked and bound
Makes a place where beauty's found

Behind the pine knot house was the Warner family property. Here are some pictures of the classic family home as found on a real estate website when it was for sale a few years ago. 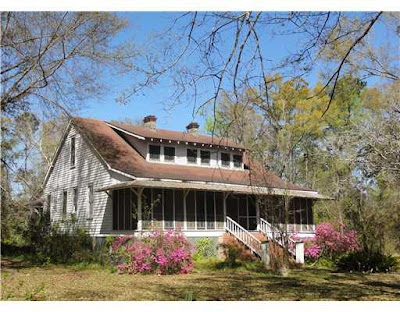 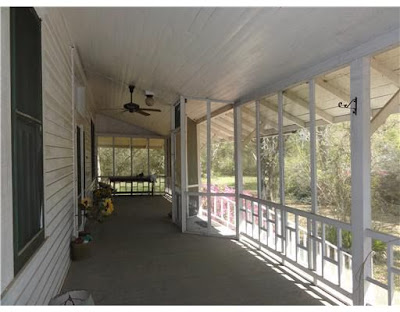 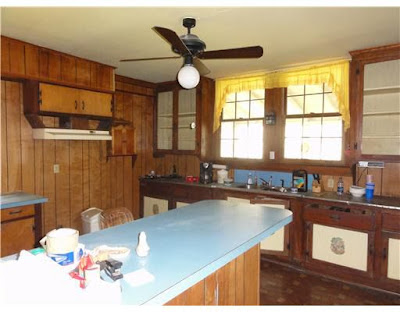 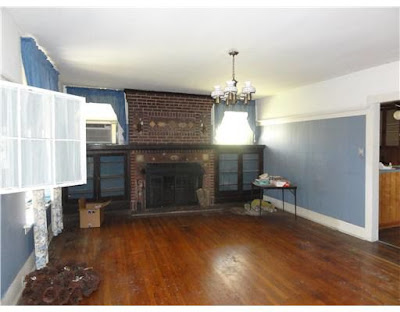 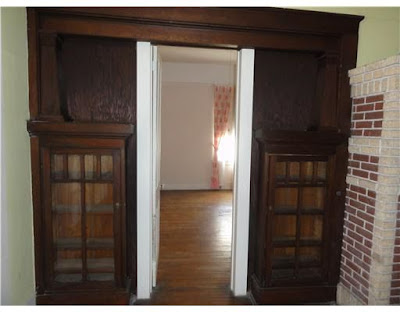 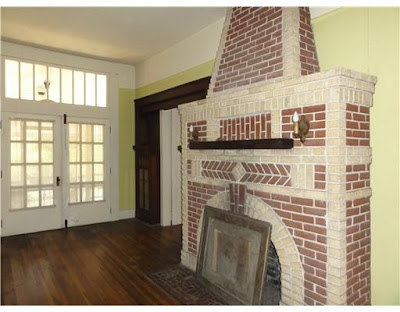 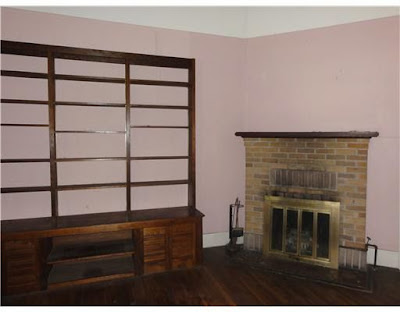 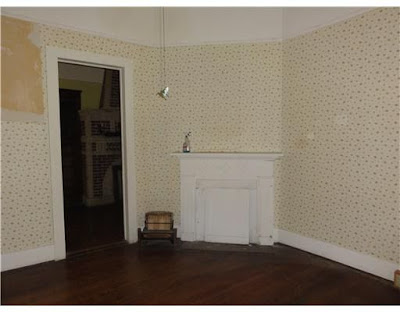 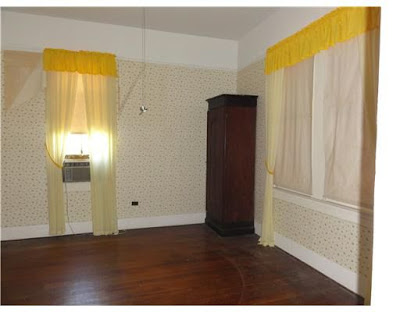 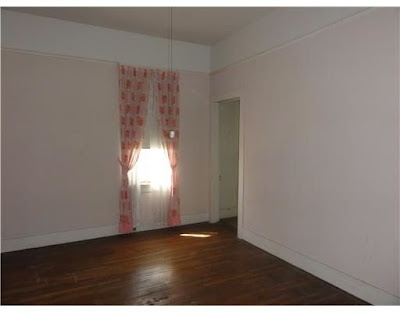 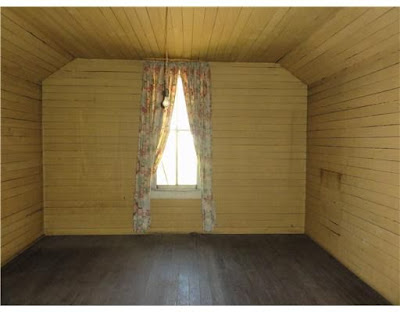 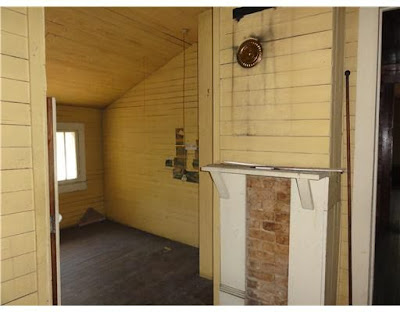 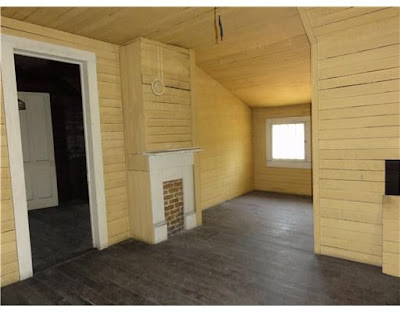 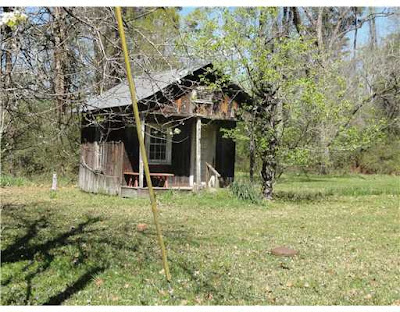 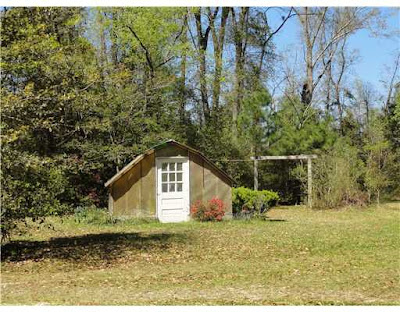