Here are a couple of posters from the 1930's advertising Waldheim Gardens, the Jahncke family property south of Covington. 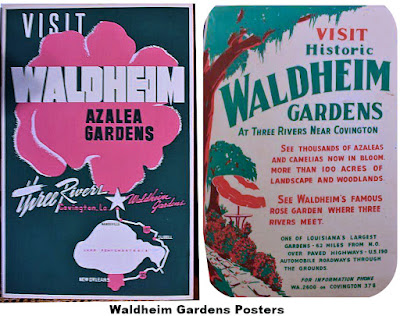 The poster on the left tells us the Causeway wasn't built yet, and the poster on the right says that the phone number for the Gardens was "378" so these were printed a long time ago.

Here are some photos from the gardens in their heyday. 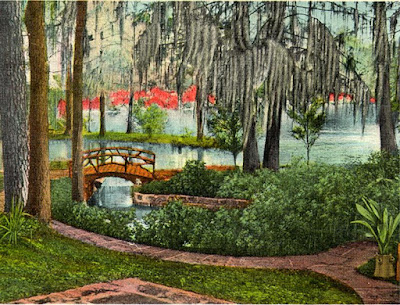 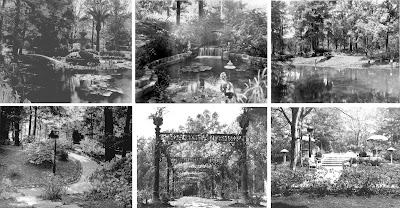 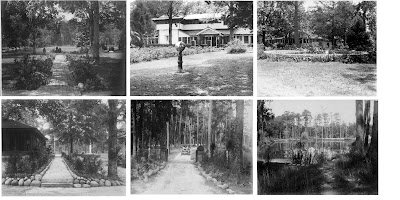 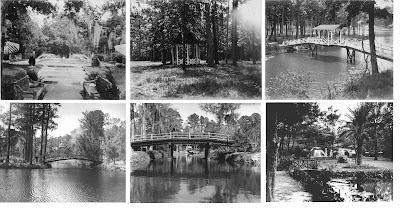 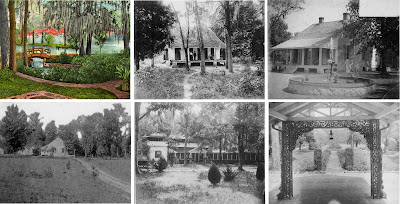 The Waldheim Gardens setting was also depicted in a series of paintings by one of the Jahncke family artists. 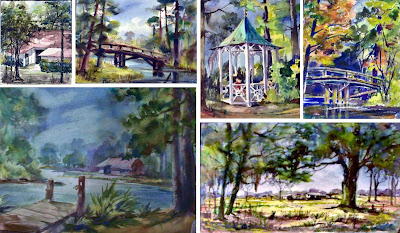 The rail line felt that continuing the track through Folsom to Franklinton seemed to be an idea whose time had come.

"The extension of the East Louisiana to some interior point, either to Franklinton or further, would result in much benefit to Covington, a fact that business people of that town doubtless appreciate. It is stated that when the town is asked what it will do, prompt action will be taken," the article stated.

In other words, the railroad expected Covington to help foot the bill through increased usage. "The East Louisiana people have plenty of money for developing their extension plans, provided they see increased business involved in them," the article went on to say.

According to the news item, the Slidell to Covington railroad had become an "important road" recently to the "health-giving" section it ran to, and thousands of New Orleans people were spending the summer there, building new homes.

"The plans the company have for extension will doubtless take shape during the next few months," the article ended.

If the railroad was trying to take credit for opening up the area to "thousands" of visitors and summer residents, then it was a little late for that. New Orleans people had been arriving by boatloads to Mandeville and Covington for decades already.

In 1902 the Greenlaw Lumber Company built a logging line northward out of Covington to Ramsay, and shortly thereafter the New Orleans Great Northern Railroad extended that railroad track to Folsom. 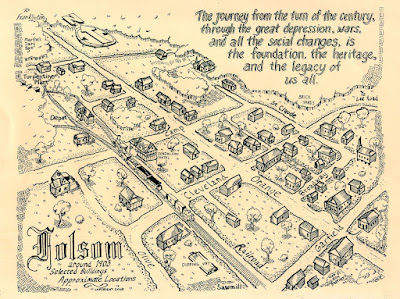 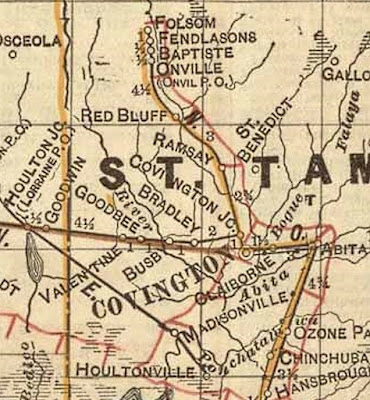 In Folsom a large turnaround track enabled passenger and freight trains to reverse direction. It also enabled Folsom to become established as a trade center for lumber and other products needed by a growing New Orleans market. Unfortunately, the track was never extended to Franklinton. 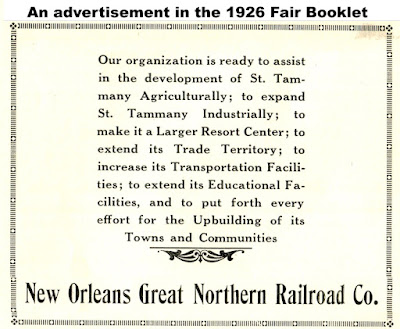 An advertisement in the 1926 St. Tammany Fair Association Booklet

Folsom Train Depot
Posted by Ron Barthet at 9:04 AM

In 1952 Doubleday published a book by Covington resident Mary Frances Morgan. Its name was "Teacher Lady," and it turned out to be quite a success. 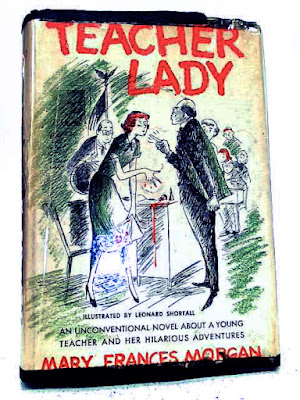 The book was widely reviewed in print. Click on the images to make them larger. 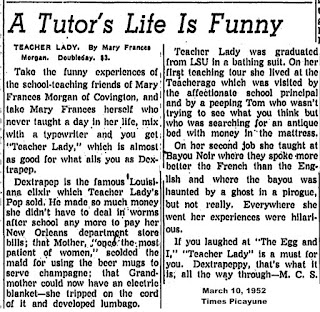 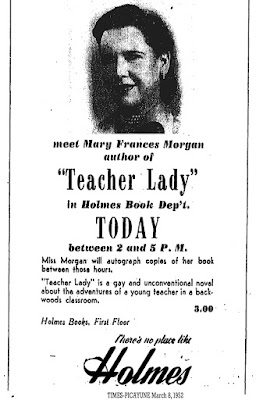 D.H. Holmes Department Store in New Orleans brought her in for a special book signing event.
She was a prolific writer for area newspapers and magazines.

Her article about Dr. Paine in Mandeville

Her article about Mathilde Johnson, Lacombe Choctaw
She was born in Atlanta, GA, on September 24, 1910, and lived in New Orleans until her marriage to Lewis Lovering Morgan Jr. at which time she moved to Covington. She moved to Shreveport in 1992 and died at the age of 90 years on Friday, February 2, 2001, after a lengthy illness. According to her obituary in the Shreveport Times, she was a noted professional writer and artist during her varied careers.
She served as president of the Covington Business and Professional Women's Club from 1949-1950, and she wrote an account of her father-in-law, the late Lewis Morgan, in the third edition of the St. Tammany Historical Society Gazette in 1978.
Her obituary noted that she was a former television talk show host and writer, having produced a number of short stories for Collier's and Liberty magazines, Detective Stories, Photoplay and True Story. Among those she interviewed during her journalism career were Eleanor Roosevelt and Amy Vanderbilt, her obituary said.
In 1951 she went to work for WDSU-TV in New Orleans as women's editor. She was also hostess and editor of WDSU's first live talk show. She later worked as a technical writer for the Department of Agriculture and the Selective Service.
In 1977 she was honored by the St. Tammany Parish Library along with other area authors. 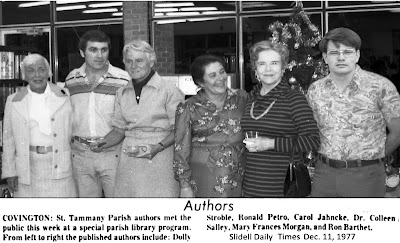 Authors Recognized
COVINGTON- St. Tammany Parish Authors met the public this week at a special library program. From left to right the published authors include Dolly Stroble, Ronald Pedro, Carol Jahncke, Dr. Colleen Salley, Mary Frances Morgan and Ron Barthet. Slidell Daily Times, Dec. 11, 1977
On Arbor Day in 2003 the Covington Garden Club dedicated two dogwood and two redbud trees in memory of recently deceased members. They included Mary Frances Morgan who had been president of the club in 1955-56. Mary Frances was also the club artist who did the cover for the annual booklet of the garden club. She was a member of many civic organizations.
Links to other articles written by Mary Frances Morgan

Elizabeth Jones "The Doctor of Madisonville" 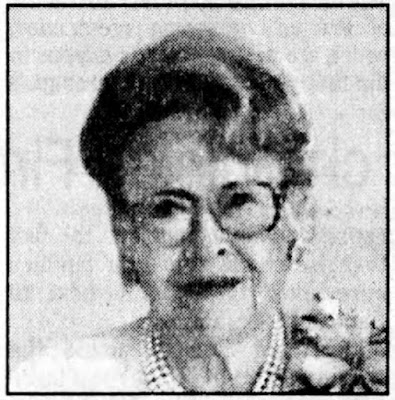