In 1977 a group of horse enthusiasts from Germany took a tour of St. Tammany horse farms. The day-long event was arranged by Ted Talley of Talley's Feed & Seed in Covington. The tour took place in March of 1977, hosting more than 40 German horse professionals and breeders. The event was part of an agricultural exchange program coordinated by the Ralston Purina Co. and Talley's Feed & Seed.

Included on the tour were thoroughbred farms, an Arabian farm and an American Quarter Horse breeding farm, according to Ted Talley, who put it all together. The well known Clear Creek Stud Farm and Dorignac Farms were highlights on the tour.

At the end of the tour, the group stopped by Talley's Feed & Seed in Covington for "a look at an all-around American feed and farm supply store."

The tour group was made up of German stable owners, veterinarians, riding club owners and feed salesmen. 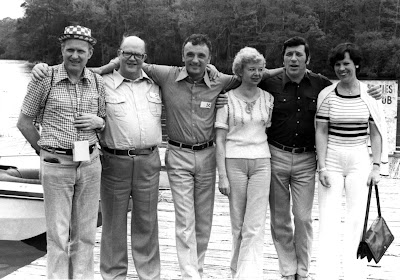 Some of the visitors on the tour
"The fact that Purina headquarters tapped us for a stopover is, in my opinion, indicative of the increasing national prominence St. Tammany plays in the horse industry," Talley said.

Here is a press release sent out prior to the event, inviting area press to take part in the tour.

Click on the image to make it larger.
A few months after the tour of area horse farms, Talley shared his experience in an article for "Tac N Togs Merchandising" Magazine, telling of the opportunities afforded local feed store owners in setting up tours for a variety of groups, from local clubs to international industry representatives.

In the article Talley pointed out that he made sure that the German visitors enjoyed themselves during the tour, allowing time for them to ask questions and learn the key points of horse farm operations in St. Tammany. Since Talley's Feed & Seed had a lead role in organizing the whole thing, the last stop of the tour was a visit to the Talley retail store in Covington. 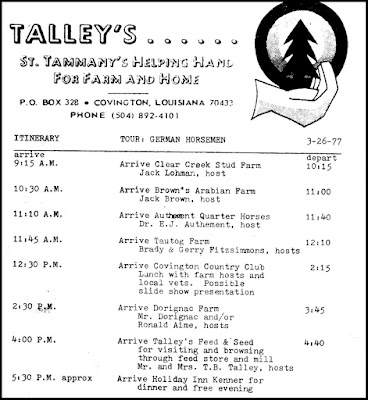 The schedule of sights along the tour
In his description of the event, Talley said,"There is no better place to end a tour than at your retail store where visitors can see first hand the role you play in the local horse and agricultural industry."
Belt Buckles & Blue Jeans

"Because of their busy schedule while in the U.S., the German horsemen we hosted in Louisiana had never been offered the chance to shop at an American Western wear shop until we ended their tour with a stop at our business place. In spite of communication problems and the differences between American and European apparel sizing, the enthusiastic Germans purchased several hundred dollars worth of jeans, shirts and tack in less than an hour. The sales experience with the West Germans proved that horse breeders and stable owners are alike worldwide."
The German tour of horse farms even garnered quite a bit of attention statewide, as this letter from Lieutenant Governor Jimmy Fitzmorris Jr. shows. He was also the chairman of the Louisiana Board of Commerce and Industry at the time. 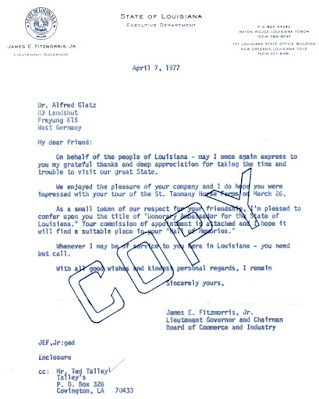 In fact, Lt. Gov. Fitzmorris agreed to join the tour group for lunch. Speaking to them through an interpreter, he made them honorary Louisiana ambassadors to West Germany. "The Germans appreciated this gesture of international friendship," Talley said.
Besides Covington, other stops in the United States for the German tour group included Lexington, KY, and Houston, TX. 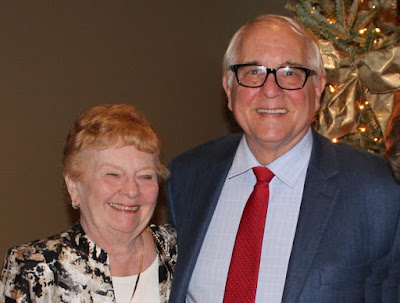 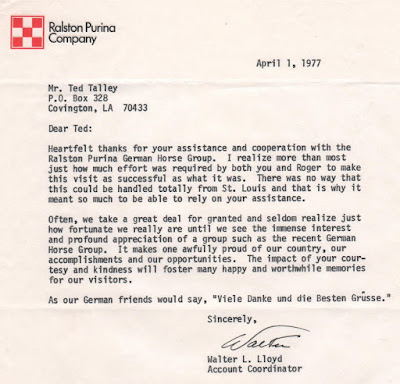 A letter from Purina thanking Talley for his efforts 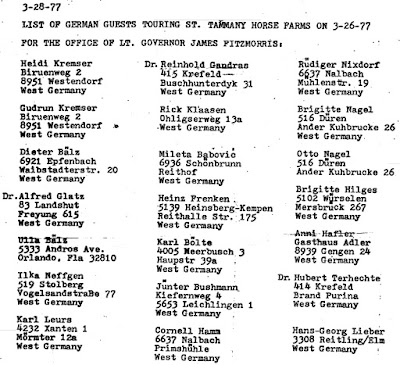 A list of some of the people taking the tour
Ted Talley received a B. A. degree in 1972 from Baylor University majoring in radio, TV, and journalism. His career has included free-lance writing and serving as a public relations consultant. Beginning at five years of age, he was involved in his family-owned feed and seed retail establishment. "My mother kept a box of toys for me at the feed store office," he explained. "I was raised at the store."

Horse Farm Maps From Years Ago

Horses Are An Important Part of St. Tammany Activities