Louisiana Avenue All Over The Place

Prior to 1917, one of Covington's busiest streets was Louisiana Avenue, a broad dirt road lined with beautiful oaks. It led from the downtown area southward towards St. Paul's and turned westward to connect up with the bridge over the Tchefuncte River that led down to Madisonville. Here's a postcard showing the thoroughfare. 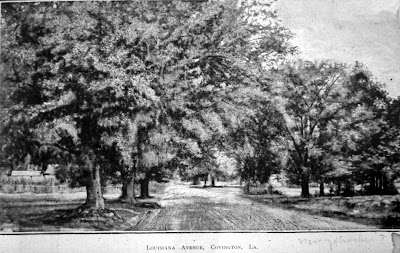 Louisiana Avenue Postcard
As the road to Madisonville got more and more traffic, due primarily to the expanding shipyard business on the Tchefuncte River there, complaints mounted that the dirt road should be improved, with a layer of shells if possible. The man to make this possible, Walter Jahncke, lived on Louisiana Avenue in Covington, and, with an interest in keeping travel between Covington and Madisonville as smooth as possible, he called upon his shell dredging company to make the city of Covington and St. Tammany Parish an offer that they were glad to accept: for every load of shells they purchased to put on the Madisonville Road, he would donate another load of shells for the project. 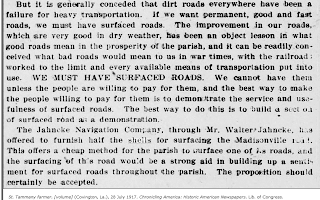 Click on the image to make it larger and more readable.
Several newspaper editorials lamented the need for improving the dirt roads and saw shelling a viable alternative, especially as more and more workers at Madisonville shipyards were looking for housing in the Covington area. 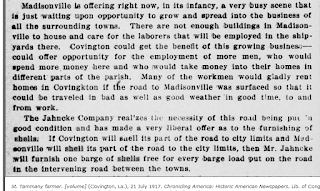 Improvements to the Madisonville Road became a priority once shipbuilding began ramping up for World War I demands. 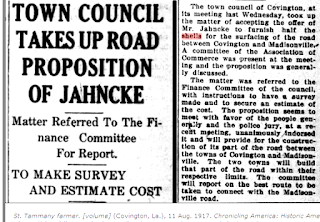 The Covington Town Council appreciated the offer of shells

Within a year, the Madisonville Road and Louisiana Avenue were greatly improved. The city of Covington , in order to show its gratitude, renamed Louisiana Avenue "Jahncke Avenue" in honor of Walter Jahncke's family who operated the shipyard and the associated navigation company that did the shell dredging. 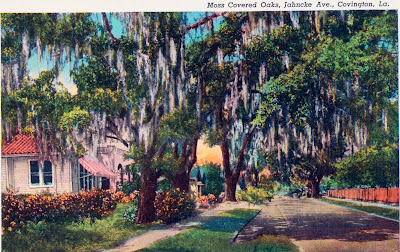 Another postcard, this one in color and spotlighting Jahncke Avenue
Not all of Louisiana Avenue was changed to Jahncke, however, because the route to Madisonville veered westward at around 14th Avenue, leaving the path followed by Louisiana Avenue and making a sharp turn shortly after that to head west to Filmore Street, where it turned southward to cross the wooden bridge over the Tchefuncte River that was at that location. 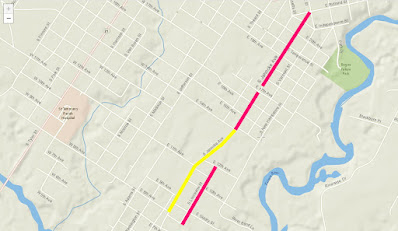 Click on the images to make them larger
Interestingly, a four block segment of Louisiana Avenue remains today, along the same alignment as most of Jahncke Avenue, but south of where Jahncke veers to the west and moves a block over. The current day Louisiana Avenue runs between 12th Avenue and 8th Avenue.
Here's the section of the 1935 map that shows the Bogue Falaya River and the streets from downtown (at right) down to St. Paul's Campus (at upper left). 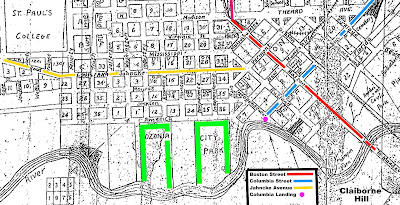 At the end of New Hampshire Street is "City Park," now known as Bogue Falaya Park, and just downriver from there was Ozonia, a rest home retreat on South America Street. At this point in time, Jahncke Avenue passed by St. Paul's College, although early on it was known as Louisiana Street and sometimes "Old Landing Road" since it went on down to the Old Landing.
To further confuse the matter, a 1927 Sanborn Map shows that four block section of Louisiana Avenue as Yates Street.
Complications Arise
The matter was complicated further, about twenty years later, when the Covington City Council re-named some streets to accommodate a new post office address system. As per information from Jack Terry:
"Louisiana is a complicated street. Around 1917 it was changed to Jahncke Avenue, then in 1936 Jackson St in the Division of Spring area was changed to Louisiana.  Jackson street was changed to South New Hampshire some time later.  It tends to be very confusing for anyone looking for relatives in Covington, since many of the old addresses have been changed over the years and there is very little documentation."

Excerpts from the January, 1937, minutes book, City Council of Covington
At the January, 1937, city council meeting a resolution was offered to change the names of certain streets in the city where duplications had occurred. This needed to be done "in order to avoid confusion and hasten the delivery of mail to our city by postal carriers." The resolution said the following:

Jefferson Street, in Old Covington, which at that time ran from America Street to Jefferson Avenue, was to be changed to Jefferson Davis Street.

Madison Street, which at that time was a continuation of Theard Avenue, was to be changed to Theard Avenue from its intersection with Columbia Street all the way to Hancock Street. (19th Avenue?)

Monroe Street and its continuation known as Independence Street in the Division of St. John, stretching from the Bogue Falaya River at the foot of Columbia Street, to Seventh Avenue beyond River Glen park, was to be changed to Wharton Street, in honor of the founder of Covington.

Washington Street, in Old Covington, which at that time ran from the Bogue Falaya River to Jefferson Avenue, was changed to Lafayette Street.

And Jackson Street, in the Division of Spring, which at that time ran from New Hampshire to River Glen Park, was changed to Louisiana Street.

That's not all of the story, however. To further complicate the matter, there's another Louisiana Avenue just west of Covington, located between Pruden Road and the Tchefuncte River, that starts at U.S. 190 and heads north.
So if someone tells you their family lived on Louisiana Avenue in Covington, you may have to ask them which one when.