In the early days of Covington, before the roads were in good shape and before the train tracks were built, river traffic on the Bogue Falaya River was paramount. Boats coming up the Tchefuncte River from Madisonville needed a dock to discharge passengers from New Orleans and take on cargo from areas north of Covington (to bring back to New Orleans). So a major landing was developed on the point of land south of Covington at the confluence of the Bogue Falaya and Tchefuncte Rivers. 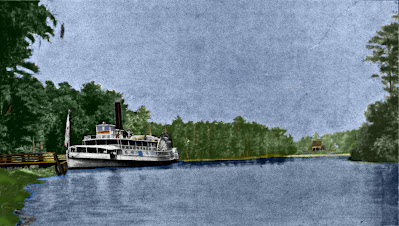 This was the landing where your grandparents and great grandparents would disembark from the lake schooners and steamboats, hop aboard a horse and buggy and head up Old Landing Road (Jahncke Avenue) two and a half miles to downtown Covington.

Land records show that Old Landing was owned by the Badon Family based on an early settlement land grant to Henry Badon. It was this landing that played a pivotal role in the development of early Covington, and it was quite popular, especially since it was also a ferry crossing, according to one time parish archivist, the late Bertha Neff. This was in the early to mid 1800’s.

Text from the above notes:

Henry Badon in 1806 acquired the land opposite his mother's estate between the Tchefuncte and Bogue Falaya Rivers, and here was located one of the first ferries, long referred to as "Old Landing," Jahncke Avenue, which brought the east and west banks of these two rivers together. 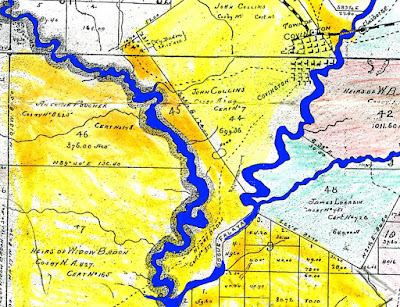 The dotted line seen at the middle bottom may have indicated a horse trail or footpath, and where the dotted line crossed the Tchefuncte River would have been a good place for a ferry. On an adjacent map, the dotted line continues southward, crossing the Charles Parent land grant, and goes down to Madisonville. 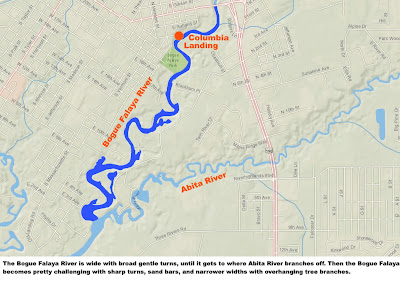 Once the Bogue Falaya River passed the Abita River, it gets  narrower and with sharp turns and sandbars

Old Landing was three miles from the center of Covington, so there were taxi (hack) services that provided transfer of passengers and cargo up Old Landing Road all  the way up to Covington and points beyond. 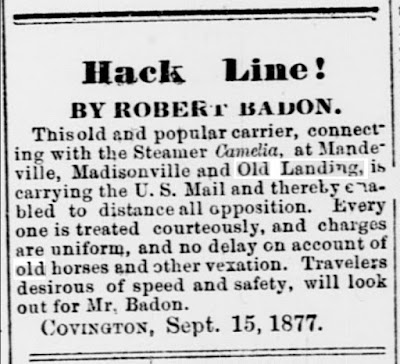 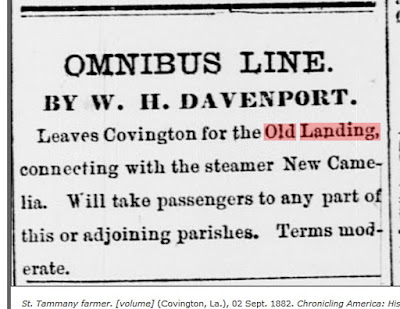 According to Collins family historian Thomas Wharton Collens, who gave a speech to the St. Tammany Historical Society in 1988,  the first of the Collins family to come to Louisiana was William Wharton Collins, who was an experienced sea captain. Jack Terry, who helped research this article, said, “Badon Landing may have been where William Collins docked when he delivered mail to North Shore.”  William Collins had a post office contract to bring mail back and forth across Lake Pontchartrain to New Orleans, stopping at Madisonville and probably further upriver at Old Landing.

Thomas Wharton Collens also told the historical society that William's brother John Wharton Collins came to New Orleans in 1800 at the age of 18, and in 1811, John Wharton Collins was working as a grocer on Levee Street in New Orleans. Two years later he purchased the Jacques Drieux property and this is what became what we now know as Covington, according to the 1988 speech by his great great grandson.

As Covington grew in size and commercial activity, the landing became more important. Covington developed as the southern end of major trade routes from Columbia and Holmesville, Mississippi, and when river dredging became available, the channel all the way up to Covington was deepened so that more boats could make it up to Columbia Landing. This was preferred since it was only a block from downtown Covington where all the major hotels, boarding houses and restaurants were located. 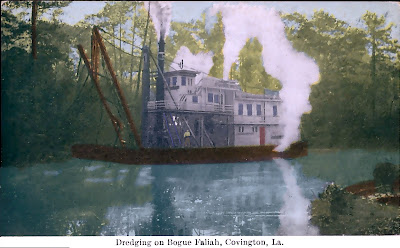 A dredge boat working on the Bogue Falaya

At some point Badon Landing became the Old Landing, and is referred to as such over the years. Several other river landings were along the river, with Columbia Landing being the northernmost.

In this 1939 USGS topographical map, the "head of navigation" on the Bogue Falaya River was shown at approximately where the Chimes Restaurant is today. That was with regular dredging, however. As the dredging came to a stop, the river silted up and getting deep draft vessels to Columbia Landing became next to impossible. 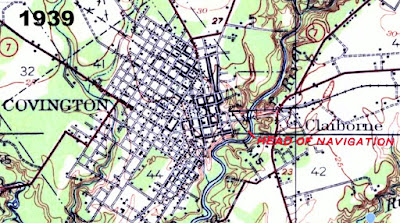 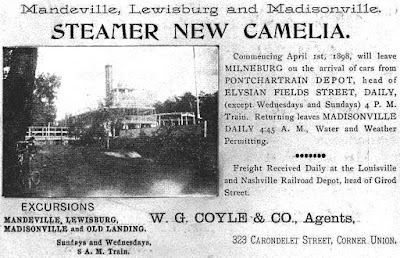 A picture of the New Camelia at Old Landing
Click on the image to make it larger.

The New Camelia was one of the boats that was too large to make it all the way upriver to Columbia Landing, so it had to use Old Landing.

According to Jack Terry, “From 1878 through about 1906 it appears that the New Camelia was docking  at Old Landing.  But after that it appears to be docking at Madisonville and Mandeville, and people used the train to get from Covington to Mandeville to connect to the New Camelia.” In 1909 and afterwards Covington folks could have easily hopped on the motor car trolley and rode down to Mandeville lakefront to board any one of several New Orleans bound steamboats. 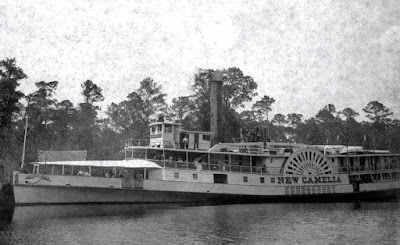 Another picture of the New Camelia at Old Landing
Some interesting newspaper clippings: 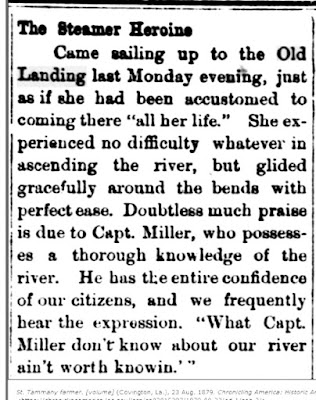 1879
Text from the above newspaper item:

The Steamer Heroine came sailing up to the Old Landing last Monday evening, just as if she had been accustomed to coming there "all her life." She experienced no difficulty whatever in ascending the river, but glided gracefully around the bends with perfect ease. Doubtless much praise is due to Capt. Miller, who possesses a thorough knowledge of the river. He has the entire confidence of our citizens, and we frequently hear the expression: "what Capt. Miller don't know about our river ain't worth knowin'." 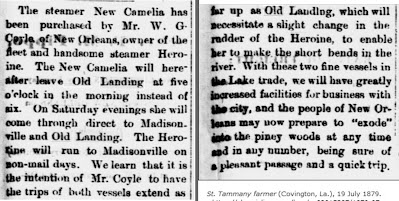 Text from the above newspaper item:
The steamer New Camelia has been purchased by Mr. W. G. Coyle of New Orleans, owner of the fleet and handsome steamer Heroine. The New Camelia will hereafter leave Old Landing at five o'clock in the morning instead of six.

On Saturday evenings she will come through direct to Madisonville and Old Landing.

The Heroine will run to Madisonville on non-mail days. We learn that it is the intention of Mr. Coyle to have the trips of both vessels extend as far up as Old Landing, which will necessitate a slight change in the rudder of the Heroine, to enable her to make the short bends in the river.

With these two fine vessels in the Lake trade, we will have greatly increased facilities for business with the city, and the people of New Orleans may now prepare to "exode" into the piney woods at any time and in any number, being sure of a pleasant passage and a quick trip.
(Note: the word "exode" means to make an exodus out of one place into another place) 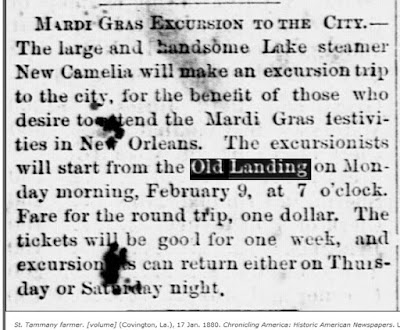 1880
Text from the above newspaper item:

Mardi Gras Excursion To The City - The large and handsome Lake Steamer New Camelia will make an excursion trip to the city, for the benefit of those who desire to attend Mardi Gras festivities in New Orleans. The excursionists will start from the Old Landing on Monday morning, February 9, at 7 o'clock. Fare for the round trip, one dollar. The tickets will be good for one week, and excursionists can return either on Thursday or Saturday night. 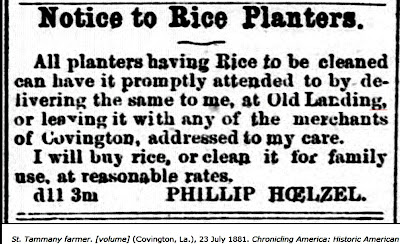 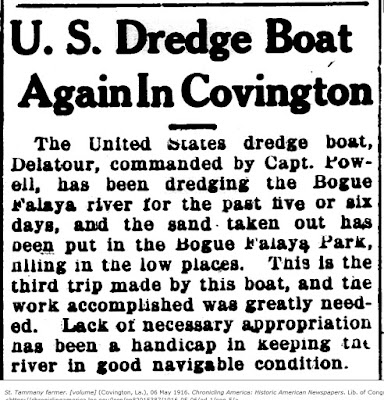 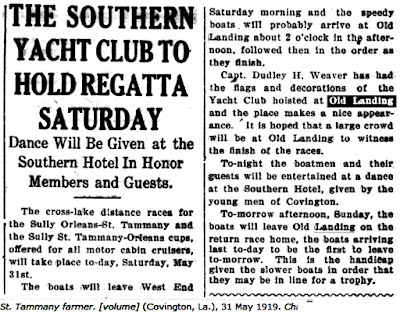 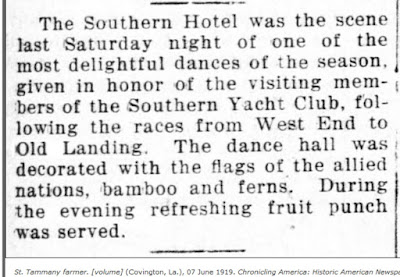 The dredging of the Bogue Falaya River up to Columbia Landing became more and more of a challenge, as silting of the river bottom caused more boats to run aground over the years. When the trains came, the shipping of cargo from Covington to New Orleans starting using the railroad more, and Columbia Landing lost some of its business. 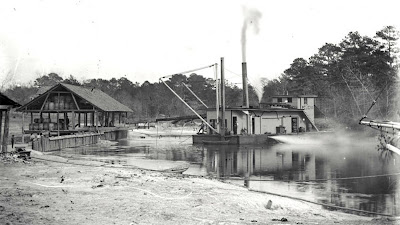 The periodic dredging of the Bogue Falaya River from Columbia Landing (shown above) down the river to the Tchefuncte River became more costly and less justifiable.
Over the years, the name "Old Landing" began to refer to the residential community in the area between the two rivers, served by Old Landing Road. 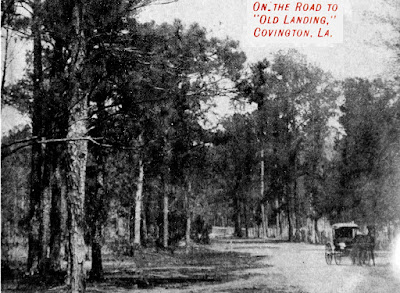 The map below points out a river bend location that would match up with previous photographs of "Old Landing," and that point is where relatively high ground starts right next to the river. It would have been a good spot for a dock, a wharf, and a road going up to Covington. 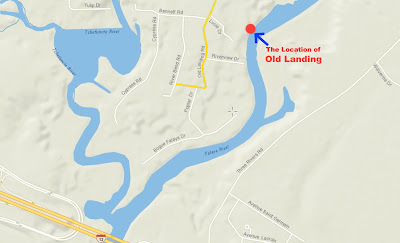 Thanks goes to Pat Clanton, Jack Terry, Mark Johnson and Dorothy Frederick for their information regarding the location of Old Landing.

The Life and Death of the New Camelia Lake Steamer