For more than 40 years historian Donald J. Sharp has been pulling together information about the Tchefuncte River, St. Tammany and Livingston Parishes, and southeast Louisiana. His work includes gathering facts about inventor James Rumsey who was active here during the time just prior to the American Revolution. It was Rumsey who kept "The Secret of Pearl River Island." 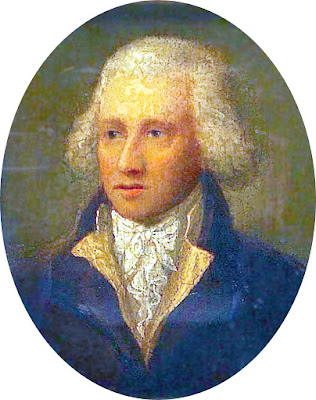 A mechanical engineer, Rumsey was working on several things, but the most interesting were his efforts to propel a watercraft upriver, against the current, using steam engine power. According to Sharp, Rumsey was born in England, came to America, helped set up fur trading posts with the Native Americans in Illinois, then came to Natchez, New Orleans and eventually Bayou Lacombe.

He secretly worked on his steamboat design while living on Bayou Rouville, off of Bayou Lacombe at first, and then on Pearl River Island near the Rigolets. He moved to Baltimore, Maryland, to finish his work on the steamboat, and demonstrated it in 1787 in the Potomac River at Shepherdstown, West Virginia.

Click here for a link to a brief overview of Donald Sharp's research into the legendary James Rumsey.

Rumsey worked hard at keeping his invention a secret, as was the usual practice among inventors, given that ideas were often stolen in the days before the patent office. When his Lacombe location became too exposed to locals and passersby, he moved the operation to the isolated Pearl River Island location. While there he helped a well-known naturalist recover from illness acquired while he was traveling along the Gulf Coast. According to Sharp, that naturalist was William Bartram, and he mentioned in his journals his time spent recuperating in the Pearl River swamp and the Englishman who was working on something secret there.

Did Rumsey's invention ever get finished? Well, yes, and many historians report that he succeeded in inventing the first steamboat, a watercraft propelled by steam engine. Credit is usually given to Robert Fulton, however, who in 1807 developed the first commercial steamboat.

Several people were working on coming up with a viable steamboat design at around the same time, so the race was on to build a working prototype and secure the patents needed to protect the invention from theft. An organization was formed in 1788 to honor Rumsey and his work. According to The Rumseian Society website "The Rumseian Society was first created in Philadelphia, in 1788, to further the inventive career of James Rumsey, and was disbanded with his death, in 1792. It was re-created in 1903 in Shepherdstown, to build the Rumsey Monument that still stands overlooking the Potomac, and was re-created again in 1984 to build the Rumseian Experiment, a replica of James Rumsey’s 1787 steamboat."

In 1915, a monument was dedicated to Rumsey on the banks of the Potomac River in Shepherdstown to celebrate his contributions to steam-powered watercraft. According to the C&O Canal Trust website, "The James Rumsey Monument and Park overlooks the Potomac, the very river on which Rumsey demonstrated the first steamboat. 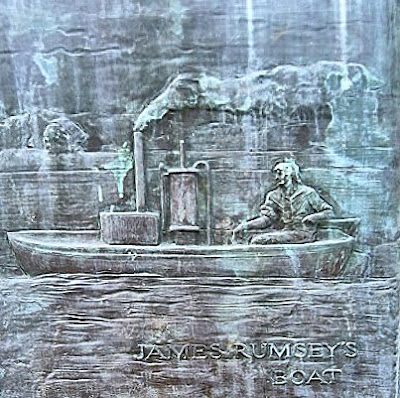 "Shepherdstonians began discussing a monument in the 1830s – undoubtedly to overshadow Robert Fulton, who often received recognition for being the ‘inventor’ of the steamboat. Completed in 1915, the 75-foot monument sits in the borders of its own park. A plaque mounted on one side of the monument reports how Rumsey “made the first successful application of steam to the practical purposes of navigation.” 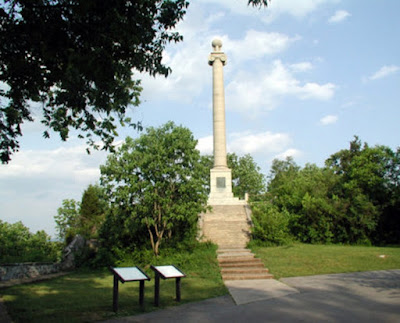 The Rumsey Monument in West Virginia

The demonstration shocked many local citizens. What is a “canoe powered by a teakettle?” they asked. The C&O Canal Trust website says it was the first steamboat. 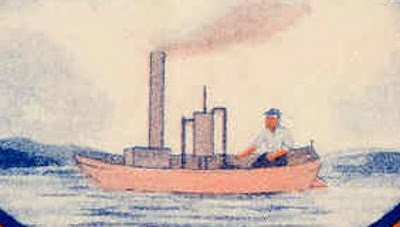 "The eccentric inventor James Rumsey shocked Shepherdstown during a December 3, 1787, demonstration when his boat – without traditional sail or oars – actually left the dock here on this stretch of the Potomac River.

“She moves, by God, she moves!” exclaimed one particularly doubtful veteran. The steamboat traveled about half a mile upriver and returned to the landing. During a second test eight days later, the innovative craft reached speeds of 4 miles per hour. 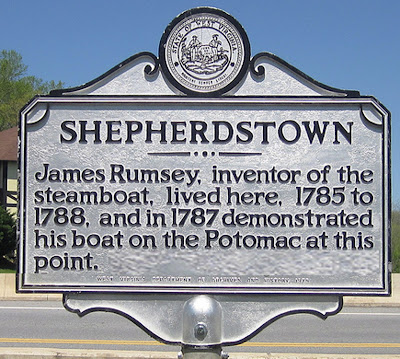 "Though Ramsey’s steamboat was first, many credit the invention to Robert Fulton, the man who mastered the production of the steamboat. But no matter whom the original inventor, the steamboat opened new worlds of navigation for the people of Shepherdstown, making opportunity and commerce easily accessible," concludes the C&O Canal Trust website.

And Donald Sharp was able to pinpoint where Rumsey carried out the early major design work for his steam-powered watercraft, near Bayou Lacombe and at the mouth of the Pearl River in St. Tammany Parish.

As soon as steam-propelled watercraft became available, riverboats became a principal transportation mode for river trading. And although Rumsey was working on backward thrust steam propulsion, the groundwork was laid for stern-wheeler and side wheeler steamboats as well as propeller driven watercraft.

Within a few decades of Rumsey's successful steamboat prototype, steamboats began plying the waters of the Mississippi River from New Orleans all the way northward. 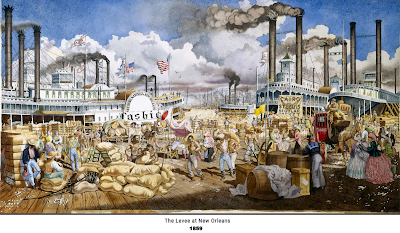 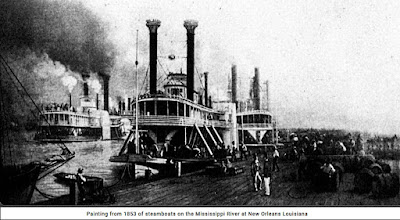 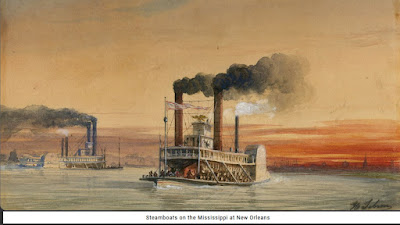 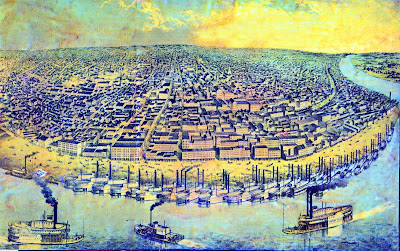 St. Louis, Missouri, 1850
It's good to know that St. Tammany played an early part in the invention of the steam-driven watercraft. Today's version of the backward thrust boat propulsion system? Jet-Skis and Wave Runners.


James Rumsey: The Inventor of the Steamboat