Names of People Drafted in World War I

A special edition of the St. Tammany Farmer was published on July 31, 1917, with the names of residents who were available to be drafted into military service for World War I, which had just started.

HERE IS A LINK to that edition provided by the Library of Congress and its Chronicling America service. 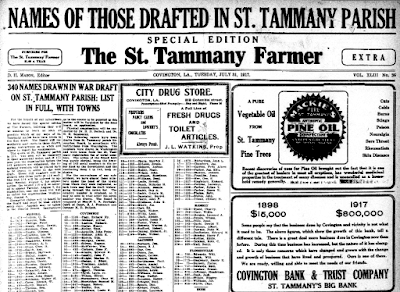 In 1973 Dayle Simonson was crowned the Farm Bureau Queen for St. Tammany Parish. Here is the article and pictures from 44 years ago. Click on the images to make them larger. 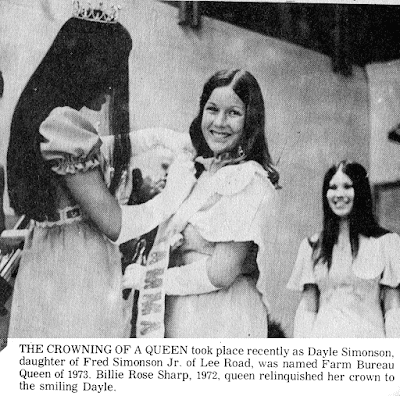 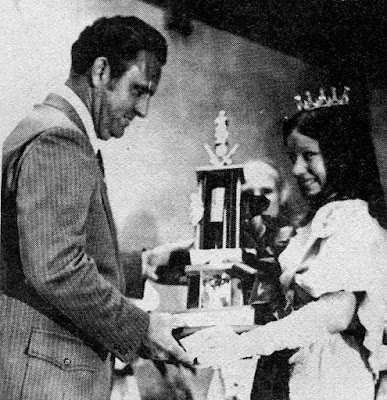 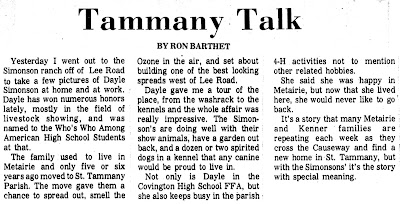 In 1925, Miss Hazel Dickson was named Queen of the St. Tammany Parish Fair. 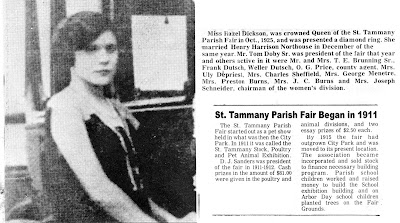 The SSA Graduating Class of 1936

This group photograph shows the 1936 graduation class of St. Scholastica Academy in Covington. Click on the image for a larger version. 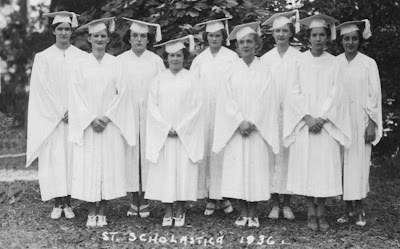 What was going on 100 years ago this week?

CLICK HERE for a link to the St. Tammany Farmer edition of July 28, 1917. The link is provided by the Library of Congress and its Chronicling America service.

Click on the images below to see a larger version of the picture. 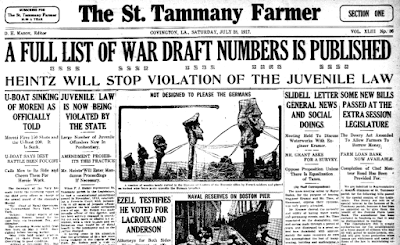 For hundreds of years, the Madisonville Cemetery has been the final resting place for those who lived in the Madisonville area. Several large oak trees grace the corners of the property, and the many graves, some with large headstones, some with small, tell the story of the people who came, started families, helped make Madisonville what it is today, then passed on.

Here are some pictures. Click on the images to make them larger. 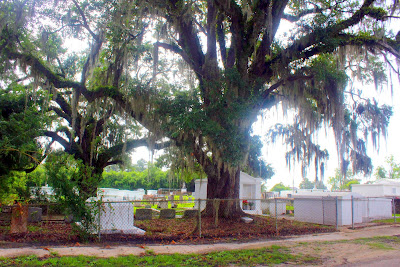 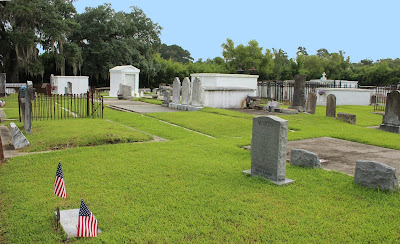 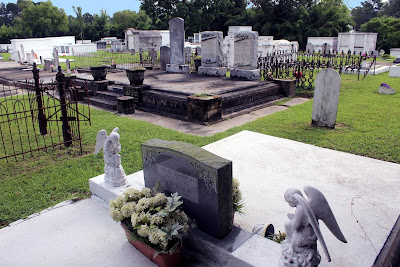 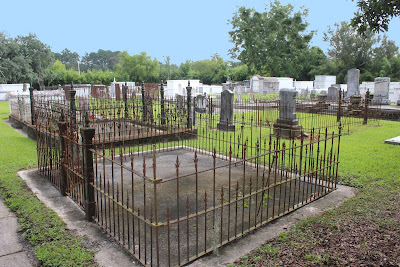 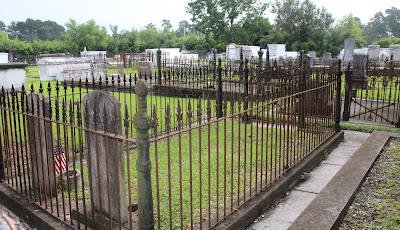 The Town of Madisonville recently gained legal ownership of the cemetery after some debate over who actually owned the property.

I just finished drawing the new pictorial cartoon map of Madisonville  for 2017. 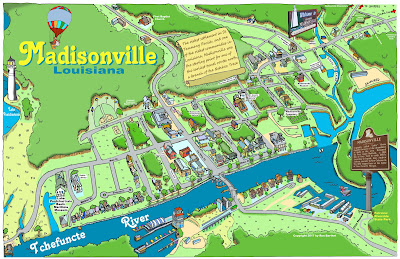 Here is a video showing the various stages it went through over the past several days.

Click on the image above to start the video. 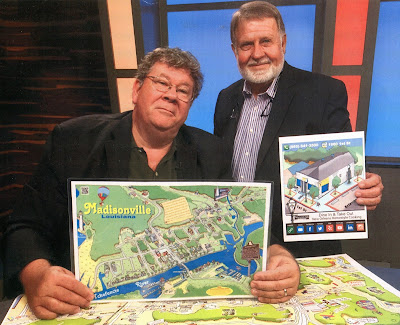 The map was featured on the Spud McConnell show during an interview with AG Crowe.

St. Tammany Parish has been home to a number of rest homes, resorts, hotels, cottages and other health-restoring retreats. One of the more famous ones in Covington was the Fenwick Sanitarium. 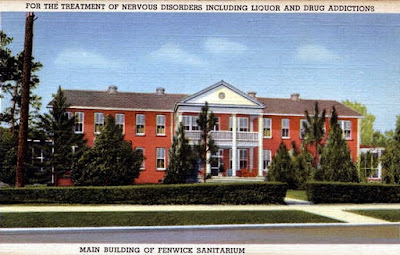 Click on the images for larger more readable version.

.
Takes Over New Southern for a Sanitarium

The drug and liquor habit has caused more suffering in the world than all the other evils combined, bringing suffering to the innocent friends, as well as wrecking the mind and body of him addicted to the hab­it. Any means by which such a per­son may be brought back to a state of usefulness and health should be heralded as a boon to humanity.

Dr. F. F. Young, of the Fenwick Sanitarium, of Abbeville, La., who has gained such a reputation for the excellent work he has done In this direction, has moved to Coving­ton, where he has secured the hand­some New Southern Hotel, fitting it up in excellent style for a sani­tarium, to be known as "The New Fenwick," a high grade sanitarium and hotel resort.
Dr. Young has se­lected Covington for its remarkable healthfulness, its nearness to New Orleans, the metropolis of the South and because it is easily accessible from all parts of the country.   The establishment of such a sani­tarium In Covington will no doubt bring a large number of people to The New Fenwick, for aside from the reputation Dr. Young has estab­lished by his successful treatment of the drug and liquor habit, the in­vigorating effect of our ozone-laden air cannot fail to give vital force and strength to the patients and win friends for both the Doctor and Cov­ington.

We understand that Dr. Young was highly complimented by Dr. Oscar Dowling, president of the State Board of Health, for the excellent sanitary condition of his resort In Abbeville. When a large institution of this kind can win praise from such an exacting sanitarian as Dr. Dowling, it shows that Dr. Young possesses not only medical skill, but the executive abili­ty to make his sanitarium a com­fortable home, with those attributes that make home attractive.

Dr. Young states that his sanita­rium, involves the expenditure of a large amount of money yearly and that his supplies are purchased in the local market, which means that quite a sum will be put in circulation in Covington as a result of the es­tablishment of The New Fenwick here.
St. Tammany Farmer June 15,1912


In 1912, Dr. F. F. Young used the Southern Hotel building as a sanitarium for a short time. While he didn’t occupy the building for long, wishing instead to build his own more medically-inclined facility, his connection to the building is one of considerable historical interest.
The word “sanitarium” may not mean today what it meant back then. In the early 1900’s, it  was a place for people with illnesses and drug addictions who could, with proper care and rest, be brought back to health. Covington was home to several “sanitariums” and cottages designed for health and recuperation.
Dr. Young, known statewide for his sanitarium in Abbeville, re-located to Covington and while here had several locations for his practice. “The New Fenwick Sanitarium,” billed as one of the finest institutions in the South, was moved to Covington for several reasons. 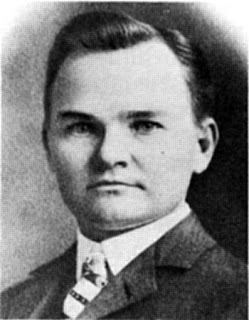 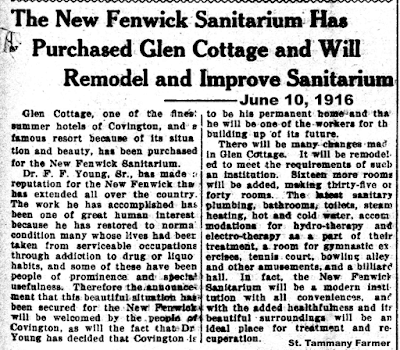 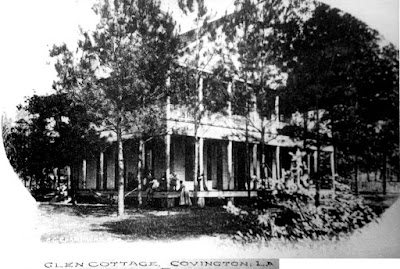 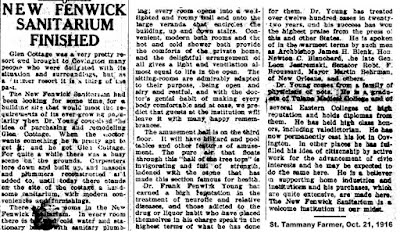 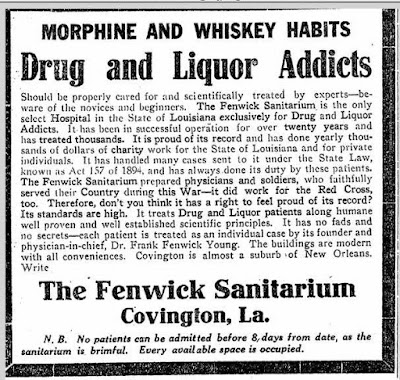 An ad from the Times Picayune 1919 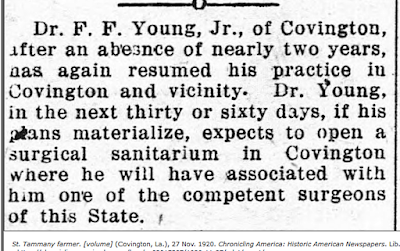 In 1925 the Fenwick Sanitarium burned to the ground. Labelled "the most disastrous fire Covington has had for some time," an article in the Farmer stated that the fire occurred just before noon on Saturday, April 11. It was discovered while all the residents had gathered for dinner and "by the time the alarm was given it had gained such headway that it could not be subdued."

Only part of the furniture on the ground floor was saved. "The Fenwick Sanitarium was considered to be one of the best in the South. It is not known just what arrangments will be made for its reconstruction or its new quarters. The patients are at this time being cared for at various quarters, as could best be arranged," according to the article. 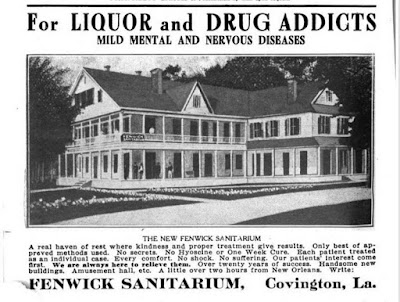 The history of Dr. Young’s efforts to build sanitariums spanned decades, according to Kenneth A. Dupuy with the Vermillion (Parish) Historical Society. Dr. Francis Fenwick Young established his first renowned Fenwick Sanitarium first in Hot Springs, Ark., in December of 1899, followed by moving the facility to Abbeville, La.
Dupuy goes on to recount that Dr. Young’s “private office and operating room housed ‘the latest improved instruments and appliances,’ for the treatment of the diseases of the ear, nose and throat, electro-therapeutic appliances, and ‘splendid equipment for treating lung diseases by the inhalation of certain drugs in the form of pleasant soothing vapors." His sanitarium built in Abbeville continued his success in treating of the above illnesses.


On February 6, 1906, however, a fire broke out in the sanitarium during a "blizzard and sleet storm." The building was destroyed.


Dupuy stated that in February of 1908, Dr. Young was organizing a corporation with a capital of $500,000 for the operation of sanitariums in New York, Chicago, St. Louis, and Los Angeles. Again, the treatment was for "drug and liquor addictions." Later in 1908, however,  Young met with financial reversals, and on November 14, 1908, the charter of the Fenwick Sanitarium, Ltd., was filed.  Dr. Young no longer owned the sanitarium he built.

The Move To Covington


After securing a new location for his sanitarium in Covington, Dr. Young moved from the Southern Hotel and continued to offer his services to a wide variety of visitors. A new building built by Dr. Young specifically for use as a sanitarium is still standing on South New Hampshire St. in Covington. 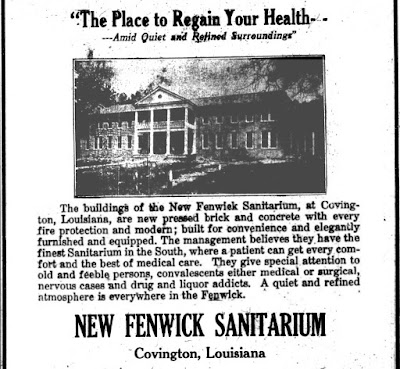 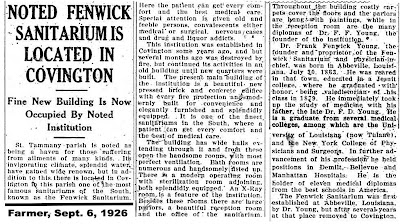 Dupuy ended his historical account of the Fenwick Sanitariums by noting that Dr. F. F. Young, Sr. died on September 26, 1945, at the age of 82.  “One of his grandsons, Federal Judge Richard J. Putnam, told how his grandfather had loaned him $300 for tuition for his last semester in law school. When Judge Putnam repaid the loan, Dr. Young implied that he had not expected to see the money again. The judge said that his grandfather was like that: too generous with his friends and relatives.
See also:
https://cajunheritage.wordpress.com/abbeville-louisiana/