Information about the background of the parish is found on the St. Tammany Parish Government's website, on its history page. To view the original webpage, CLICK HERE.

Exploration of a New World
1519, the Spanish explorer Alonso Alverez de Pineda led an expedition along the northern shores of the Gulf of Mexico. He discovered the mouth of a great river- in all likelihood the mighty Mississippi.

The French Take Possession
The first explorer to travel down the Mississippi River to its mouth was Frenchman Sieur de LaSalle. In 1682, he took possession of "the country known as Louisiana," naming it in honor of his king, Louis XI V. Spanish Possession
In a secret treaty in 1762, France ceded its territory west of the Mississippi to Spain. Colonist in Louisiana didn't learn of the transfer for almost two years!

Enter the British
In 1763, great Britain acquired parts of Louisiana east of the Mississippi from France and Spain in the Peace of Paris that ended the French and Indian War.

Return to the French
The cost of maintaining distant colonies and worries about restless Americans who wanted to control the land led Spain to return the Louisiana territory west of the Mississippi to France in another secret treaty in
1800.

An Independent Territory
In 1810 colonists took control of the area east of the Mississippi River. It was part of Spain's West Florida Territory. That same year this republic joined the United States as part of the Louisiana Territory The area is still referred to as the Florida Parishes (Louisiana is divided into parishes instead of counties.) The flag is known as the "Bonnie Blue."

The Civil War
The longest siege in American military history took place in 1863, when Confederate troops at Port Hudson held out for 48 days. Their surrender, five days after the fall of Vicksburg, marked the end of Confederate control of the Mississippi River. 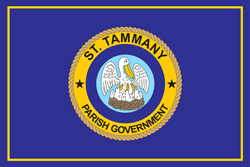