One of Lacombe's most cherished treasures was the couple who represented the last few remaining Choctaw Indians living in the area. I enjoyed spending an hour with them back in 1972, asking them about their heritage, what they thought of the world as it was then, and how they enjoyed living in the Lacombe area. 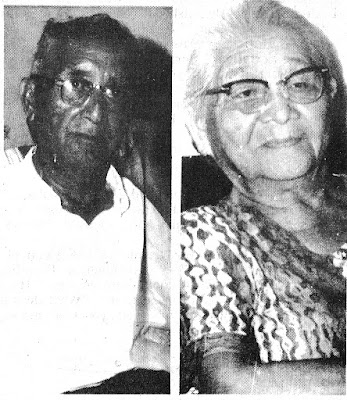 One reason they were the center of attention of many visitors to the area was their reputation for the baskets they made, sought after for their authenticity and beauty, as well as their usefulness. The article I wrote about Mr. and Mrs. Samville Johnson appeared in the Sept. 16, 1973, Edition of the Northlake Sunday News.

Just outside Lacombe on Pontchartrain Drive live Mr. and Mrs. Samville Johnson. They live in a small home which Mr. Johnson built himself many years ago. They are often hosts to a wide variety of visitors, ranging from college professors, and experts in linguistics to New Orleans tourists.

It isn't easy to be the only two Choctaw Indians left in St. Tammany Parish.

But they take all this attention in stride, doing what they can to help the visitors looking for authentic Indian woven baskets and the linguists trying to record what's left of the Choctaw language.

Mrs. Johnson used to weave baskets out of palmetto reeds. Her talent was well known and people would travel far and wide to buy her skillfully designed baskets. Not long ago, her doctor warned her to cut down on her work, however, and now she is unable to fill a backlog of basket orders that grows almost daily.

"I'll never be able to catch up," she says, but she is not really worried. She is teaching another woman nearby how to weave the intricate baskets so that at least some of the customers will be able to obtain the baskets.

Mrs. Johnson once sent two of the baskets to President Lyndon Johnson's wife, Ladybird. The president's wife wrote back to thank her, commend her on her Choctaw heritage and said that the baskets would be used at their Texas home. This letter from Ladybird was framed and placed on the television set in the living room where Mrs. Johnson can look on it often with pride.

Mr. Johnson is often amused by visitors coming by with tape recorders wanting to catch some of the Choctaw language.

"One fellow came by with a list of 160 words he wanted me to translate into Choctaw," he said, "and I did pretty good. I didn't think I would remember all of them, but I gave him all he asked about. He said he had talked to a tribesman somewhere in Arkansas and noted that most of the words were the same." Then Mr. Johnson laughed.

"He asked me what the Choctaw word for ashes' was and I told him it wasn't the same word that the tribesman in Arkansas had told him. So he thought there was a difference in the two languages for the word 'ash.' But that wasn't the problem, the problem was that the other Choctaw had given him the word for 'soot,' the stuff  that falls out of your chimney.

"I guess he couldn't remember the word for ash so he just substituted the word for soot. There's a difference, you know."

While both Mr. and Mrs. Johnson can understand Choctaw, it's difficult for them to hold a conversation in it. It's been so long since they talked with each other in Choctaw, they have tended to forget some of the conversational rules. Once one of the linguists asked them to converse between themselves in Choctaw so that he could record it. Mr. Johnson led the way, finding it awkward to invent a conversation. Mrs. Johnson couldn't think of anything to answer her husband's comments with, so she just repeated what he said. It wasn't much of a conversation, they laughed, but the fellow with the tape recorder seemed satisfied.

Once in a while, the couple will come across a member of their tribe who can converse with them in Choctaw. Some time ago they went to Oklahoma and spent some time visiting with Indians there. It was good to find friends who understood the culture and some of the language, the Johnsons said.

Mr. Johnson is 78 years old, as is Mrs. Johnson. He came from Tangipahoa Parish, while she is originally from the Pearl River area. They met in lacombe while he was visiting an aunt there. She has relatives in Bay St. Louis and that area, principally the Farves.

One of Mrs. Johnson's prize possessions is an old Bible printed in the Choctaw language. It was printed in New York in 1913 by the American Bible Society. She is unable to read it, because she never went to school to learn how to read Choctaw, but she has had it for many years.

She also keeps an English version of the Bible on hand, a copy given her some 30 years ago by a minister visiting them. She also keeps a variety of baskets given her by various other tribes in the state.

She wishes she could fill the backlog of orders for her baskets, but working on them strains her back and is not good for her eyes. Until her "student" finds time to learn and start turning out baskets at a regular rate, then the Lacombe Choctaw basket manufacturing is for the time being postponed.

They both enjoy the area, saying that Lacombe has changed quite a bit since when they first came. "Why, when we first moved across the creek, I bought just a little land to put a house on," Mr. Johnson said. "Back then it was $50 an acre and I didn't think we had to worry about neighbors for some time. But now I wish I had bought more land when I had the chance. It's getting so crowded back here now, it's almost like a subdivision."

Their television set gets little use. "Oh, I like to watch the news now and then, but all those other programs are just'stories,' " Mr. Johnson said. "Just stories," Mrs. Johnson agreed.

In their living room they have several items indicating their Choctaw heritage, a personally autographed book on Indian tribes in the South, as well as photographs of their mothers. They live a comfortable life, and Mr. Johnson busies himself in keeping their front yard trim and well kept.

And from time to time they entertain a variety of visitors ranging from college professors to New Orleans tourists looking for baskets. They enjoy their visitors. It isn't easy being the last two Choctaw Indians in St. Tammany Parish, but they enjoy the attention.


Click on the image below to make it larger. 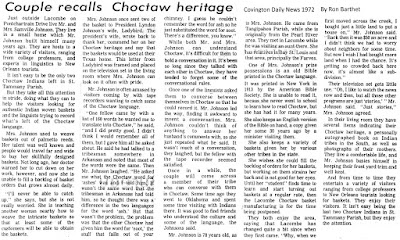 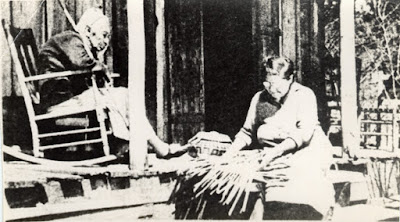 Mathilde Johnson and her mother making Indian baskets in Lacombe

A plaque at the Chalmette Battlefield monument explains the importance of the Choctaw Indian nation in early American history. 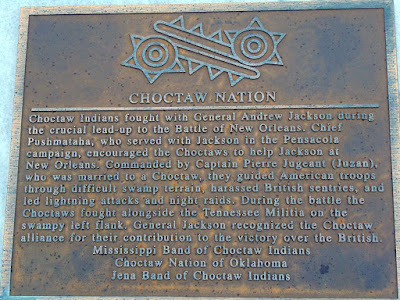