In  December of 1977, a group of new authors who lived in west St. Tammany were invited to the public library for an "Authors Night." It was a good cross section of the people and publications that were going out at that time, and the Slidell Times covered the event. Click on the image below to see the article and photo. I was a part of that group because I had just self-published my collection of science fiction short stories.

A few years later, the library published this list of local authors... 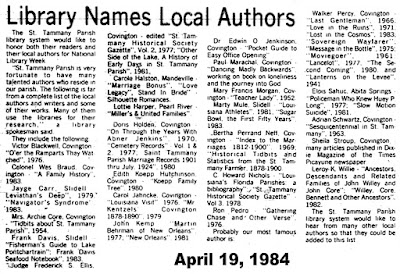 Text from the above article:

The St Tammany Parish library system would like to honor both their readers and their local authors for National Library Week. St. Tammany Parish is very fortunate to have many talented authors who reside in our parish. The following is far from a complete list of the local authors and writers and some of their works. Many of them use the libraries for their research," a library spokesman said.

They include the following: 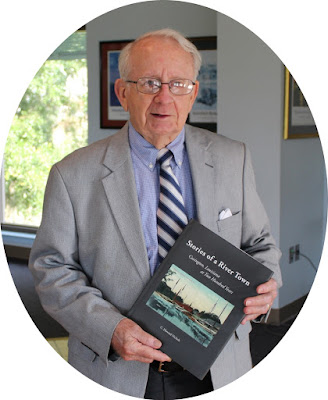 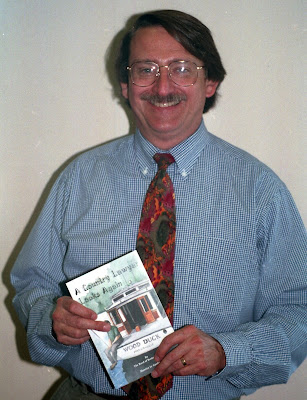 One of the area's most prolific writers and poets is Maurice LeGardeur of Covington. An attorney by day, he has written and published several books. Shown above is "A Country Lawyer Looks Again." A native of New Orleans, he began writing poetry in 1982 and became known as "The Bard of Boston Street." His most recent project involves books entitled "Mona's Law," a series of cartoons about the law and lawyers, as seen from a legal secretary's viewpoint.
His books include: So much for the mountains: Poems and phrases from the highlands; Carnival in New Orleans: A Fantasy; Mona's Law and Disorder; Gulf Coast Stimulus Package; A Country Lawyer Looks Back; A Country Lawyer Looks at Life; Mona's Crusin' The Coast; and Natchez Reverie. 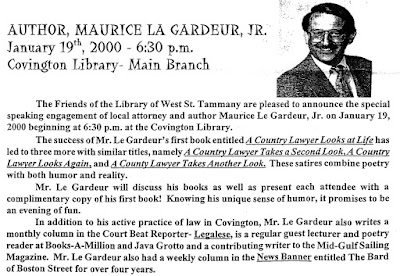 Ron Barthet has also written a few books: two science fiction books, one Cajun comedy book, a history of the Southern Hotel, a book on procedures on how to tape family history interviews with relatives, and a few cartoon books, including one on holiday fruitcakes, a collection of cartoon maps, and imaginary festival posters.  He's also done a few prints: a variety of pictorial maps, old photos of Covington, scenic pictures of trees and water, Barker's Corner 1975 aerial photo, Boston Street sunrise, and a montage of the Dixie Trail Ride.
Here's a list: "Reveling," 1969; "Going Whacko and other Science Fiction Stories," 1977; "The Gafferty Perspective," 1994; "The Gafferty Momentum," 1997; "Cajun Gold," 2008; "The History of Sun," 2017; "The Southern Hotel-Covington Legacy," 2018, "The Pictorial Cartoon Maps," 2019, and "Posters from Imaginary Festivals and Conventions," 2019; "The Bridges of St. Tammany," "Abita Springs Photographs and Articles; "Folsom-Yesterday and Today," "Madisonville's Vantage Point Upon History;" "The Time When," 2022; and "Going Knots," 2022. He has published more than 50 cartoon pictorial maps showing bird's eye views of towns and cities, many of which may be viewed by CLICKING HERE. 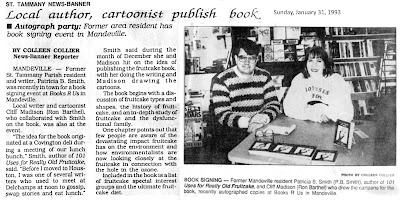