Elmer F. Bennett was a St.Tammany Parish resident in 1974, one of many airline pilots who lived in the area. In fact, St. Tammany was home to a large number of pilots in the late 1960's and early 1970's, many of them notable for their accomplishments. Here is an article about Bennett's contributions to the airline industry and his career recognitions.

I enjoyed interviewing him for the following article: 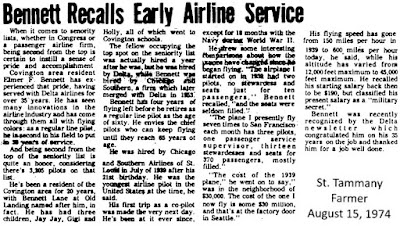 When it comes to seniority lists, whether in Congress or a passenger airline firm, being second from the top is certain to instill a sense of pride and accomplishment.

Covington area resident Elmer F. Bennett has experienced that pride, having served with Delta airlines for over 35 years. He has seen many innovations in the airline industry and has come through them all with flying colors. As a regular airline pilot, he is second in his field to put in 35 years of service.

And being second from the top of the seniority list is quite an honor, considering there's 3,205 pilots on this list.

He's been a resident of the Covington area for 20 years, with Bennett Lane at Old Landing named after him, in fact. He has had three children, Jay Jay, Gigi and Holly, all of whom went to Covington schools.

The fellow occupying the top spot on the seniority list was actually hired a year after he was, but he was hired by Delta, while Bennett was hired by the Chicago and Southern, a firm which later merged with Delta in 1953.

Bennett has four years of flying left before he retires as a regular line pilot at the age of sixty. He envies the chief pilots who can keep flying until they reach 65 years of age.

He was hired by Chicago and Southern Airlines of St. Louis in July of 1939, after his 21st birthday. He was the youngest airline pilot in the United States at the time, he said.

His first trip as a co-pilot was made the very next day. He's been at it ever since, except for 18 months with the Navy during World War II.

He drew some interesting comparisons about how things have changed since he began flying. "The airplane I started on in 1939 had two pilots, no stewardess, and seats for just ten passengers," Bennette recalled, "and the seats were seldom filled."

He recalled his starting salary back then to be $190, but classified his present salary as a "military secret."

Bennett was recently recognized by the Delta Newsletter which congratulated him on his 35 years of the job and thanked him for a job well done.

Newspaper article printed in the St. Tammany Farmer on August 15, 1974