John Fahey, a writer for the Times Picayune many years ago, covered the Florida Parishes. He once wrote a tribute to Julius "Tugy" Tugendhaft, telling of his many civic contributions, especially in the area of community sports and youth athletic programs.  Tugendhaft died on Saturday, October 23, 1971.

His obituary in the Hammond Daily Star newspaper noted that he was 71 years of age at the time of his death, a resident of Covington, and a native of New York, NY. He was a past president and past member of the Board of Directors of the Covington Rotary Club, past president of the Community Center Organization, inc., chairman of the Community Christmas   Fund for underprivileged children and a sports enthusiast who officiated for the past 13 years at boxing, baseball and football events. "He was the recipient of a special award,"Mr. Citizen," by the Covington Chapter of the Business and Professional Women," the Hammond Daily Star obituary said. 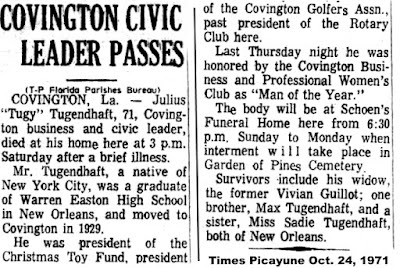 While generally known as the owner of Tugy's Bar in the Southern Hotel building, Tugendhaft was quite a supporter of Covington even though he wasn't a native to the city. When the building briefly served as the St. Tammany Parish courthouse, his bar gained the honor of being the only bar located inside a courthouse. Thanks to Fahey's article, Tugendhaft's many outstanding community volunteer efforts were recognized by all. Fahey wrote the following article shortly afterwards as an attempt to have the Covington Community Center named after Tugendhaft. 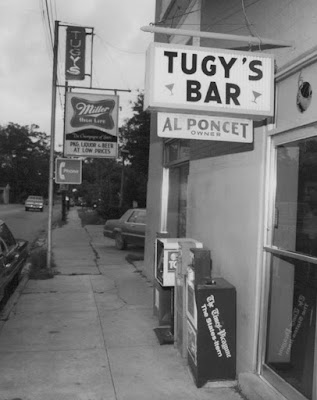 Tribute To Tugendhaft
By John Fahey

There was nothing that "Tugy" couldn't get done— be it organize a Covington Golfers Association, along with some of his buddies; supervise a worthwhile charity drive; be the lone official for years in the oldest basketball tournament in the state, the Covington Invitational, or just give a fellow a helping hand . . . and all of St. Tammany Parish, as well as a good part of several other parishes, are a little duller today because of the death of Julius "Tugy" Tugendhaft Saturday.

Tugy's reputation was one that people in high places called him Mister, not that he expected or even wanted it, but because they knew of his charitable work, of his devotion to sports and the youth of the area. But while Tugy was at ease with the wealthy he was never pompus, and was equally at home with those who did not belong to the country club set.

No better examples are his organizing of the Covington Golfers Association, of which he was president for years, and his annual charity drive for the sponsoring of the community Christmas celebration for the needy children at the St. Tammany Parish Courthouse.

Tugy almost single-handedly collected the donations to see that every child in the parish was remembered for Christmas and got candy, cookies and at least one toy. With his gentlemanly persuasive way he received $100 donations from the top boys and 50 cents from the not as fortunate worker.

I asked Herb Pailet of New Orleans, commissioner of the American Baseball Congress in Louisiana for his remembrance of "Tugy." Pailet said Tugy was one of his boys at the old YMHA (Young Men's Hebrew Association) at St. Charles and Clio back in the 1920s.

"Tugy competed in all sports for me when I was athletic director for the center and he could really hit that ball in the indoor baseball league.

"'He played third base in the indoor as well as regular baseball and was a guard in basketball. He made several trips with me as a member of the team that competed in Kansas City ir the Southern AAU champion­ships."

The Covington Golfers Association was formed to promote golf among young people, as well as middle-aged, that couldn't or didn't care to belong to the country club. Tugy fought and continually was able to keep the dues at $3.00 per month and the association had full use of the Odenheimer Course on the Folsom Highway. Tugy personally saw that the fairways and greens were kept in good shape and always playable.

When the Covington Invitational basketball tournament be­gan, Tugy would call no less than 30 or more games by himself and many Covington area, middle-aged men can remember him jaunting down the court on a foul shot with the basketball on his hip.

One of his pet projects was the Covington Community Center, which he and about nine other men helped organize. The CCC began as a dream for these men—it was to be a place where all of the children, no matter what age, could come and play sports—indoor as well as outdoor.

They began with a shell of a barn at the old Fairgrounds and each of them signed a personal note for $10,000 to see the building was completed.

It would be a fitting tribute to such a man that the Community  Center Organization consider renaming its building the TUGY MEMORIAL COMMUNITY CENTER. This building serves as a focal point for social events of the community, also and Tugy would not only see that the proper janitorial work was taken care of—that a good band was on hand—but he also was one of the organizers of the "Fun Club." Through the years some of the Club's members have been lost, and now probably the hardest worker of all has been laid to rest.

But Tugy would not want tears—for he was a happy and fun loving man. He never worried or was depressed a day in his life and he left this world in a manner that fitted this fine gentleman—watching a football game on television.

As a "come-here" Tugy introduced me in 1957 to most of the area sports community himself and personally saw that I took up the game of golf by giving me my first 50 practice balls and selling me his old set of golf clubs—which I honestly believe he almost gave me too!  He came to Covington in 1929 from New Orleans and in 1935 , opened Tugy's Bar in the Southern Hotel. He retained that bar until 1965 when he sold it to Alton Poncet—but he continued to work for Al "because I like to see my many friends and I'm too young to retire." 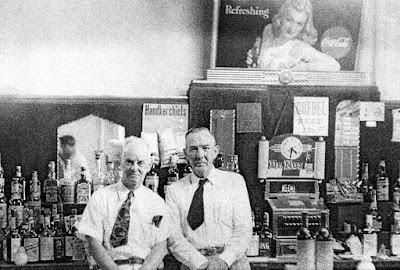 He was 66 years old at the time, but even as late as last week played golf, attended dances with his wife, and had a bicep that would make a pro gridder respect him.
Tugy would be the first to challenge Covington and the area—make the things that were meaningful for him even better and I'm sure he would be happy knowing that even his death served a purpose as an inspiration for others to improve youthful activities and other programs in his name. 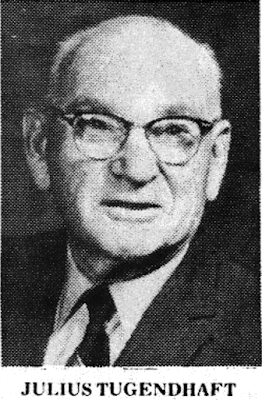 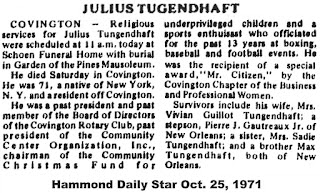