Shipbuilding has long been a mainstay of the Madisonville economy, and a 1918 article in the Times Picayune newspaper explained just what a great event a ship launching was in the community (even when the ship got stuck half way down the ramp to the water).

Here's the newspaper story, along with a wealth of information about the shipyard, the shipbuilders and the community that supported them. Remember that this took place during the last year of World War I.

One of the largest ocean-going tug boats ever constructed, and the workmanship on which even caused its New York architect to declare it was unequalled, will slide down the ways of the Gulf Shipbuilding Company at Madisonville, LA, within the next day or two. She was built for the Southern Oil and Transportation Company.

Madisonville has become one of the most important shipbuilding points along the Gulf Coast. The Jahncke shipbuilding company has government contracts for five wooden ships well underway, and it is making rapid preparation for the building of twelve steel vessels there, contracts for which were awarded them by the Emergency Fleet Corporation.

Shipbuilding Transforms Town
The placid Madisonville of a year ago is ancient history. The shipbuilding yards of the Gulf Shipbuilding Company and the Jahncke Navigation Company have destroyed its sleepy peacefulness and made it a hubbub of industry.

The men of Madisonville have been building ships for a century, and it was at this location Andrew Jackson embarked his tattered colonials for New Orleans to fight the English foe in 1815. Ships were built in Madisonville in those days and this has always been the principal industry there.

When the country called for big vessels to replace those destroyed, Madisonville furnished workmen who had inherited the art of construction boats. The men of Gloucester may be the greatest seafarers, but the men of Madisonville have proven themselves experts in shipbuilding.

Hermason Excels In Every Detail
This explains why even the raw landlubber enthuses over the big ocean-going tugboat "Hermason," which has been completed on the ways (cradle and ramp) of the Gulf Shipbuilding Company there. She is a trim, powerful vessel, built under the supervision of the British Lloyds, the strictest of all maritime construction requirements, and given the rating of "100-A-1" for 18 years by it.

Every stick in the Hermason is of Louisiana yellow pine and cypress. Her keel and keelsons were laid last June, but the other work of construction did not begin until the latter part of August. The most impressive part of the vessel is the strudiness illustrated in her powerful lines. She is 140 feet long, of 28 feet width, and 14 feet 6 inches depth. She has a 900 ton capacity and an estimated speed of 12 knots an hour drawing two heavily laden oil barges. She is to be used in the work of hauling barges loaded with oil from Tampico, Mexico, to New Orleans and New York. She was built for rough service and she looks fit for it.

Workmanship Superb
Workmanship on the Hermason is superb. The copper sheathing which covers her wooden sides from the waterline to the keep is wonderfully smooth, revealing the perfection of the workmanship of the wooden hull beneath. The tugboat is made of stout timbers, the keel and keelsons of yellow pine and the framing, planing and ceiling of cypress.

Her interior fittings will be of the same powerful manner of construction as the hull. Triple expansion Scotch engines of 1000 horsepower, two boilers of the latest maritime type and a 12-foot propellor, will make her a fitting rival of any tugboat afloat. She will use crude oil for fuel, and all of her storage space will be devoted to the carrying of oil.

When the Hermason moves down the ways into the Tchefuncta river, she will be towed across Lake Pontchartrain and through the Lake Borgne canal into the Mississippi River. She will be placed in the drydock of the Johnson Iron Works, where her rudder and propellor will be attached. These would have been attached at Madisonville, but for the delay in their arrival from the East.

An idea of the freight congestion existing throughout the country, especially in the East, is given in the non-arrival of the rudder and propeller although they were shipped more than six weeks ago.

The Hermason was to have been launched Saturday afternoon. She was started down the ways, but after going half the distance, she became stuck. It will require further efforts to ease her down. The work will be resumed Monday morning.


Ship Launching Event
All of Madisonville turned out out to witness the launching, and failure to complete it caused a pang of disappointment to the residents on hand to see the greatest event in the history of the town. Even the several hundred workmen engaged in the work of constructing the ships in the plant of the Jahncke Shipbuilding Company, adjoining that of the Gulf Shipbuilding Company, ceased their work for a while to view the expected launching.

They were as much disappointed as the men in the Gulf plant when she failed to make it all the way down.

Paul Jahncke of the Jahncke Shipbuilding Company had taken a party from New Orleans on his cruiser, the Chiliktah, to view the launching. Little Miss Josephine Alton, daughter of J. E. Alton, had the real disappointment of the afternoon. She was to christen the boat, wore a pretty silk dresss and carried a large bouquet, but the boat wouldn't move so she could break the bottle of champagne across its bow.

The Gulf Shipbuilding Company is building another vessel for the Southern Oil and Transportation Company. It is a 500 ton river towboat, sternwheeler, to be used on the Panuco River in Mexico. This company has 51 square miles of oil lands near Tampico and a daily capacity of 18,000 barrels of oil. The shipbuilding company is laying ways for a 900 ton four masted schooner to be built for the account of A. H. Clement and Company.

Workforce Expected To Double
When the Jahncke Shipbuilding Company gets to work on its steel shipbuilding program, the force of workmen at Madisonville is expected to be more than doubled. The ways for one of the steel ships already are being laid and the others will follow in rapid succession. All ships of this company will be entirely completed before they leave the Tchefuncta River.

No difficulty will be experienced in getting them across Lake Pontchartrain and into the Gulf of Mexico, as the government recently has dredged the shallow pass between the lake and gulf, and which will allow for the passage of any size ship without cargo.

To care for the unusual number of workmen it has been necessary to provide additional sleeping quarters for the men. A neat hotel has been built by the Jahncke Shipbuilding Company in addition to a number of neat cottages for workmen with families. This is in addition to two quarterboats and the splendid houseboat, Aunt Dinah, which belongs to Ernest Lee Jahncke, and which have been pressed into service to house the workmen.

Railroad Line Being Built
One of the greatest improvements for Madisonville is the building by the Jahncke company of a railroad line connecting it with a branch line of the Illinois Central. Despite its age of nearly 200 years, Madisonville has never known a railroad. The highways of that vicinity also are being greatly improved and splendid shell roads are being constructed.

For more information about the Jahncke Shipyard, click here. 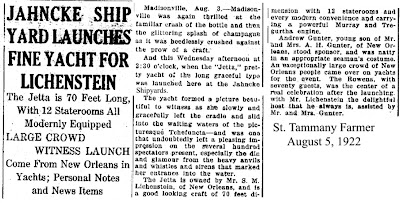