The West Saint Tammany Chamber of Commerce put out an article a few years ago about the art treasures housed at St. Joseph's Abbey a few miles north of Covington. You will find the text of the article below, which was a tourist promotion project conducted by the chamber.

One wouldn't expect to find the world's largest mural of The Last Supper at a monastery in a tiny southeast Louisiana town. But, expect it or not, that's just what the small community of Benedictine monks believe they have.
Painted by Benedictine artist Gregory deWit in 1946, the mural covers the entire west wall of the Refectory (dining room) of the Abbey St. Joseph located about 35 miles north of New Orleans.
Measuring 98 by 21 feet, the mural is full of bright, pure, and rich colors and is the focal point of all the other wall and ceiling paintings. Figures in all the paintings face toward The Last Supper, symbolically indicating Christ as the center of Creation and all that Creation shares in the preparation of the material elements essential to the sacrifices of the Eucharist. 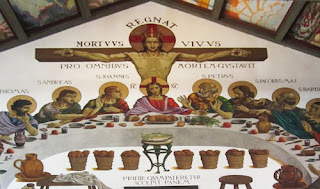 Above it, the Latin inscription proclaims that "Christ, though slain, yet lives and reigns."
Father Gregory's talent continues in evidence in the wall panels depicting Adams and Eve, Abraham, Joseph, Elias, Moses, Manna from Heaven, the Paschal Supper, and the Good Shepherd. On the ceiling of the Refectory are 56 panels on which the artist depicts fire, air, water, and Earth with the signs of the Zodiac, Chinese pheasants, various fishes and animals.
As one leaves the Refectory, a large painting of Saint Benedict dominates one's view. In one hand, he holds a staff indicating the office of Abbot and in the other hand the Rule, the code of life for Benedictine monks.
Father Gregory worked on the murals between 1946 and 1950. The monastery was founded in 1889 at Gessen, La., about 20 miles southwest of its present location. It moved to its current 1200 acre site north of Covington, La., in 1901. By 1906, the monastery has five buildings, a prospering school and thriving crops.
The following year, a fire destroyed all of the wooden structures, along with the books and personal effects of the monks. Determined to stay, work began on new buildings, this time in brick. One of the first buildings constructed was the Refectory. It and the Abbey church, constructed in 1932, are parts of the Abbey best known to the public because of their magnificent religious art. Father Gregory was a native of Holland with extensive art training in Europe who came to the United States to paint the St. Heart Church in Baton Rouge. Meanwhile, World War II began and when he finished his work, he went to Abbey St. Joseph to stay. Working with Father Gregory this time was a young Swiss artist Milo Puiz. The practiced eye can discern the differences in the style of the two artists.
Father Gregory's work shows great character in the personages he painted and there is enormous detail in his work, especially in the elaborate folding of cloth in the robes. Milo's work is more simple and direct.
In the high point of the half dome is the figure of Christ, symbolically bringing life to the world. He is rising on the wings of Cherubim. Beneath this, the artist has land and water with angels underneath holding up Creation.
The angels are separated by niches; their wings folded over each niche in the lower dome so as to encapsulate evil. Depicted within each niche is one of the capital sins. Satan is in the center niche directly below Christ. The satanic depictions are in very dark colors almost undetected at first sight.
At the base of the half dome are stained glass windows showing the figures of Melchizedek, King David, Isaiah and Daniel from the Old Testament to John The Baptist, who was a precursor to the New Testament.
A smaller full dome resting on four massive arches precedes the half dome and is directly above the altar. It is adorned with floating angels. Shown on the walls are the Virgin Mary's marriage to Joseph, the Annunciation, the Nativity, and the Feast at Cana. The Christological series follows, though somewhat overlapping, with His coming being announced, His birth, crucifixion, resurrection, and ascension.
Then begins the cycle of the Holy Spirit who comes at Pentecost, and the Virgin Mary ascending into Heaven. St. Benedict, the founder of the Order, and his sister, Saint Scholastica, and other saints are depicted.
The remaining walls contain paintings, all with Latin inscriptions, explaining the person or event. A large mural over the entrance to the church depicts the Final Judgment with the faithful from all walks of life.
Father Gregory, an outstanding and creative artist, had a sense of humor that came out in his works. For example, he put two altar boys dressed in the 1950 style altar robes in the portrayal of the marriage of Mary and Joseph. Showing an event taking place in Palestine, he placed a bunch of magnolias, a flower popular in the area and the rest of the South. In the Final Judgment mural, the artist portrayed himself.
The 60 monks of St. Joseph generously share their art with the outside world and lend their talents to the community. They have three apostolates: St. Joseph Seminary College, a four year liberal arts college for men preparing for the priesthood; the Christian Life Center, a retreat house; and the Abbey Youth Camp, a summer program operated with the Knights of Columbus.
Visitors may tour the grounds and view the art in the church during daylight hours. The Abbey is located in St. Benedict, La., off La. Hwy. 25 about four and a half miles north of Covington.