The community theater Playmakers Inc. has been around for a long time. The western St. Tammany theatrical arts organization began in 1955, and for a look back at how it all started, see the following link.


CLICK HERE FOR A LINK TO A PDF File featuring an article from a 1955 New Orleans Dixie Roto magazine. The magazine was published on Sundays and inserted into the Times Picayune. 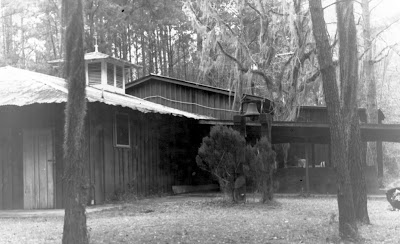 Here is another early history of Playmakers, printed in a 1981 Chamber of Commerce magazine. Click on the image below to enlarge the article.

In a recent interview, Judge Steve Ellis, one of the people who was involved early on in the formation of the little theater group, said the following:

"Dot Magruder was doing a fund-raiser for the Covington Grammar School PTA in 1954/1955, and they decided they would put on a play. The original people involved included Patsy Clanton and the Landons and the Magruders, but not me. They were looking for a place to hold rehearsals, so my wife Betty and I offered them the use of our dining room, which was a big room in an old house on America Street."

" I must admit that I was an extremely shy young man," Judge Ellis went on to say. "It would pain me to get up in the courtroom and confirm a default. You can imagine what it was like getting up on stage and saying lines. But I did. We put the play on two nights in the Covington Grammar School gymnasium. It was entitled "Too Many Husbands."

"We did it a couple of times at the gym to raise money for the PTA, and we saw how much fun it was, so we decided to put it on for ourselves. We did the play in Mandeville and charged admission and made $75. We put it one more time at Southeast Louisiana Hospital, playing right there in front of the inmates."

"That was the end of the run for Too Many Husbands, but we decided that we would like to do more of them, so we had a few more meetings. At the second meeting we decided we would elect officers, and I got elected President. Lester Landon was the guy who should have been elected President because he had the theatrical background. He had done a lot of it, and he was vitally interested in it."

" We put on the next show, I don't remember what it was called, maybe "Curious Savage." Patsy Clanton had the lead in the second play, and I had a minor role. It was about inmates in an asylum. It was a very funny play, and it played very well. I think we put it on in the high school gym," Ellis said. "And it was well-received."

As an attorney, he did all the legal paperwork needed to make the group officially Playmakers Inc.

The Playmakers Barn
How the Playmakers acquired their theater site was also an interesting story. The Sans Souci Creamery was a successful business in the early 1900's. Here is an account of the dairy from a booklet published in 1905:

"Sans Souci" Creamery is a new enterprise in this section of the country. This Creamery equipped with the latest improved machinery can take care of the products of 1,000 cows, and has a daily capacity of 2,000 pounds of butter daily.

"The purest and very best creamery butter is turned out and is known as the "Sans Souci" Brand: the finest stock of high grade Jersey cattle furnishes the milk; the cattle is watered with pure spring water.

"The Creamery is picturesquely located on a high bluff of ground overlooking the Bogue Falaya; it consists of 220 acres on which is located a very fine pasturage; this Creamery is conducted on scientific lines. An expert butter-maker is in charge; the plant is run by steam; there is an electric light equipment for furnishing light to the plant and office.

"The cold storage capacity is 7,000 pounds. Mr. H. P. Bouge're, the proprietor, is highly gratified at the success he is meeting with. The Creamery is located 2 and a half miles from Covington, in the heart of the Ozone Belt."

In a posting on the "Remember Covington" Facebook page Tim O'Connor noted that his Great Grandfather Horace Bouge're built the diary farm north of Covington in the San Souci Forest. The dairy covered the entire area off of Lee Rd. Down Playmakers Road and stretched all the way to the Bogue Falaya River. The dairy barn was built around the year 1913.

"When I first came over to Covington in 1949," Judge Ellis recalled. " I had been looking for a piece  of property to buy, and one of the things I had looked at was a place in Sans Souci Forest. There was this old cow barn on there. But as it turned out I couldn't rustle up enough money to buy it."

"But when the Playmakers started looking for a theater, I got the idea that the cow barn could be fixed up to make it work. Alvin Bertel owned the property, and he was very enthusiastic about the idea. It was in terrible condition, cow manure everywhere, OLD cow manure, and stuff written on the walls about when the cows gave birth to calves, lots of the siding was gone."

"Anyway, I took Lester Landon and Jack Payne out there to look at it, and they both said, No,  we couldn't do anything with this. A few days later I get a call from Lester and he's telling me, we've been talking about the barn and maybe we could do something with it. So I talked to Alvin Bertel and he got excited about it and said 'Let's go!'

"He gave us money, he gave us wood,  he just really got behind the project," Ellis said. "And we would all go out on the weekends and have picnics and put it together. It took maybe a month, working nights, nailing up siding in the cold. But eventually it was ready," he concluded.

"The first play we put on out there was  "Kind Lady," written by a local resident who had moved to Covington with his wife. He had earlier had a play produced professionally so it was decided Playmakers would do the next one. 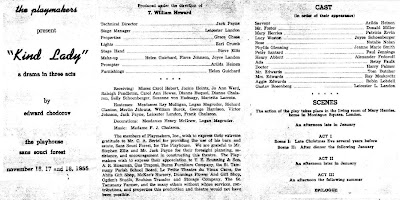 The "Kind Lady" Program
Click on the image to make it larger and more readable.

Although "Kind Lady" was kind of a downer play, according to Ellis, it was well-done  and well-received.  "And we just went from there. We kept making money and kept putting money back into the building. We heated it, put in a big space heater in the back of the auditorium."

"Young Gus Trapani was a very good  electrician, and he did a great job putting in the electrical system, especially as we kept adding things to it."

The first "spotlight" used in the Playmakers cow barn theater Judge Ellis recalls was a regular flood light with a cardboard tube held in front of it. "That's the kind of stuff we did," he said. "Eventually we built a lighting booth up in the attic facing the stage."

"I can just tell you that it was a lot of fun back in those days; everybody loved doing it," Ellis said. "And we all did everything. We all directed and acted. I built sets, I stage-managed. Everybody was into it, and we all got so much more out of it than we put into it."

Getting out to the barn involved driving on Lee Road out of Covington and then turning onto a long-winding, sometimes paved road back to the theater.  "Mr. Bertel had had some legal issues with the adjacent property owners about the access road, so a new road was put in and he helped pave the road.

Ellis left Playmakers around 1959 or 1960 when he was elected a judge, but returned for a "short spell" in the late 1960's playing a few parts in some plays and doing some set building.

One year he built sets for the first three plays and, understandably, got tired of doing it, so for the fourth play of the season he went out and laid out the flats and put all the lines down, and told someone else they had to do all the rest of the building. Well, they did so, and "he wound up getting the award for the best set that year," Ellis laughed.

"We got a lot of flats from a little theater in New Orleans, but we finally built a bunch of our own flats. They were lighter and easier to handle, he said.

For a more complete description of how Playmakers got started, Judge Ellis recommended checking with the St. Tammany Parish Library in Covington and asking to see a college master's thesis on the origins of Playmakers that was written on the occasion of the group's 25th anniversary in 1980-1981. Lots of people were interviewed for that research document, he recalls, and a lot of details were brought out and written down.