What part did St. Tammany play in the events that unfolded between British West Florida and the American Revolution in 1779? 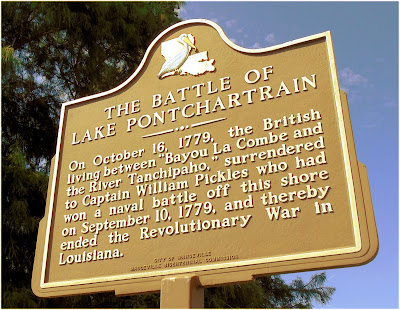 Here is a photo of the historical marker at Mandeville harbor commemorating the event.

In August of 1971 Judge S. F. Ellis of Covington gave a speech entitled "Seven Flags Over St. Tammany Parish" for the Historical Preservation Society. It dealt with the events that took place around St. Tammany during the period of time of the American Revolutionary War (1775 to 1783). Here are some of the more interesting historical facts:

"After the Revolutionary War began, James Willing of Philadelphia, representing the colonies, came down the Mississippi River in an attempt to have the English settlers there join in the Revolution. Although he was cordially received, he met with little success. He later returned, with a small force of men, and attacked and burned the plantations, and otherwise terrrorized the settlers along the river.

"Among his other feats, he captured a British sloop, the Rebecca, and brought it to New Orleans, where he was cordially  received by Bernardo de Galvez, the young Spanish governor.

"In 1779, Spain declared war on England, and Galvez captured the British forts at Manchac and Baton Rouge, the latter on September 21, 1779. In the meanwhile, the sloop Rebecca, re-named the Morris, was placed under the command of William Pickles, flying the colors of the United States.

"He entered Lake Pontchartrain and challenged the British sloop "West Florida," which, by virtue of being the only armed vessel in the lake, had dominated commerce thereon. Although outgunned and outnumbered, Pickles fired upon, boarded and captured the "West Florida." He then proceeded to the north shore of the lake, where he forced the British settlers to swear allegiance to the United States, and claimed the territory.

"This happened on the same day that Galvez captured Baton Rouge."

Judge Ellis had delivered this material because of its relevance to the upcoming Bicentennial Celebration in 1976. In fact, one of the events held during the Bicentennial Celebrations in St. Tammany was a re-enactment of that 1779 event where Captain Pickles came ashore at Mandeville lakefront and read the proclamation to the British settlers that they were now Americans.


A photo showing the boat landing at Mandeville during that re-enactment is below. 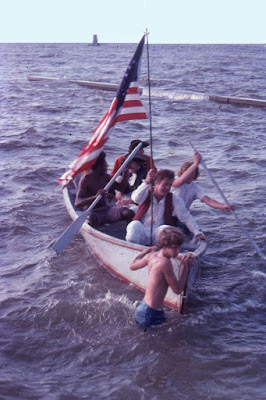 The 1779 encounter which took place near the mouth of Bayou St. John on the south shore, and Captain Pickles won the battle and took control of the lake. The ship was re-rigged and renamed Gálveztown. A few weeks later, he landed at Bayou Castine in Mandeville, gathered up the local residents and persuaded them to sign a “peace treaty” in favor of the American War of Independence.

Below is a picture of the "reading of the proclamation" during the 1976 re-enactment of the when the residents of the northshore surrendered to Captain Pickles. 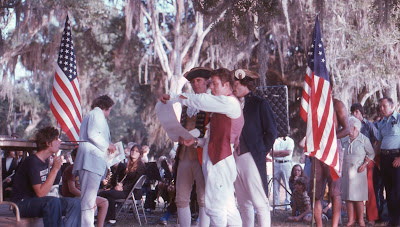 Re-enactors reading the 1779 peace treaty in 1976, John Healy in suit on the left, and Miss Ella Paine at the right.

The treaty was signed by 19 people. A copy of it was sent to Philadelphia where, according to historian Don Sharp, it was read before the Continental Congress and was a source of encouragement to that group and helped build their resolve to keep up the good fight for Independence. Here is a newspaper article written about the incident.

Captain Pickles then did something that greatly affected the future of Mandeville. He patrolled Lake Pontchartrain, protecting the northshore as best he could from the ravages of war. He put the word out to all the pirates, criminals and opportunists in New Orleans to leave St. Tammany alone. It was a time of war, so there were groups of bad people going across the countryside, taking advantage of the situation, burning houses, stealing cattle and anything else of value they could get their hands on, even murdering families.  They would use the cover of war to get away with doing things like that.

Capt. Pickles knew that many of those who lived on the northshore were American sympathizers, so he protected them. He let it be known that he vowed to catch and sink anyone trying to cross the lake to cause chaos on the north shore.

It was the kind of place that people just wanted to protect and preserve, people all the way from the earliest Native Americans to the most recent new residents.

According to an article in Wikipeda, following that successful expedition in south Louisiana, Pickles sailed on to Philadelphia, where the ship was sold.

"Pickles was then given command of Mercury, and charged with transporting Henry Laurens to the Dutch Republic on a diplomatic mission. The ship was captured off the coast of Newfoundland, and while Laurens were imprisoned in London, Pickles was imprisoned in Mill Prison in Plymouth. Pickles escaped from Mill on May 16, 1781, and eventually returned to Philadelphia."

According to Volume 13 of the Pennsylvania Colonial Records, he died in Philadelphia on September 9, 1783, after being assaulted by a gang of Italian sailors. The prosecution of his murderers was complicated by a legal question: whether statutes previously enacted by the British Parliament were still in force in the now independent state of Pennsylvania.Two of the sailors were sentenced on October 8, 1783, to hang ten days later.
Posted by Ron Barthet at 8:09 AM