Frederick Stephen Ellis wrote a comprehensive history book about St. Tammany Parish. His historical research touched upon the many different facets of the early pioneers who made it happen, why they made it happen, and how what happened led to the parish we have today. His book on "St. Tammany Parish: L'Autre Cote Du Lac" is quoted far and wide for its insights and facts, a reference volume that took many years to put together and publish. 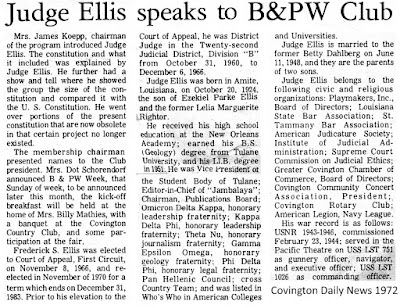 His background as told at a B&PW Club meeting

He was one of the organizers with the early St. Tammany Historical Society, serving as president in 1976, and a speaker at the group's annual Dinner Meeting in 1979. Many community groups have heard him present his historical highlights over the years, appreciating his love of history and his ability to record and share it. 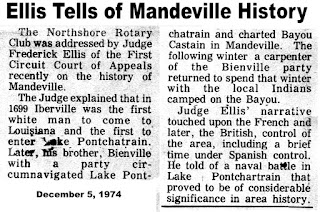 Below is a 1988 Times Picayune article about him and his work. Click on the images below to make them larger and more readable. 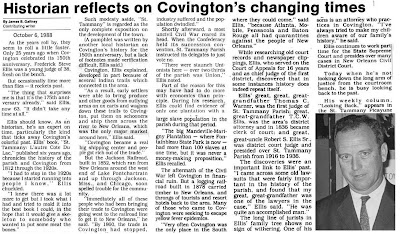 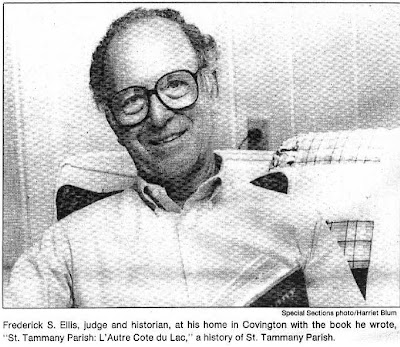 His history book, published in 1981, tells the parish's story between the early 1800s and 1920. “I stopped the book in 1920 because I started running into people that I know,” he told audiences. 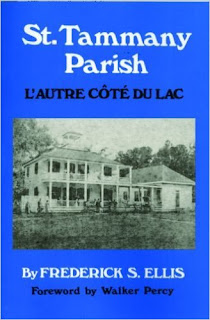 In a recent interview, Ellis told the story of how the book came to be.

"In the years leading up to the American Bicentennial, the police jury appointed a Bicentennial Commission to help organize the local celebrations. Frank Patecek was appointed chairman, and the effort was divided into three divisions: past, present and future," Ellis explained.

It wound up that Nichols and Healy were unable to continue with the project, so Ellis volunteered to finish the job. "I was at a meeting one night and I heard someone say 'I'll write it, I'll write it,' and it was me saying that," Ellis laughed. "I had no idea I was going to say that."

He had no idea of how much work it was going to be either. "Adrian Schwartz had said for years and years that he was going to write a history of the parish, so I had some of his early published histories, and going from there, I started doing more research. I started writing for information, I went to New Orleans, read some material from books, and came up with some interesting sources," he said.

Ellis had already done some groundwork when he wrote the article about the Revolutionary War's Battle on Lake Pontchartrain, so he picked up the trail on additional events and people.

"I came upon a lot of sources in Spain, France, Harvard and all over the place. I was really amazed how much interesting history St. Tammany had gone through. I just loved finding about all of that, new things, things no one had ever known before or written about."

Because of his background and reputation, he was allowed special access to many museum original materials. "They let me go into the "black box" room in the museum, the lady who was in charge just told me go in there and look around. I found so much good stuff just going through those boxes. It was good exercise for me. By the time 1976 came along, I had pretty much finished up the first part of the book. "

"I had about $1400 in funds I had to spend publishing the book, so I called LSU, told them who I was, and asked them to publish a history book that I was writing. Well, they just told me that, as a rule, they don't publish books they haven't read yet."

"I can understand that, I told them. Is there anyone you can suggest who might just do that? I asked." 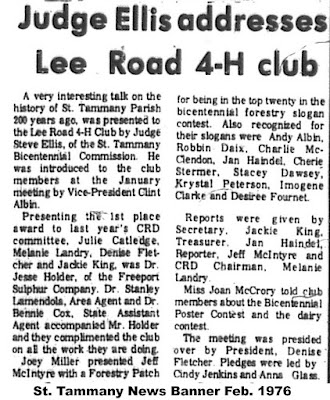 So a contract was signed, the $1400 down payment was paid on the publishing expenses, on December 31, 1976, the last possible day the Bicentennial Commission funds would have been available.

It took Ellis a couple more years to finish the book, but it was published in 1981 to rave reviews. "It covers a lot of subject matter, and it reads like it is complete, but it is not," he admitted. "You could make a separate book out of every chapter in that book."

Twenty five hundred copies were printed in the first edition, and he is still getting an occasional royalty check from sales. They still sell them at Barnes and Noble, he said, and there are copies available on Amazon. 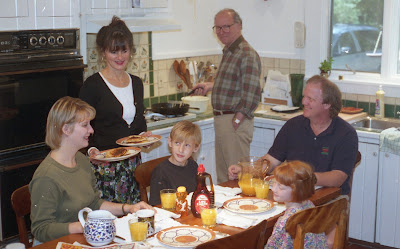 In 2015, he was awarded the President’s Award in Arts and Culture for his accomplishments as an attorney, judge, and community leader. Judge Ellis was friends with Walker Percy, the acclaimed novelist who also lived in Covington. Ellis' tribute to Percy may be read at the following link:
https://www.ibiblio.org/wpercy/remembrances/ellis.html

He told a meeting of Keep Covington Beautiful that “since its inception, Covington has been a beacon on the north shore. It was the first town, had the first schools, the first newspapers, the first hotels, and was the major center of communications for the entire area.”

“Even as a village, it offered intellectual and commercial opportunities not often seen in rural communities. Its natural situation, and its strategic location were the catalysts for this progressive attitude, but it has always been blessed with leaders of vision," he concluded.

In his all-encompassing book on the history of St. Tammany Parish, Ellis gave Florence "Winky" Chesnutt the credit for persuading him to become a historian in the first place. 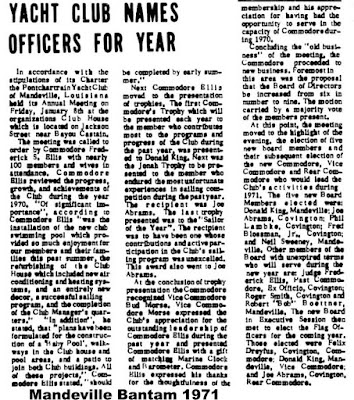 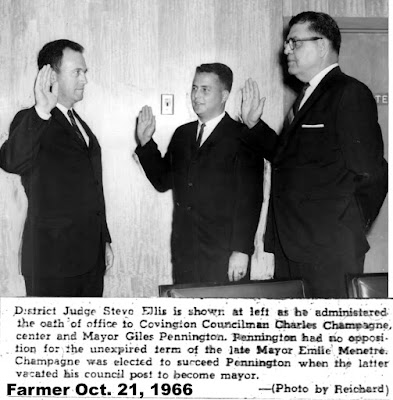