Governor John Bel Edwards and his wife stopped by the Treen Instructional Technology Center in Mandeville yesterday to visit with retired teachers from St. Tammany Parish. His talk to the St. Tammany Retired School Employees Association centered on state budgetary concerns as well as public education funding. More than 120 attended. Here are some pictures. Click on the images to make them larger. 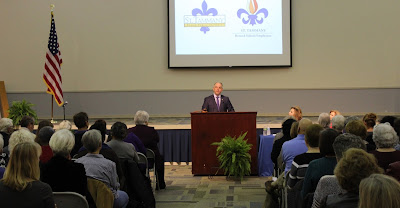 Governor Edwards addressed concerns about the state budget, and particularly the funding of public education and state employee pension plans. With more than 120 people in attendance, the Governor explained the challenges for the state over the next few years, the importance of public education, and the dedication and work of school system administrators and elected officials.

He noted that his success in life was due in a large part to the educators who taught him as a young person. Not only are teachers important in the lives of children, but custodians, lunchroom workers, and paraprofessionals are a key part of he team as well, he stated.  Making sure all those people are acknowledged and appreciated is important, he felt.

Balancing the state budget while protecting funding for public education is one of his main goals, he said. It has been a difficult year for Louisiana, he reminded the audience, with two major disasters affecting many thousands of residents. Choosing the priorities in cutting expenses and raising revenues is quite a challenge, and there is pain on all sides of that equation, the Governor went on to say.

STRSEA President Roxanne Lagarde noted that the meeting was the group's annual "legislative meeting" where issues of concern coming up in the next legislative session are explained and discussed. Usually the group invites several area state representatives and senators to join in a forum, but this year the Governor accepted the group's invitation to speak.

Several St. Tammany Parish School Board members were also in attendance.
Christine and Lexie Weber, students from Fontainebleau High School, sang the National Anthem at the beginning of the meeting. 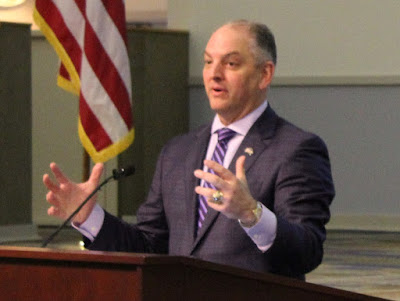 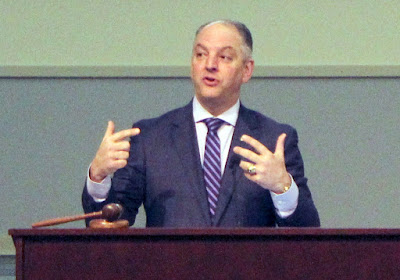 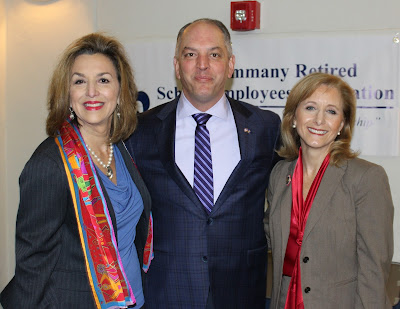 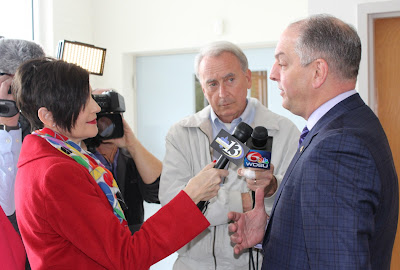