A 1909 map of Covington was found on the internet by Jack Terry, and it has some interesting features that throw light on early 20th century street alignments in the city. The map was drawn from surveys made by engineer K. H. Barrow.

Click on the images to make them larger. I have added additional color to help orient the viewer. 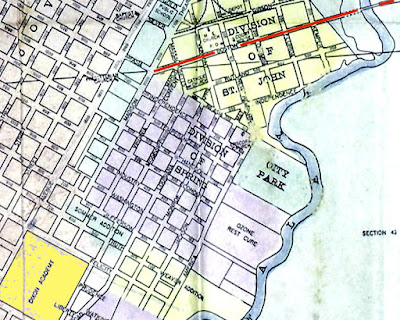 In the map section above we see Boston Street at the top right, coming across the river (red line). It cuts across the Division of St. John, and the pale purple area below that is the Division of Spring.
The "city park" opened in 1909 as Bogue Falaya Park and  is located on the map along the river half way down, and below that is Ozone Rest Cure, a famous health refuge on South America Street.
In the lower left corner in yellow is the "Dixon Academy," soon to become St. Paul's College and then St. Paul's High School.
Map Section 2 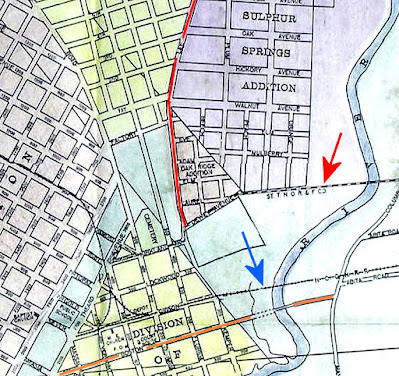 In this map section above, we see Lee Ferry Road (Lee Road) as a red line coming down from the top, and Boston Street (orange line) crossing the river and heading on an angle westward. Note the "Sulphur Springs Addition" at the top, which became a major subdivision and was known for the Sulphur Springs beach attraction as well as a Boy Scout camp.
Of particular interest are the TWO railroad lines coming into Covington from the east. The top railroad line (shown by the red arrow) crossed the river several blocks north of the current Boston Street bridge. It was used by the New Orleans Railways and Ferry Co. "motor car trolley" which carried passengers from a pier jutting out into Lake Pontchartrain where steamboats would dock and then wind its way through Mandeville, up to Abita Springs and then over to Covington. In Covington it would cross the river and enter the city just north of where Bogue Falaya Plaza shopping center was located, then go past the city cemetery and discharge passengers somewhere around the current city police station and Justice Center.
The other train track, shown with a blue arrow, is the one we know today as Tammany Trace. It parallels the Boston Street bridge and brought train traffic onto Gibson Street. It was operated by the New Orleans Great Northern Railroad (which had been organized in 1904).
The map section also shows Oakridge, a triangle shaped area of streets wedged between the Sulphur Springs addition and Lee Ferry Road. Here is a close up map of Oakridge that was filed in 1901. Lee Ferry Road is along the left edge. 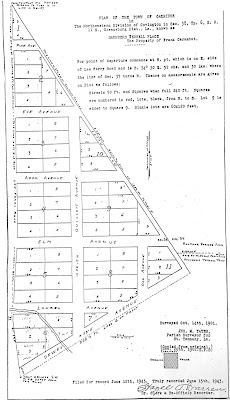 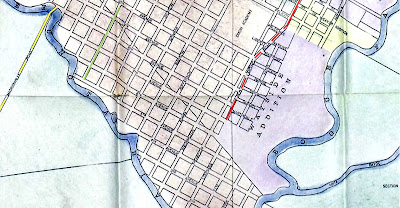 The last section of the 1909 Barrow map we will look at shows  the southern tip of Covington. I have been trying to find the original location of "Old Landing," the wharf where boats coming up the Bogue Falaya River would dock if they were too big to make it all the way up to Columbia Street Landing.

Early newspaper references (1879) are calling the area "Old Landing" so it was "old" even back then. Pat Clanton is helping me figure out where Old Landing was, but this map (and others) aren't much help because all it shows is "Old Landing Road" (the red line on the above map) just going down and sort of disappearing into the woods.
The other interesting thing about this map section is that it shows that the Madisonville Road at the top left crossed the Tchefuncte River on a bridge located between Filmore and Pierce Streets, some four blocks west of Tyler Street where the bridge is today. 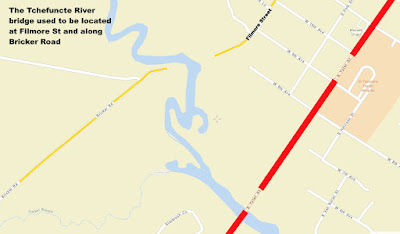 A present day map showing Tyler and Filmore/Bricker Street routes
An earlier Covington to Madisonville Road is marked on various land grant maps, showing a horse path starting at the southern end of Old Landing Road and crossing the Tchefuncte River before it merges with the Bogue Falaya. That horse path continues southward towards Madisonville. 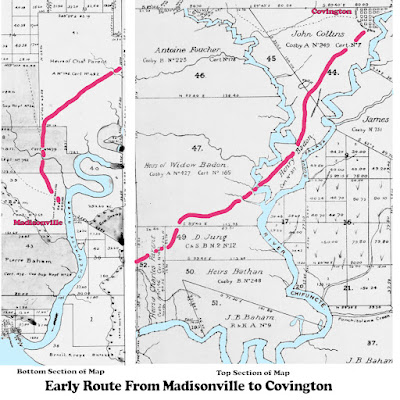 Thanks to Jack Terry for his continuing research in early Covington history.
See also: