Here is Part Two of the examination of the 1927 Sanborn Map Company of downtown Covington. The map shows the buildings, how the buildings were occupied, and additional notes of interest to insurance companies being asked to insure those structures. Part One of the series was in yesterday's Tammany Family blog.

Let's take a close up look at some of the sections of this map, and sort of "take a walk" around downtown Covington, as it was in 1927.

Here we go. Click on the map images to make them larger. Text in boldface and different color is a link to more information or a picture. A caption below the picture helps set the scene.

In the map section above, we'll start at the upper left corner, the intersection of Columbia and Gibson Streets, where we find a large blue building marked "Auto Storage" and with three filling station pumps at the corner. This is the current location of Dependable Glass.

Just south of that building is a two story brick structure (shown in red), and south of that are two wood frame buildings (shown in yellow). The large building closest to the alleyway would be Nichols Toy Store (now the St. Tammany Art Association.)

Across the alleyway is a vacant lot, and the next building, wood frame, is the H. J. Smiths Sons General Merchandise Store and Museum. Proceeding to the corner at Boston Street, we find a brick building filling station with three pumps, currently the location of Aubert Insurance.

Moving eastward along Boston, we come to the building at the corner of Florida and Boston, at that time an auto repair shop but currently the location of a rug and carpet store.

Crossing Florida and continuing along Boston there are several wood frame buildings (yellow), until we get to the corner of Lee Lane (then called Kemper St) where there is a brick building (red) that's a filling station with three pumps. Currently in that location is Blitch Knevel Architects.

Moving up Lee Lane, we pass Minden Place (now called Abadie Lane) and go to the Gibson Street intersection, where we turn left and head westward. The train tracks are in the middle of the street, with a siding curving downward to the brick building at the corner of Florida and Gibson, the Old Covington Ice House and now the Renaissance Antiques & Gifts. Back in 1927, that building was a warehouse and lumber shed, according to the map.

Half way down the block on Florida there is a lumber shed, the one used by H. J. Smith's General Merchandise. That structure is still there today, behind the Subway restaurant. 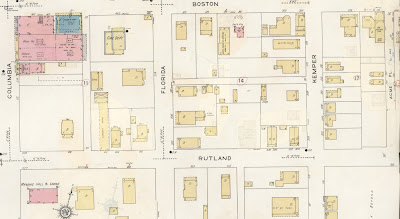 In this map section, we cover the east side of Columbia St below Boston, all the way over to the shops on Lee Lane. Starting at the left top, there are two large brick buildings. The corner building has two stories and a "feed and hay" storage area in the back (gray). The corner building was a bank for many years.

The second building is a warehouse and Hardware store, Smith Hardware, with the notes mentioning "oils" being stored there. The Sanborn maps were made for insurance company purposes, so anything that affected possible fire ratings was noted.

The smaller red brick building under that was a locksmith and bicycle repair shop, now occupied by the Olive Patch Baby Clothing Store.

Heading down Columbia, we cross Rutland and find the Masonic Hall & Lodge, a two story brick building that is still there. Moving eastward along Rutland, we pass the alleyway where there is another lumber shed and come to Florida Street. There is located a wood frame building with an elongated front porch, currently where the English Tea Room is located.

We head up Florida Street a full block and note that the Covington Fire Department is located on the southwest corner of the Boston/Florida Street intersection. That was a Shell service station for a long time, and is now home to an automotive detailing and window tinting business.

From there we head eastward on Boston Street, past the future location of the bus station and Oak Tree Service Station, although in 1927 there is a small brick building filling station with three pumps in the middle of the block, where Blossman Oil Co. used to be.

We continue eastward on Boston and come to Kemper St. (now Lee Lane). The Lee Lane we know today isn't there yet, but many of the wood frame structures that will become Lee Lane shops are already there.

A very interesting street at the far right on the map is Acme Place, which doesn't exist any longer. It comes off Boston Street behind current day Coffee Rani and NAPA Auto Parts building and heads towards the river, or Charropin Park at that time. This was before "ox lots" were partitioned off as public property. 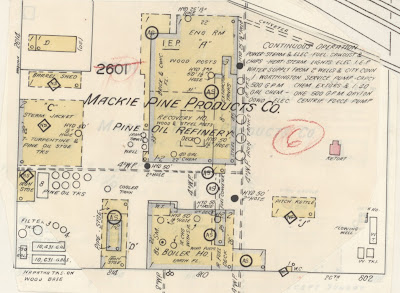 The Mackie Pine Products Company
The Mackie Pine Products Company occupied the block that the huge parking lot for the Justice Center now occupies. The Sanborn map notes on that complex of buildings stated "continuous operation" with steam and electric power, sawdust and chips, water supply from two wells. It even had its own fire fighting apparatus and huge water pumps. It was quite a manufacturing facility, with a pitch kettle, barrels of turpentine and pine oil storage tanks. The pine oil refinery burned down in 1935. 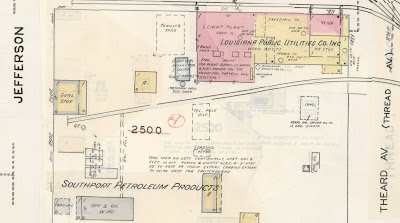 The block north of the Vergez Machine Shop, where the CLECO substation and The Market shops are now located, was occupied by Southport Petroleum Products on the southwest corner and by Louisiana Public Utilities Co. Inc. on the northeast corner (near the train tracks. )

Southport Petroleum Products had three storage tanks, an office and a warehouse. In the middle of the block was a telephone pole pile. Notes stated that two men were continually on duty at the facility, with a variety of fire fighting apparatus available.

Over at Louisiana Public Utilities, top right, there was an electricity generator, a freezing tank for cold storage, and ice manufacturing. That facility also had extensive fire fighting apparatus on hand, a 12,000 gallon reservoir and 750 foot deep artesian well. This was the place that supplied the City of Covington with its first water system and first electrical system. They also had an "ammonia condenser" and "ammonia tank." 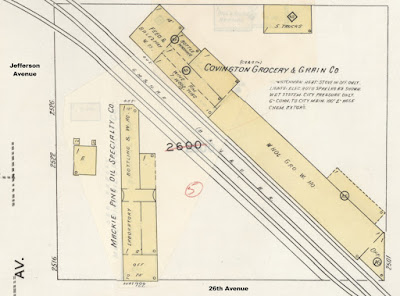 Moving northward one block, we come to the area now occupied by the southernmost parking lot of the Justice Center. It was through this parking lot that  the train tracks passed, right alongside the loading docks of the Covington Grocery & Grain Co. This business was a highly successful multi-state grocery wholesale distribution operation.

Bounded by 26th Avenue on the south and Jefferson Avenue on the west, this block featured the long grocery warehouse and distribution structure that also dealt in livestock feed and hay bales and wine bottling.

In the southwest corner of this block were the offices and laboratory (and bottling facility) for the Mackie Pine Oil Specialty Co. The main processing plant was located across the street as mentioned above. Among other uses, pine oil was sold as an antiseptic, a disinfectant, and a germicidal.

We come now to the end of Part Two of our tour of 1927. We will pick up tomorrow with Part Three.