The early years of official actions taken by the town council of the City of Covington have been compiled and digitized. While the record is incomplete due to missing documents or unreadable handwritten records, many of the ordinances and resolutions passed by the town council between 1817 and 1904 were examined and included.

The majority of the first recorded activities of the town council dealt with street repairs and improvements, drainage, town marshal activities, and hogs running in the streets.

This project represents Volume I of the town council minutes which covers the span of years from June 2, 1817 to June 20,1830, as well as documents recorded August 14, 1875, through June 7, 1904. Covington resident Jack Terry did the research and pulled the information together to provide better access to old town records. 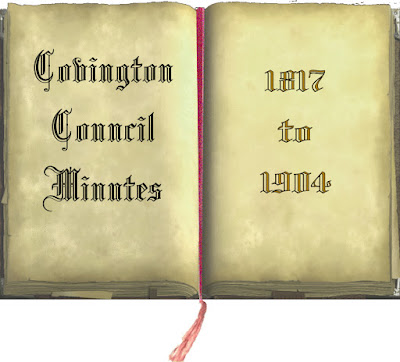 Here are some interesting excerpts from the town council minutes:

The name of the town was changed from Wharton to Covington by an Act of the state legislature on March 11, 1816. The same act spelled out the process of electing of five trustees to run the town, and the requirement that all male citizens between 16 and 50 donate up to six days a year working on maintaining the streets. If anyone refused to do so, they were fined.

On August 12, 1817, a law was passed to require citizens to keep all hogs under fence. All hogs running at large in the public streets would be seized by the city. The owner could pay a dollar fine and get their hog back.  This law was repealed, however, in June of 1819. It was re-instated in 1822 when the problem arose again.

Also in June of 1819, the town council took action to fine people who were trashing up the water springs from which citizens took their drinking water.

Another ordinance in 1819 required that all fireplace chimneys be built out of bricks and that "fire buckets" be kept readily available at all residences and businesses. Ditches were also mandated to be dug in front of all residences to help improve drainage and keep the streets dry.

In 1820 the town council cracked down on the discharging of guns within the town limits. There was a five dollar fine for violating that ordinance.

A law requiring a town license for the public exhibition of plays, shows, operas (or other theatrical performance or dramatic entertainment) was adopted in 1822. Another law that year taxed taverns and grocery stores.

In 1876 Thomas O. Sully Jr. was appointed marshal of Covington to replace a marshal who apparently had been collecting fines but not turning the money over to the city. Sully resigned the post a few months later. The next year, he was elected to the town council and chosen secretary pro tem.

In 1877, the minutes noted that a Mr. Neeld was editor of the St. Tammany Farmer newspaper and an offer had been made on the printing of all necessary city legal notices.

Bridges Built and Rebuilt After Floods

Also in 1877, bids were opened for the building of two bridges. Henry Jones won the bidding at $13. The lumber for the bridges was to cost $17.60. In July of that year, it was made unlawful "for any person to haul logs through the Division of St. John."

In March of 1878, the council discussed the need to repair the bridges that were damaged during the "last flood."