In 1927, the Sanborn Map Company made another one of its detailed downtown Covington maps for insurance purposes. This is the third and last blog post about those maps. The map showed the buildings, how the buildings were occupied, and additional notes of interest to insurance companies being asked to insure those structures.

Before we go to the maps, a word is needed about street name changes. There were many street name changes between 1927 and 2021, too many to list, but we will mention a few. The one block long street north of the School System Administration building on Jefferson Avenue is now named 24th Avenue, but in 1927 it was "Gold Street." The one block street south of the central school system office is now 23rd Avenue, but back then it was "Silver Street."

And the one block long street in front of Acquistapace Supermarket, which is today called "21st Avenue", was back in 1927 known as "Asia Street."

Let's take a close up look at some of the sections of this map. Click on the map images to make them larger. More information may be available when text is in boldface and a different color of type. Captions below each image help set the scene. 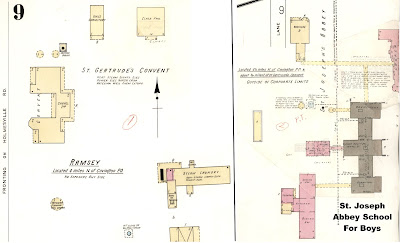 St. Gertrudes Convent & St. Joseph Abbey School for Boys
In the map section above, we have the buildings layout for St. Gertrudes Convent and the St. Joseph Abbey School for Boys, both located a couple of miles north of Covington in Ramsey. At the far left edge of the map is the notation on what is now "La. Hwy. 25" going to Folsom, but it was labelled as the Holmesville Road. That indicates that it went to Holmesville, Miss., an agricultural and political center of commerce in the early 1800's.
The map spells out the different uses for the different buildings, waterlines, building construction and other items for interest to insurance companies, the purpose of the map drawings. 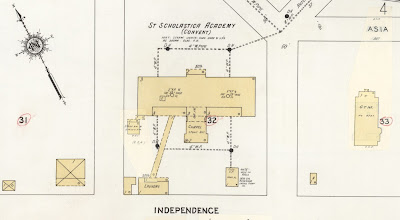 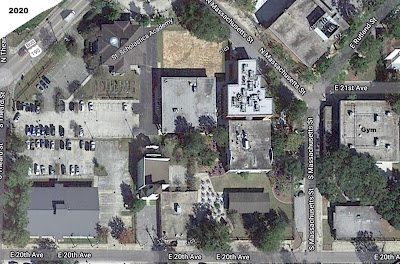 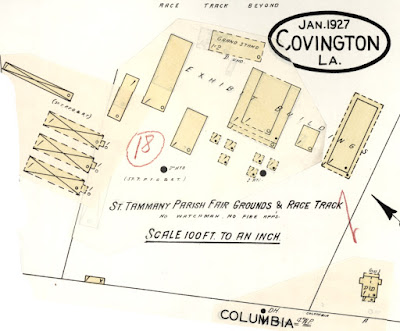 The Parish Fairgrounds on Columbia Street in 1927: Exhibit Buildings Layout 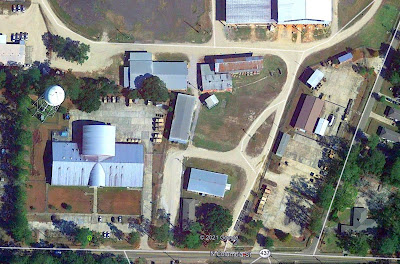 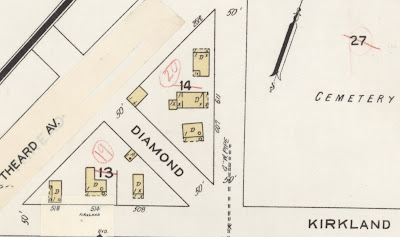 Here's an interesting map section showing the triangle of land where the police station is currently located (where Covington City Hall used to be). This is where the Farmer's Market is now held on Saturdays, across from the big city cemetery. Well, back in 1927, there was a street called "Diamond Street" that cut through the middle of the triangle on its way from Kirkland to Theard Streets. 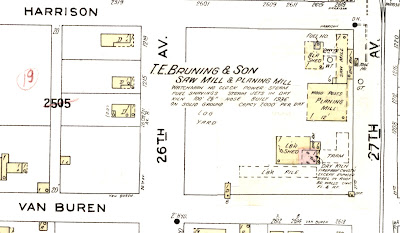 T.E. Bruning & Son Saw Mill
According to the 1927 map, there was a saw mill and planing mill adjacent to the railroad track on 27th Avenue, between Harrison and Van Buren Street. The above map is re-oriented with west at the top and North to the right. This is currently the location of the eastern portion of the St. Tammany Parish Government Tyler Street complex, across the street from Mele Printing. 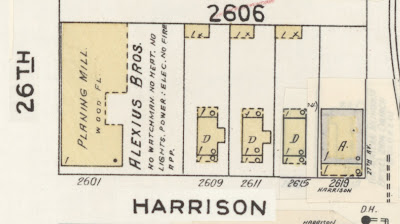 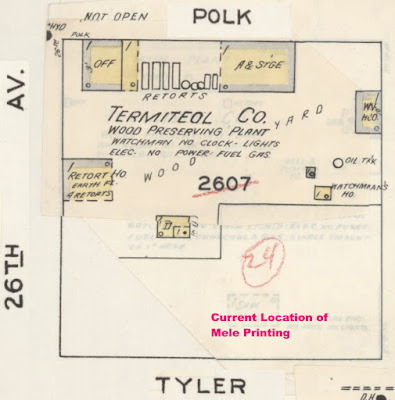 On the northeast corner of Polk Street and 26th Avenue in 1927 was the Termiteol Co., a wood preserving plant. Map view has west at the top and north at the right side. 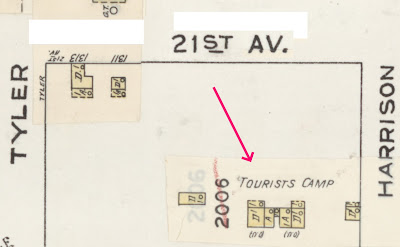 In the block southeast of the Tyler St. and 21st Avenue intersection, now occupied by a CVS Pharmacy (and formerly by Badeaux's Drive In), there was in 1927 a Tourist Camp. 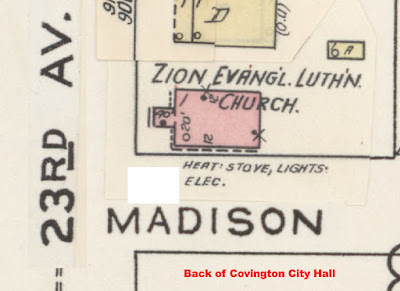 The new brick building (shown in red) was labelled in 1927 as Zion Evangelical Lutheran Church at the northwest corner of Madison Street and 23rd Avenue. That structure, now without a steeple, has since had numerous uses, churches mainly, but at one time the home of Rosemerry Furhmann Hanian's Creative Dance Center Danceplayers studio. 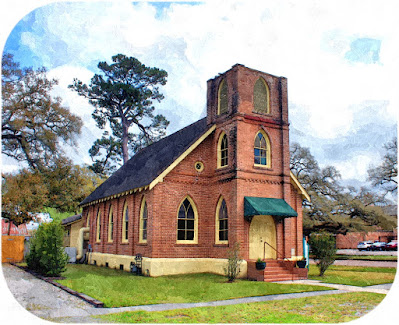 The Zion Evangelical Lutheran Church and its cornerstone 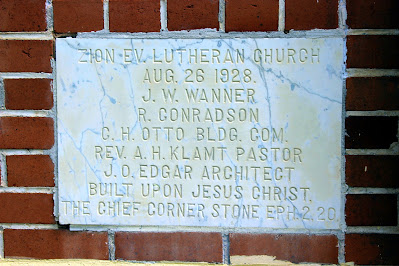 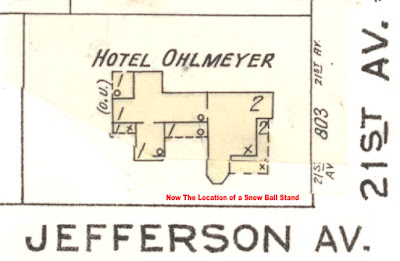 Also in 1927, over at the southwest corner of Jefferson Avenue at 21st Street, now the home of a snow ball stand, once stood the Hotel Ohlmeyer.
An important part of every Sanborn map was a paragraph or two about the town's general characteristics and water supply/fire fighting capabilities. Here are the details of Covington as described in 1927.
Description of the Water Supply 1927 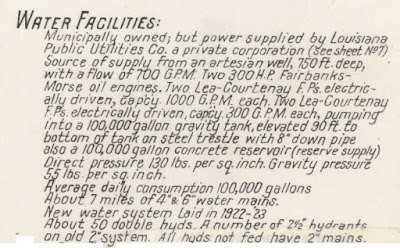 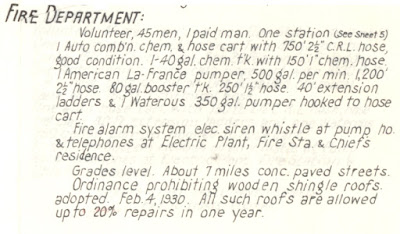 Text of above:
Fire Department: Volunteer, 45 men. One paid man. One station. One auto combined chemical and hose cart with 750 ft of two and a half C.R. L. Hose, 1 American LaFrance pumper, 500 gallon per minute. Twelve hundred feet of two and a half diameter hose, 80 gallon booster t'k, 250 feet of one and a half inch hose. 40 foot extension ladders and  1 waterous 350 gallon pumper hooked to hose cart.
Fire alarm system: electric siren whistle at pump house and telephones at Electric Plant, Fire Station and Chief's residence.
Grades level: about 7 miles of concrete paved streets.
Ordinance prohibiting wooden shingle roofs adopted Feb. 4, 1930. All such roofs are allowed up to 20 percent repairs in one year.
Would you like this three-part Sanborn map article in a PDF file? CLICK HERE to download.