On November 24, 1846, the New Orleans Picayune newspaper contained this news item about the town of Madisonville... 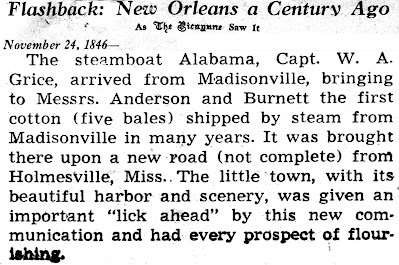 The mention of the new road being built from Holmesville, Mississippi, is important, since it opened up a large section of southwest Mississippi to trade. The town is located between Tylertown and McComb, and at one time was a hub of commerce. The distance to Covington was 65 miles. Holmesville was a thriving community in the 1850's, and home to several notable politicians. 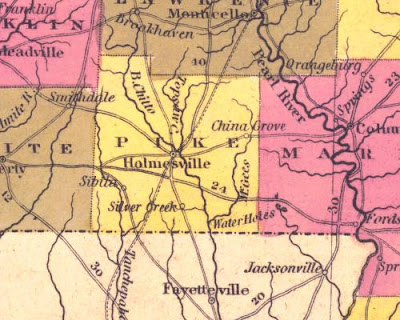 Roads radiated out from Holmesville in all directions

In a SLU term paper on the history of Folsom written by Gary B. Jenkins, it was noted that, "The vast area north of Covington, to the Mississippi state line, was one of virgin forests, practically untouched by the effects of civilization. The only road of any kind that penetrated the area was the Holmesville Road."

"It was the most important and by far the best maintained road in this area. It was, however, a dirt road. The road ran from Covington, LA to Holmesville, Mississippi," Thomas wrote. Apparently in 1846 it was being extended to Madisonville to take advantage of the shipping port on the Tchefuncte River.

In the first half of the 1800’s, as the population grew, so did the traffic on the Holmesville Road. Cattle were driven to the Madisonville Boat yards to be sold in New Orleans, even herds of turkey’s were driven to market.

"While the farmers would camp along the road the turkeys would roost in trees along the road Holmesville was located on the west bank of the Bogue Chitto River about 15 miles north of the state line. It was the first county seat of Pike County, and its greatest period of prosperity was between 1830 and the Civil War. At that time it was a popular resort for folks from New Orleans.

The Railroad Passes It By

"The construction of the New Orleans, Jackson, and Great Northern Railroad bypassed the town and brought about the decline of Holmesville. The county seat was moved to Magnolia on the railroad in 1875."

The road between Holmesville and Madisonville thus became an important supply route for the city of New Orleans.  Not only that, but when Holmesville became a great resort, the road from Madisonville through the summer months was often crowded with people seeking rest and relief from the unhealthful atmosphere of New Orleans. Its healthfulness, picturesque scenery, pure water, facilities for outdoor sports and quiet pleasures, made it a desirable place for a summer vacation, as did Mandeville, Abita Springs and Covington. 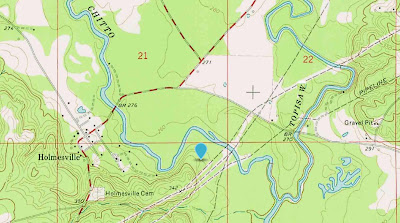 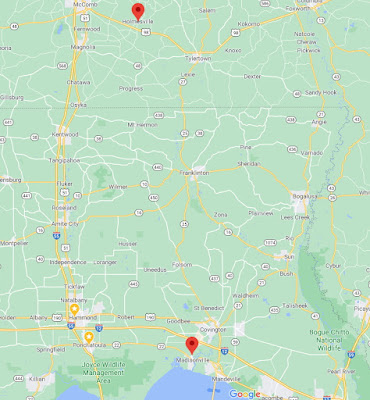 Jack Terry has done extensive research into the original landowners in Covington, and he notes that several of the names he has come across as early purchasers match the names of people known to live in the Holmesville area around the same time.

Holmesville and the history of Pike County seems to offer several direct connections to Covington and Madisonville, in addition to the trade coming down the Holmesville road from throughout south Mississippi.