This stirring account of a community-minded Talisheek resident was published in a 1976 issue of the St. Tammany News Banner. It is the inspiring story of Hattie Keen Parker, her love of flowers, her church work, and her caring for the sick and needy in her community.

Hattie Keen Parker was born in Slidell, Louisiana, on July 9, 1869, the daughter of the late W. N. Keen and Eleanor Jay Keen. The latter's mother was from England and belonged to the Aristocracy.

Hattie Keen married Walter Parker of Taliheek, Louisiana, on May 11, 1896. Her husband for many years was identified with the lumber business and was one of the largest landowners In St. Tammany Parish. Three children were born of this union, two daughters, Mrs. E. J. Frederick, Jr and Mrs. T. 0. Creel, and a son, A. D. "Bo" Parker.

Her two daughters, with their husbands, resided for a time in the old family home on West 19th Avenue. Covington, Louisiana.

Hattie Keen Parker, or "Aunt Hattie" as she was called by many of her friends, was not only a devoted and loving wife and mother, but always found time for other worthwhile activities In the community.

She was very active in her Church, worked conscientiously for the Red Cross during World War I, was involved in many different projects connected with the St. Tammany Parish Fair, assisted in all outside school activities, was always interested in young people and worked with and for them, and last, but not least, Mrs Parker always found time to help the ill and the needy.

Hattie Parker, since her early childhood, was an active  member of the Methodist Church. She organized the Sunday School at Talisheek and was Superintendent of the Sunday School there for years. She was President of the Ladles' Aid Society, and organizer of the Wednesday night prayer meeting group while residing to Talisheek.

After moving to Covington in 1919, she continued her active work to the Methodist Church here. She taught a Sunday School Class of young people every Sunday and worked with the Ladles' Aid Society.

Until her death, the was a member of the Stewards of the Methodist Church.

The Methodist Church on Gibson Street was completely destroyed by fire In the early 1920's. Mrs Parker was most influential a few years later in starting a drive for funds to build a new church, which church was built on Jefferson Avenue.

She was also instrumental in having a new parsonage built on 22nd Avenue. Although a great portion of the cost of these two buildings was financed by her husband, Hattie Parker worked hard with other members of the Church to raise funds and liquidate the balance of the cost. These funds were raised by having cake sales, chicken dinners, Ice-cream parties, etc. Donations were also solicited.

This Sanctuary served Its congregation for fifty years. These two buildings were  demolished about nine years ago (1967) to make room for the construction of the beautiful present Sanctuary.

Mrs. Parker loved people and is best remembered for the charity work that she did so unselfishly. She always seemed to search for the needy in the community to help them in any way that she could. She gave financial assistance, served and made clothes for them, gave food and provided medicine too when needed, defraying even doctors' bills when their services were needed.

This kind of unselfish love for others was continued throughout her life.

The sick were never neglected if Mrs. Parker knew about them. She visited them, always taking something with her to show her love and concern for them. Her gift to them might only be a bouquet of flowers from her garden, a cake for the family, or a tray of sandwiches, but there was always something. On many occasions she was known to spend day after day with the sick helping to nurse them back to health.

Hattie Parker brought joy and happiness to all who knew her and her wonderful "sense of humor" showed others the brighter side of life.

Mrs. Parker enjoyed young people and entertained them when time permitted The family's lovely country home In Talisheek or their large houseboat on the Tchefuncta  River was the scene of many fun filled parties. Sometimes there were as many as twenty or more high school or college students invited to attend these outings. She was always ready to chaperon parties for the young people such as dances, boat. rides, watermelon parties, beach parties, swimming parties, etc.

She loved her flower garden which was always one of beauty. She worked with her pot plants and flowers diligently. How Hattie Parker enjoyed sharing them with others! Whenever plants and flowers were needed for special occasions such as bridal showers.. weddings, high school and grammar school graduations or what have you, everyone in the community knew Mrs. Parker would give them as many as they needed.

Many wonderful things were said of this remarkable woman during her lifetime, a truly wonderful woman so full of love for mankind. Her daily guide for living can best be described as one who helped someone in some way everyday of her life. This was truly exemplified to the life that she lived.

Hattie Keen Parker died on January 6, 1941, leaving a great heritage not only for family, but for the entire community as well. 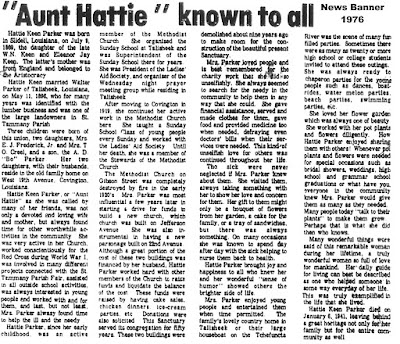