Here are excerpts from an article from a 1931 issue of Louisiana Conservation Review magazine that explained more about naval stores and their importance to shipbuilding and other widespread uses.

In the article entitled "Louisiana's Naval Stores Industry" by V. II. Sonderegger, it noted that the state  in the past had been depending upon the naval stores crop from its virgin pine timber, obtaining the gum from three species, namely: longleaf, slash and Sonderegger pines, the first two producing the larger amount.

To gather the raw material "turpentine trees have cups hung on them and streaks are hacked in the form of a "V". These streaks go through the live tissues under the bark and act as a wound. Oleoresin, or gum, as it is known, exudes to heal the wound. Each week a fresh streak or wound is made above the old one. The cups, when filled with oleoresin or gum, are then emptied and hauled to the still. 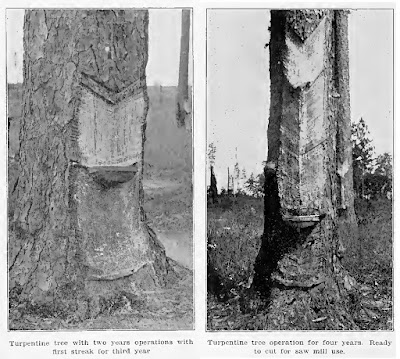 "The general impression of the layman is usually that the oleoresin or gum is the sap from the pine tree and that it drains its vitality. This,  however, is not true, as oleoresin is a sticky substance exuded by the small ducts lying under the bark and go to work when the tree is streaked."

The article goes on to explain, however, that whenever the tissue is cut into, the irritation is felt by these ducts which exude the oleoresin to heal the wound and prevent the sap from flowing. Turpentine operations, therefore, do not use the sap, but use the oleoresin from the ducts, which is a healing compound that the tree uses in attempting to heal its wounds.

"Consequently, the first two years of turpentining are non­productive of a large crop as the constant irritation through streaking causes these ducts to become more active and the production increases with each year's streaking."

While in 1930 the turpentine industry is still in its infancy from a chemical engineer­ing standpoint, progress was being made to improve the process.  Oleoresin was shipped to the still and put in a large kettle with water and boiled. "The turpentine and water escape in the form of steam and is condensed. The water is drawn off and the turpentine is stored. The residue in the still is known as rosin, and this is poured into a pit and strained, then emptied into barrels where it hardens," it was explained.

"Rosin takes various grades from water white clear to a dark amber color, and the sales of rosin are affected by the color. The clearer the color the higher the price.

"In the process of distilling oleoresin for turpentine arid rosins, a great many of the chemicals are liberated and not collected. However, research in chemical engineering will contain these escaped by-products which the pinene or pine oil group contains."

In addition to using live and young trees, the naval stores were also produced from the distillation of old stumps, pine knots, and old tree tops. This Material was chipped, cooked, and distilled, and the products were not only turpentine and rosin, but also a multitude of various pine oils.

"Turpentine has long been a valuable commodity in the life of mankind. A great portion of turpentine, as with all nations, is used in paints, varnishes, various polishes for leather, automobile oils and greases, chemical supplies, and a combination of a hundred and one other uses, the article noted.

Covington was famous for its production of Mackie Pine Oil products, and a large stump processing facility was located in the downtown area.

The article also mentioned that "the products of the dis­tillation plants produce pine oils under various names and grades that have a large multitude of uses, among them can be recorded disinfectants, insecticides, smelter flotations, paints, varnishes, and in working up various wood commodities. Pine oils are also used in the manufacture of rayons."

"The more familiar commodities, of which all of us are acquainted, are lotions, the old pine tar cough syrup, shampoos, and many of the polishes for shoes and metals. As an antiseptic for the human being, pine oil is to be recommended, and has a large use. Its antiseptic qualities include a noncaustic and nonpoisonous reaction, and it does not destroy the tissues of the human body," and these attributes led to the use of pine oil disinfectants, pine oil cleaning fluids, and a variety of other pine oil based products.

The article then explained that the future of this particular branch of the naval stores industries is the distillation of pine oils from stumps and heart-wood. At that time it was in its infancy, and promised that chemical engineers or students who  are entering this course of work had a good future.

There were many unknown pine oil products, it was felt, and research was looking into the development and manufacture of not only the oils, but also the cellulose.

In 1931, only three species of pitch pines were used for naval stores. The two shortleaf pines; pinus echinata and pinus taeda, did not contain enough turpentine to make them pay. During 1930, the naval stores' output from the pine trees of the entire state of Louisiana consisted of 806,075 gallons of turpentine at $282,126.25, and 69,092 barrels of rosin, the barrel being based on 280 pounds weight at $380,000. 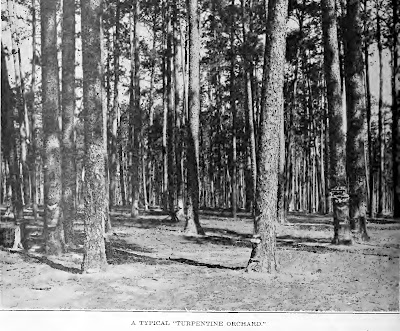 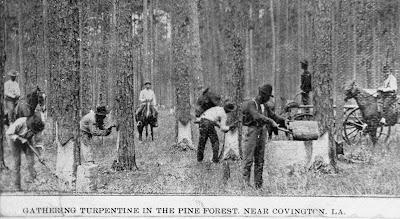