On May 12, 1971, an article in a local newspaper told the story of Covington's own archaeological dig. Here's the article, as well as the photograph that accompanied it.

St. Tammany Parish, long known to be rich in Indian lore has again given up traces of her treasure. Members of the St. Tammany archaeological group have been aware of the existence of an Indian burial ground within the city limits of Covington for about a year and suspected it for a much longer time.

Recently the owners of the property, Mr. and Mrs. Hezzie Mclntrye, told the archaeological group that the old mound would have to be removed.

The group, headed by Mrs. Paula Johnson, emphasized that they do not advocate wholesale digging and now do so only as a last resort to save as much of the history of the mound as they can manage. An attempt was made to get an expert to do the digging but time and lack of funds makes that impossible.

The group has spent the last few weekends digging tunnels into the mound at Fourth and Adam streets and carefully documenting their finds. To date traces of fossilized bone, arrowheads, poverty point blades, various bits of stone and tools, bits of charcoal raising the possibility of cremations, and the most exciting find of all, pottery shards which can be dated back to the Marksville period have been found at the site.

Mrs. Johnson took her findings to Tulane University where they were identified as being from the Marksville period that dates from A.D. 100 to A.D. 500.

An earlier examination of the mound in June of last year confirmed the belief of the group that this was indeed an Indian burial mound. Robert Neuman, an archaeologist, made that evaluation.

It is possible that the finding of a poverty point blade could mean that the mound is from an even earlier era. Further examination will be required to definitely establish this as fact.

Frank Young, a member of the group and chief digger, has lived in the area for many years and collected many artifacts over a period of years. His family at one time owned the site of the mound, and he told Mrs. Johnson about the mound. Miss Tessy Polk of Covington, a teacher of Folsom, became interested in the mound and tried to interest the community in it.

Mr. and Mrs. McIntyre acquired the land about a year ago and became aware of the significance of the mound when workmen building their home found several arrowheads in and around the mound.

The Marksville period mound is defined as being the type of mound found in Avoyelles Parish, having mounds within and outside of an encircling ditch and ridge. Marksville pottery types are present and the whole complex is closely allied to Hopewellian manifestations.

Known sites are found throughout the alluvial valley. Surface collections, however, suggest a sparse distribution up the Red River and as far west as the Sabine where excavations revealed Marksville traces.

There is only one earthworks site, the Marksville type site. All other representations are recognized from pottery distribution. Marksville mounds have not been found in this immediate area till now.

In digging in the mound the group is looking for tell-tale characteristics of that period such as non-ceramic projectile points, stone ornaments, effigies, bone fish hooks, awls, shell beads, copper ornaments, basketry and matting in addition to the characteristic pottery of the period.

Mrs. Johnson hopes to preserve as much of the history of the surrounding area as possible. One of her fond hopes is the creation 'of an Indian museum in downtown Covington. 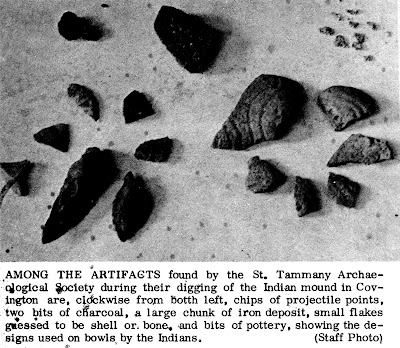 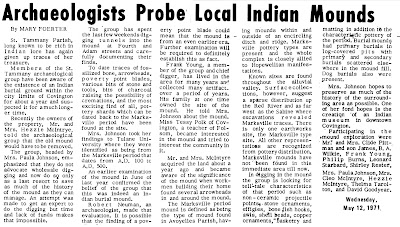 The above newspaper clipping was found in the papers of the late Mrs. Bertha Neff, who at one time was archivist for the St. Tammany Parish Clerk of Court's Office.

In the St. Tammany Farmer, an article about the dig published at the time noted that the site at Fourth and Adams streets was slated for construction of a swimming pool when it came to the attention of the state archeological society. Hezzie McIntyre was identified as the landowner. Pieces of pottery were discovered that were some 2000 years old. Arrowheads and blades were also found, some thought to be more than 3000 years old.