In 1927, the Sanborn Map Company made another one of its detailed downtown Covington maps for insurance purposes. The map showed the buildings, how the buildings were occupied, and additional notes of interest to insurance companies being asked to insure those structures.

Let's take a close up look at some of the sections of this map, and sort of "take a walk" around downtown Covington, as it was in 1927. Since there are so many points of interest to see, this is Part One of the map tour. The next part will be published on the Tammany Family blog tomorrow.

Here we go. Click on the map images to make them larger. Text in boldface and different color is a link to more information or a picture. A caption below the picture helps set the scene. 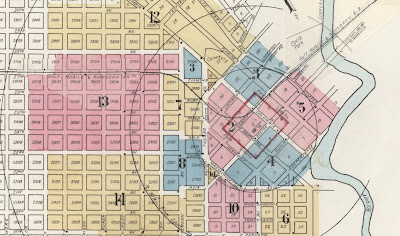 This is the index map which gives you an overall view of the area to be covered. 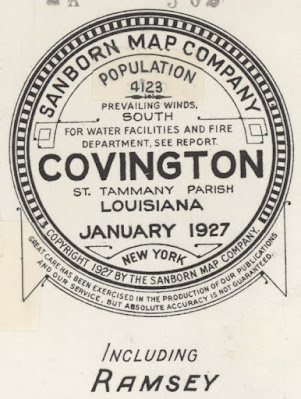 The Sanborn Map Company maps are treasured today because they show actual building shapes and construction notes, from town to town, from year to year. 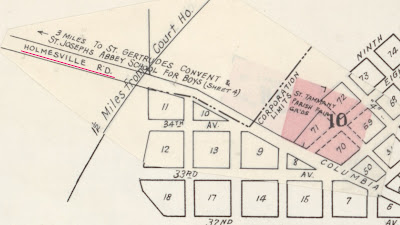 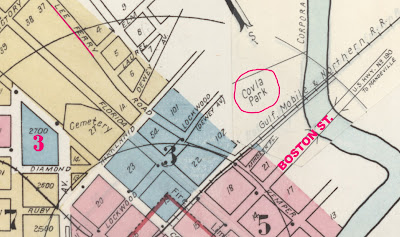 At the location where Boston Street crosses the Bogue Falaya River, we see that Lee Lane was called "Kemper St" at that point in time, and Abadie Lane was called "Minden Place." The big red "3" at the left is where the Justice Center is today. Near the railroad bridge is "Covla Park," where Gilsbar is located today. And, of course, the cemetery is in the same location as today, corner Columbia and Kirkland Streets.

The main attraction on Boston Street was the Southern Hotel with steam heat and electric lights, plus a water system with 60 lbs. of pressure, according to the notes. In the left wing of the Southern Hotel was a restaurant, in the center was the lobby, and on the right wing ground floor front corner was a bank.

The parish courthouse was accompanied by a "fireproof vault," and the jail was in the rear corner of the courthouse lot. Behind the Southern Hotel and across the alley was a newspaper printing office, the St. Tammany Farmer. Across the street from there, at the top of the row of buildings was a restaurant (across the alley from the Star Theater location).

In the lower right corner is the Boston St./Columbia St. intersection, where there is a dry cleaners. Going up Columbia St. , we come to a photo shop, then a restaurant, and at the top we see a drug store (Bulloch/City Drugs) and a building with a Bake Oven. 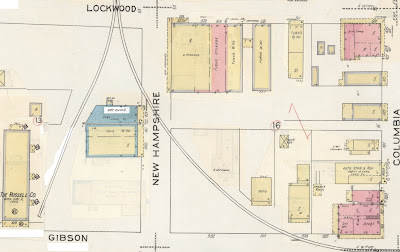 In this map section, we see in the lower left a building marked as "The Russell Co., Wholesale Grocery and Feed," which is occupied today by the Marsolan Feed & Seed Company. The building next to the Covington Trailhead parking lot has a dry cleaning establishment located within, and the two train tracks are merging together heading for the train depot.

On the right side of the map at the top, we see "G. Pyrenes" where Burns Furniture Store was located, (now a vacant lot), with a warehouse area in back set aside for "furniture storage."

Down in the lower right, we see the train track coming along Gibson and turning northward, passing by the two story brick building (formerly Maison Nez) but at that time was a drug store with a doctor's office in the back. Next to that, moving up Columbia, was an auto repair shop, with room for 15 cars. 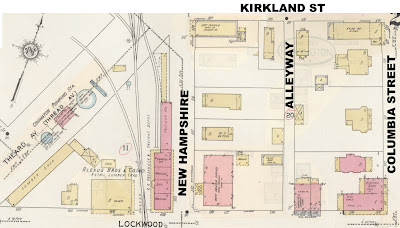 In the map section above, we see the train depot in the lower middle, with the Alexius Brothers Hardware and Lumber company buildings at the lower left. It also offers "paints." To the left is a long lumber shed along Theard Street, close to where the old Firehouse Events Center is located today. The Alexius Brothers Building is now home to Once In A While Gifts and Coffee Shop.

The Covington Pumping Station is highlighted on the left of the map, with the notes saying there is a "100,000 gallon gravity tank on steel tower, 80 feet to bottom of tank."  The pumping house electrical information is given, and a 125,000 gallon reservoir is also noted.

To the right of New Hampshire Street, at the top middle, is another dry cleaning place, where the Beck N Call cafe is located today. At the other end of the block is a bakery with brick oven, and down Columbia to Lockwood, there is an electric shop. In the middle of the block near the alley on Lockwood is an upholstery shop and cabinet shop. 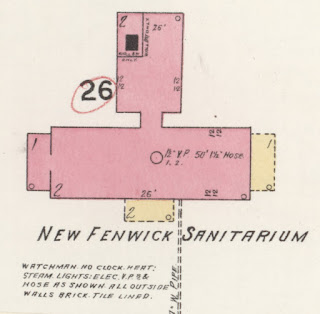 A close up of the New Fenwick Sanitarium which, as the notes say, has a night watchman, steam heat, electric lights, and exterior bricks and interior tiles. 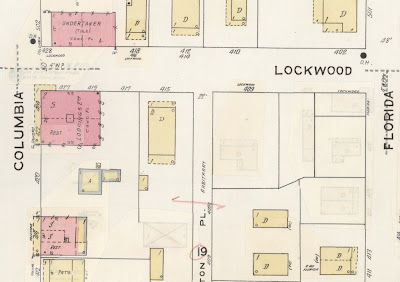 This map shows the intersection at Columbia and Lockwood, at the top left is the undertaker (Schoen & Molloy) occupying the building that later became Suella's Dress Shop, then Roberts School of Beauty, and (today) Armbruster's School of Art.

Across the street southward is a two story brick hotel, with a restaurant on the ground floor. Currently that building is occupied by the Columbia St. Tap Room and Grill with professional offices upstairs. There was another restaurant further down Columbia St.

This map shows the area north of Gibson Street between Lee Lane and Columbia Street. The only identified items are the restaurant across the street from the Dependable Glass side door, and the lumber yard in the northeast corner of the Florida St./Gibson Street intersection (where the condominiums are now.) 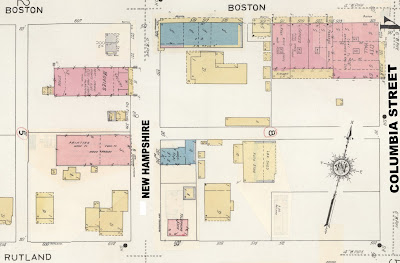 We end Part One with a look at the blocks south of Boston Street between Columbia St. and New Hampshire Street, which is now known as the "Citizens Bank" and "Heritage Bank" block.

On the left side is the movie show, the Majestic Theater, which offered steam heat, electric lights, and a stage. Below that is Kentzel's Printing. Across the street, down at the corner of Rutland, is the Telephone Exchange building, now an attorney's office. 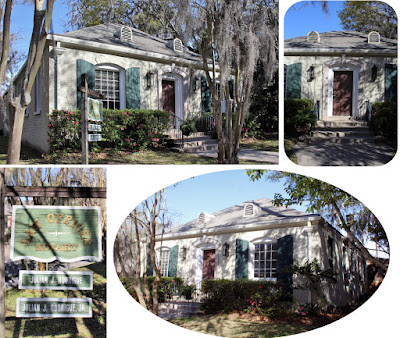 At the top right is the corner of Columbia and Boston, where we see Covington City Hall in the second building down Columbia. There is a restaurant mid-block on Boston, and an lumber shed in the middle of the block.

Tomorrow we will look at more interesting notes and drawings from the 1927 Sanborn map.