The Covington Cemetery No. 1 has been a maintenance challenge over the years, and it was in pretty bad shape in the late 1980's, that is until a group of community preservationists got involved. Here's the story.

The History of Covington Cemetery No. 1 was published in 1988 by the St. Tammany West Chamber of Commerce Auxiliary. Entitled "The Legends of Covington Cemetery No. 1: Covington, LA, 175th Anniversary 1813-1988" the 166-page book contains volumes of information about the cemetery and who is buried within. Click on the image below for several paragraphs from the beginning of the book: 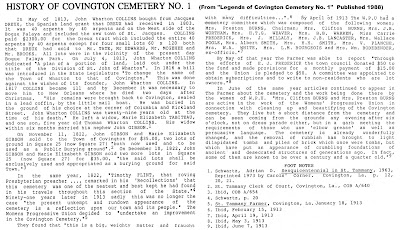 HISTORY OF COVINGTON CEMETERY NO. 1
(From "Legends of Covington Cemetery No. 1" Published 1988)

In May of 1813, John Wharton Collins bought from Jacques Dreux, the Spanish land grant that DREUX had received in 1803. It was 40 arpents by 40 arpents and on the West side of the Bogue Falaya and included the new town of St. Jacques.

Collins paid $2300.00 for the Dreux tract which included the entire 40 arpents by 40 arpents except for four small lots 60 x 120 both that Dreux had sold to Mr. Tate, Mr Edwards, Mr. McGehee and Mr. Brooks. All lots were in the vicinity of the present day
Bogue Falaya Park.

In 1817 Collins became ill and by December it was necessary to move him to New Orleans where he died two days after Christmas.    "His remains were brought back to Covington, sealed in a lead coffin, by the little mail boat.

"He was buried in the ground of his choice at the corner of Columbia and Kirkland Street. John Wharton Collins was twenty-nine years old at the time of his death." He left a widow, Marie Elizabeth Tabiteau,and one son, five year old Thomas Wharton Collins .

His widow within six months married his nephew John GIBSON.1

On December 10, 1822, John Gibson and Marie Elizabeth Gibson sold two more lots in Square 25 (now Square 27) for $35.00, "the said Lots shall be exclusively used and appropriated as a burying ground for said Town."3

In the same year, 1822, "Timothy Flint, that roving Presbyterian preacher ..., remarked in his 'Recollections' that this cemetery was one of the neatest and best kept he had found in his travels throughout this section of the State."4

Ninety-one years later in 1913 sadly this was no longer the case "the present unkempt and rundown appearance of the cemetery is a reflection upon our town and its people." The Womens Progressive Union decided to "undertake an improvement in the Covington Cemetery."5

By May of that year The Farmer was able to report "Through the efforts of E. J. Frederick the town council donated $50 to the fund and made provisions for a monthly payment of $15.00 and the Union is pledged to $50. A committee was appointed to obtain subscriptions and to write to non-residents who are lot owners."8

In June of the same year articles continued to appear in The Farmer about the cemetery and the work being done there by the women of W.P.U. "Mrs. Clifton BURNS and Mrs. Preston BURNS are active in the work of the Womens' Progressive Union in connection with cleaning up and beautifying of the Covington cemetery.

"They live but a short distance from the cemetery and can be seen coming from the grounds any evening after six o'clock, not on dress parade either, but in a garb meeting the requirements of those who use 'elbow grease' as well as persuasive language. The cemetery is already wonderfully changed, and the removal of rubbish has brought to light dilapidated tombs and piles of brick which once were tombs, but which have put an appearance of crumbling foundations of ancient and desecrated structures of generations ago. In fact, some of them are known to be over a century and a quarter old."9 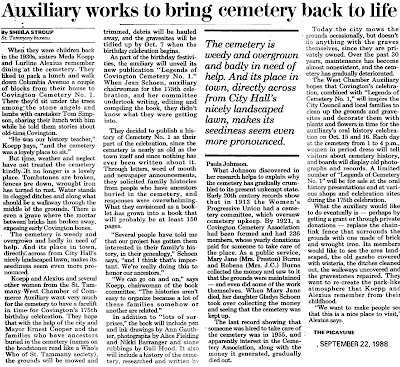 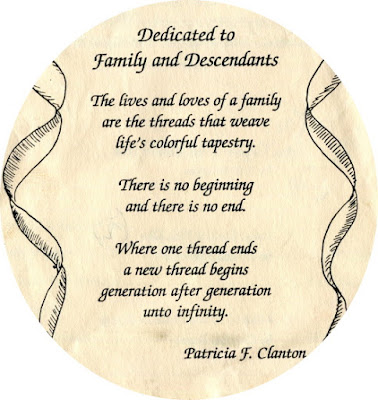