In 1922 the Sanborn Map Company made a detailed map of Abita Springs buildings. The map showed the buildings, how the buildings were occupied, and additional notes of interest to insurance companies being asked to insure those structures.

Let's take a close up look at some of the sections of this map, and sort of "take a walk" around the Abita Springs  of 99 years ago, as it was in 1922. Click on the images to make them larger. A caption below each map image explains where it is in relation to today's landmarks.The red labels indicate what is located there now, to help orient the viewer to the location. 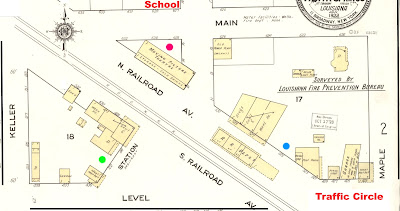 The first map section shows the center of town. At the upper right is Maple Street, through which the road to Covington enters the town. The school grounds are at the very top, and the red dot shows the current location of the two-story pavilion. In 1922, that was the location of the moving picture theater, which also provided cold storage. Across the short side street was the former location of the town power plant. Across Railroad Avenue from the picture show was the block where the Abita Brew Pub is now located (green dot.) In the center of the map is the railroad depot, parallel to the train tracks, and above the depot are three businesses in one building, a drug store, a warehouse, and a general store. At present that location is occupied by Rosie's Tavern and Artigue's Market. The current day Jr. Food Mart location (blue dot) was the site of a pool room and barber shop, with a chicken house in back. At the northern edge of the traffic circle, intersection of Maple and Level, (bottom right corner) was a press shop, a garage and a meat market. 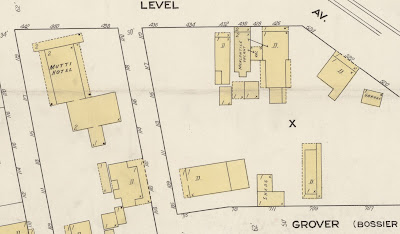 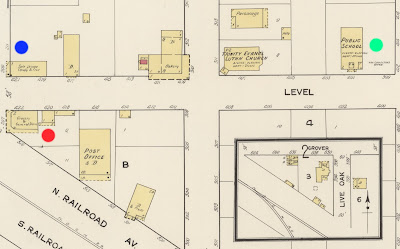 In this map section, we are looking at the blocks just east of the traffic circle. The red dot shows the location of the former ABC Grocery, now a small gazebo, but in 1922 was a grocery and general store. In the middle of the block was the post office ( now a snow ball stand). At the top of the map, at the blue dot, is the current day Citizen's Bank and Trust. Back then it was a place that sold soft drinks, candy and fruit. At the other end of that block was a bakery. Across the street from the bakery was the Trinity Lutheran Evangelical Church, with the parsonage next door, and at the other end of that block was the public school, now the location (green dot) of the Abita Springs Town Hall. In the inset map at the bottom right, is the current location of the Abita Mystery House UCM Museum (corner Grover and Railroad Avenue). 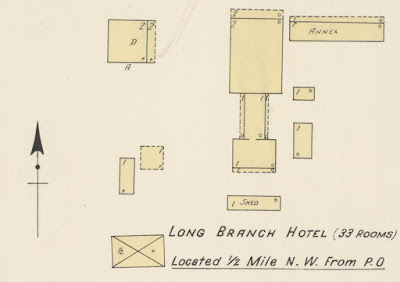 This map shows the building layout for the Long Branch Hotel 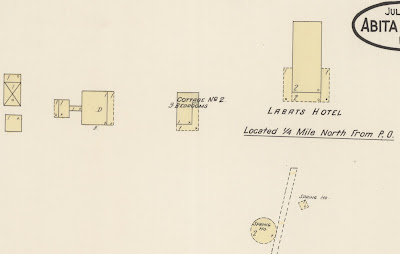 This map shows the building layout for Labats Hotel 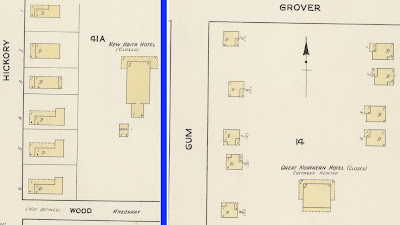 These two map sections show the location of the New Abita Hotel and the Great Northern Hotel.

This map image from 1922 shows the area of the Abita "Spring House" and public pavilion with stage offering a "small amount of scenery." There are elevated walkways between the pavilion and the springs house.