In 1887 Abita Springs was gaining a considerable national reputation for its health restoring capabilities, both for its healing waters and pine-scented ozone air. Although a couple of hotels had already been built, area residents and community leaders knew because of that reputation, more hotels would have to be built, railroad accommodations had to be provided, and communications had to be improved.

Proposals were sought to try to arrange for all the necessary big hotels to be built, along with other attractions, and one particular proposal came to be held in high regard in March of 1887.

In May of 1887, Ed Bossier, Ed Breckenridge, Poitevent & Favre purchased the springs for $12,000.  The first excursion train arrived at Abita Springs on Sunday, June 26, 1887, and that fostered an even greater need for hotel accommodations. Things really started coming together as a result.

Here is the newspaper article explaining what could be done:

ABITA SPRINGS -A few days since we made mention of the improvements that Messrs. Poitevent & Favre in one direction, and Messrs. Henry & Fayssoux in another, proposed to make at Abita Springs.

Since then we have been put in possession of information which enables us to be more detailed and explicit in statement.

Messrs. Henry & Fayssoux have received offers for the purchase of Abita Springs, but have refused them. As they acquired the property for the two-fold purpose of securing an attractive and comfortable summer resort for their families, and to erect suitable accommodations for the many who seek the benefit of the waters, and as they had promised to associate others with them in this latter work of improvement, they did not of feel at liberty to entertain the propositions made.

Improvements To Be Accomplished

They now have under consideration the means by which the improvements contemplated can best be accomplished. This much may be considered as decided upon.

The Springs will be transferred to and managed by a joint stock company, in which Messrs. Henry & Fayssoux will retain a large interest. The company will operate under an existing charter by which it holds valuable rights of way for railroad concessions, wharf privileges at Mandeville, etc.

The shares of stock will be placed at moderate value, and paid in small installments. The land adjacent to the Springs, and not required for the ornamentation or use of the large hotel to be erected, will be laid off in suitable building lots and sold under certain conditions.

The facilities of speedy and comfortable communication between New Orleans and the Spring was the first question considered. It has been ascertained that by the construction of a railroad from Mandeville over the line already surveyed (eight and a half miles) a fast boat on the Lake, making close connection with the West End trains, the distance between Abita and the center of the city can be traversed in a little over two hours.

This will enable our business men to enjoy a residence at the Springs, without the slightest neglect of their affairs. Visitors who prefer the lake bathing to the mineral baths at the Springs can go to Mandeville by the railroad in twenty minutes.

The improvements which have been agreed upon as necessary to insure comfort and enjoyment are as follows:

A spacious, well lighted and ventilated hotel, supplied with all the modern appliances, a number of cottages suitable for families, a complete system of water supply and facilities for mineral and other baths, ornamental ground, and good walks and drives, a library, livery stable, billiard rooms, bowling alleys, archery, tennis lawn, skating rink, row boats, etc.

Telegraphic communication will be established with New Orleans and telephone lines laid to Covington and Mandeville.

With a good cuisine, good water, good appetite, good pure air, good music and good fellowship, one would be difficult to please if Abita was not satisfactory.

Messrs. Henry & Fayssoux do not deem it necessary to advertise this enterprise, for the present at least. They say that the merits of the Abita waters are sufficiently known here and elsewhere to insure the attendance of as many visitors as can be comfortably accommodated at the outset.

In the North, where kidney troubles are so prevalent, much interest is being manifested in Abita by those affected, as the waters are regarded as an efficient remedy. When the accommodations are ready, a number of these sufferers can be expected at once.

There is every reason to believe that a large number of Northerners who now spend the winter months in Florida will resort to Abita. In addition to the same advantages of climate and comfort, the latter presents the additional attractions of salt and mineral water bathing, and convenient access to the city. 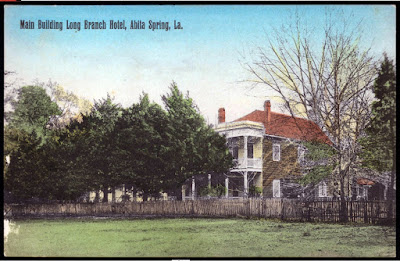 The Long Branch was built in June of 1880
Assurances have been received of liberal local patronage. The fact that Abita will be tributary to New Orleans for supplies, etc., will induce our merchants to give it liberal support.

Messrs. Henry & Fayssoux, while desirous of expediting the work of improvement, are proceeding carefully and cautiously. Appreciating to the full the merits and value of the Springs, they desire to omit nothing that will in any way add to or embelish the already many existing attractions.

At the proper time a prospectus will be published.

To the gentlemen who have undertaken this enterprise we extend our hearty good wishes for success. For years past we have been apprised of the wonderful curative properties of the Abita waters, and hence advocated the establishment of a sanitarium and pleasure resort combined, when that question has at different times been mooted.

We are glad to know now that it has assumed definite and tangible shape, and that we are to have an easily accessible, high, healthy and attractive resort, where we can take refuge from the enervating effects of our summer beat.

Considered alone as the means of adding to the number of our business customers, and of retaining to our city and State much of the capital which is annually now being carried away to build up other places, Abita Springs should receive a most liberal support from our people. 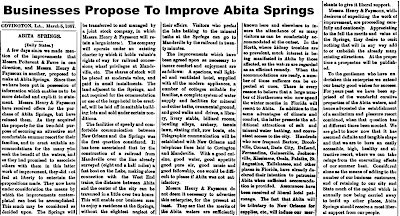 Pavilion Built Soon Afterwards
In July of 1887 a grand pavilion was completed near the train depot and excursion trains of nine passenger cars brought up to 450 passengers to the town. Simon's Hotel was opened on August 14, 1887.
According to a news item from 1888 edition of the Farmer: "Messrs. Poitevent and Favre have just built a commodious pavilion over the Springs, so constructed as to be beyond the reach of high water.
Mr. Thos. McAvoy has put up within a short time a handsome Queen Anne Cottage and Mr. Simons has completed two very neat houses, one a dwelling and the other a restaurant. A new store has also gone up, and a blacksmith shop has been added to the enterprise of the village. The hotel accommodations of Abita are sufficient for the entertainment of some 500 guests..."
"Abita promises, in the early future, to become one of the most prominent summer and winter resorts in the South. The health-giving qualities of the springs are well known, and the absence of yellow fever or other epidemic diseases makes Abita especially attractive to away from town people." 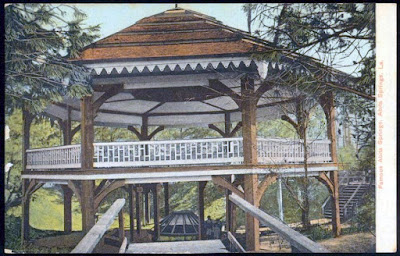