According to documents in the National Register of Historic Places, the earliest settlement in St. Tammany was in the area between today's Interstate 12 and Lake Pontchartrain. For many years the French dominated this area. They arrived in the 1720s and their influence continued well into the nineteenth century. For example, Creole planter Bernard de Marigny subdivided his North Shore plantation in 1835 to create the town of Mandeville.

"Given this early settlement pattern, one would expect lower St. Tammany to contain a fair number of French Creole dwellings and buildings reflecting other pre-Civil War architectural influences. However, the parish experienced substantial growth during the late nineteenth and early twentieth centuries due to the area's popularity as a health resort and the lumber and shipbuilding industries," the document states. 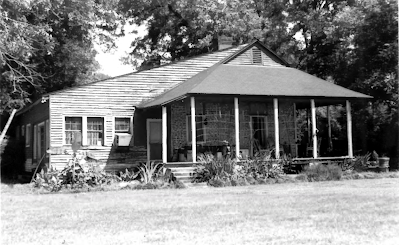 "For this reason, the vast majority of the parish's buildings date from this later period. A recently completed survey of lower St. Tammany found that of approximately 1,400 buildings which are 50 years old or older, only 24 are of pre-Civil War vintage.

"Among the perhaps 30 pre-Civil War buildings in the entire parish, less than six are in the French Creole style. With its abundance of character-defining features, the François Cousin House in Lacombe is a rare survivor to convey the look of early St. Tammany. Cousin settled in the area in the late 1700s and became one of its largest landowners."

François Cousin was born in 1745 in New Orleans. After reaching adulthood, he entered his father's lumber and brick making business. The source of the lumber and the clay to make the brick was across Lake Pontchartrain in what is now St. Tammany Parish.

Schooners transported the finished materials back across the waterway to New Orleans, where the company's office was located on Carondelet Walk and St. Claude. The company owned six schooners, one of which was seized by the British in 1779 as retaliation for Spain's refusal to let the British ship enter Bayou St. John.

Cousin also engaged in shipbuilding and the trading of naval stores such as tar. The exact date upon which Cousin settled in St. Tammany Parish is uncertain; documents suggest it occurred some time between 1778 and 1789. He owned property on Bayou Lacombe as well as on Bayou Liberty. In the 1811-1812 tax roll he was listed as the largest taxpayer, and he was apparently the largest land owner as well. Cousin died in October 1819.

In 2002 The François Cousin House in Lacombe was nominated for placement on the National Register of Historic Places.

According to the application, the François Cousin house is a French Creole residence reflecting two major periods of construction. An early house of unknown date was enlarged around 1820. Originally the house was in a completely rural setting on Bayou Lacombe. Subsequently the small community of the same name grew up around it. 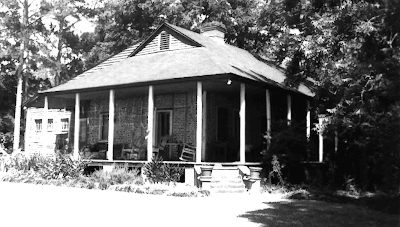 "Today the house occupies roughly a three acre parcel with the bayou at the far rear," the application goes on to say. "Numerous quite old live oaks and other trees provide a lush, verdant setting. Despite numerous changes over the years, some notable, the Cousin house has a strong French Creole character." 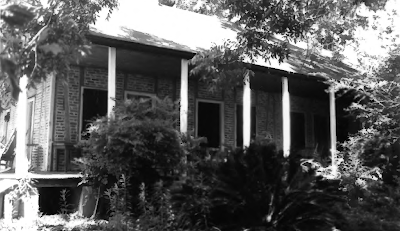 The Cousin house has a complex history of construction. While upon first glance the house may appear to have been built all at one time, certain constructional clues indicate otherwise. Because virtually all of the house's stylistic details date from the period of the addition (c.1820) and because constructional clues are not as precise, it is impossible to date the original two rooms.

For the purposes of the nomination, the date of the enlarged house (c.1820) was used. 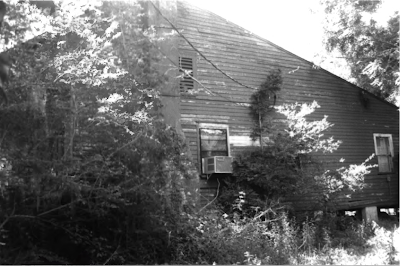 "Because of the Cousin house's early date, it is strongly French Creole in character. French Creole features include the hall-less floorplan, the Norman truss roof, briquette entre poteaux construction with French angle braces, two mantelpieces that wrap around the great central chimney, openings for French doors, and some surviving exposed beaded ceiling beams," the application stated.

The facade fenestration pattern of French door openings and windows is also typically French Creole in that it makes no attempt at regularity or symmetry. 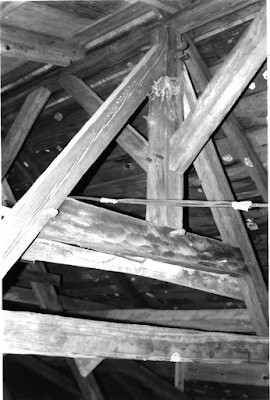 The Cousin house has received various alterations through its long life. In 1820 a gallery existed across the front, and the new work included the addition of a side gallery which created a gablet roof. Steps were added to create a corner entrance to the new enlarged gallery. 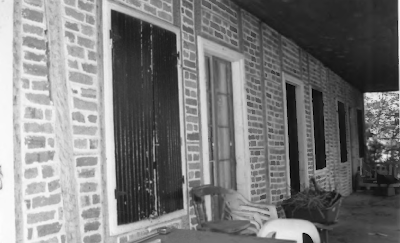 The present gallery posts are twentieth century.  In the early twentieth century a large addition was made to the rear under an extended shed roof.  Ax marks on the framing members indicate that originally the walls were plastered over both inside and out.

One wraparound mantel survives unscathed, while its identical companion has been partially dismantled, but all the pieces are in the room.

In spite of the alterations and enlargements, much remains of its early French Creole character - features that define the French Creole look such as briquette entre poteaux construction with French angle braces, the irregular facade fenestration pattern, most of the floorplan (without halls), the overly built Norman truss roof (something that survives in only the earliest of houses in Louisiana), exposed beaded beam ceilings, and its central chimney with mantels that wrap around the flue. 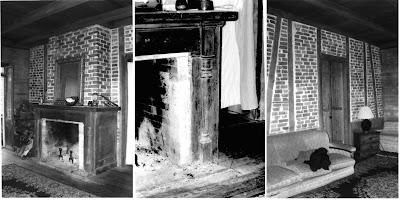 This makes the François Cousin House of considerable local architectural significance and is a rare survivor to represent St. Tammany's earliest architecture (French Creole). In fact, it is one of only a very small number of buildings in the parish dating from before the Civil War.

The François Cousin House in Lacombe was granted placement on the National Register of Historic Places on September 14, 2002.

It wasn't the only François Cousin House in St. Tammany Parish to be on the National Register, however. There is also one of the same name over on Gwin Road in Slidell that was granted National Register status in January of 2001.

The Slidell area house was built in 1790.

The François Cousin House in Slidell is a one-and-one-half story, frame, French Creole cottage which received a large rear addition during the late nineteenth century. It stands in a rural setting on the west bank of Liberty Bayou in what is now a suburb of the St. Tammany Parish town of Slidell. This area is part of a region known locally as the North Shore. Despite various alterations, the home remains eligible for the National Register.

The core's early date is based upon architectural and documentary evidence originally gathered in 1976 by Vaughn L. Glasgow, then Chief Curator of the Louisiana State Museum in New Orleans. The historic documents indicated a settlement date of between 1778 and 1789 for the property.

And, according to Mr. Glasgow, the type of nails used in the construction date from before about 1790. Based upon the foregoing, as well as his stylistic analysis, he indicated a date of 1787-88. For the record, the Division of Historic Preservation has not seen the nails in question; however, there is nothing the staff observed that would contradict such a date. Since an exact date is not known, circa 1790 was used for the purposes of the Historic Register nomination.

The Slidell home is comprised of two masses. The original Creole block (which stands closer to the bayou) is characterized by a gable end roof whose ridge parallels the nearby waterway. The late nineteenth century mass is connected to the rear of the older building.

It stands beneath its own gable end roof whose ridge runs perpendicular to the older core. Because it is wider than the Creole portion, the addition connects to side galleries (also added as part of the expansion) which flank the original building and connect to the front gallery at its corners.

Other features of interest found within the three room cottage include a very plain cornice in the large rear room, original wood floors, four pane transoms above all exterior doors, plank shutters (of which all but three are original), and historic wrought iron ram's horn hinges.

Although the home has eight sets of French doors and two sets of casement windows, the architectural evidence indicates they are not original.

Modifications to the three room cottage were also made when the home was rehabilitated by the current owners in the mid-1970s. Despite its many alterations, the home retains its architectural significance because many of the features which identify it as an early structure survive.

These include the briquette entre poteaux walls, the chamfered front gallery columns, the central chimney for wraparound mantels, the exposed beaded ceiling beams, the hall-less floorplan with two front rooms and a central chimney, and the wrought iron ram's horn hinges.

Photos of the François Cousin House in the Slidell area 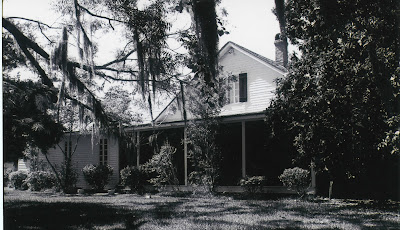 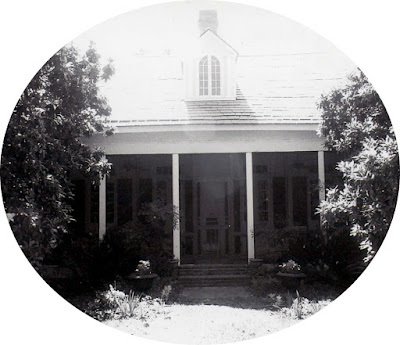 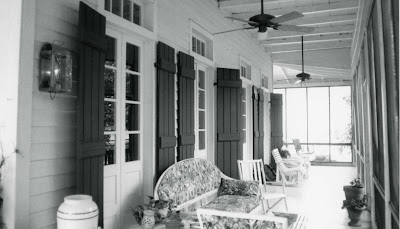 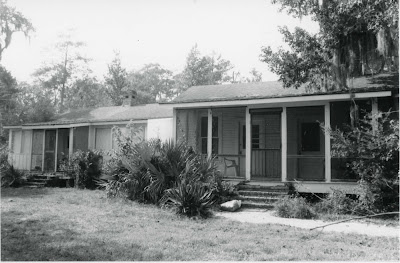 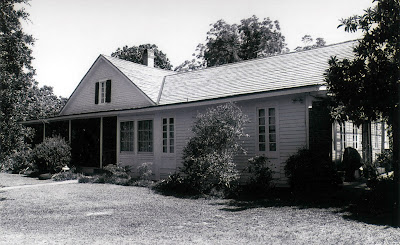 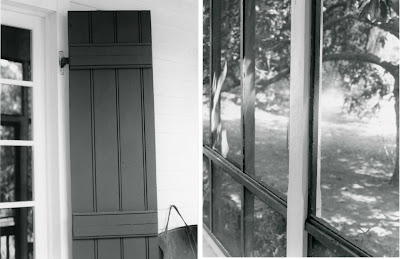 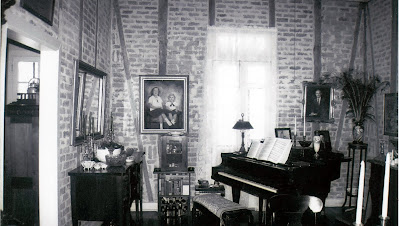 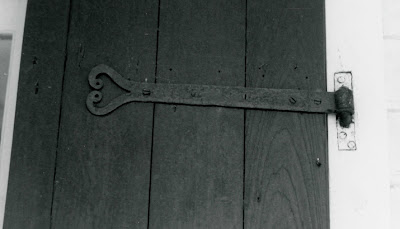 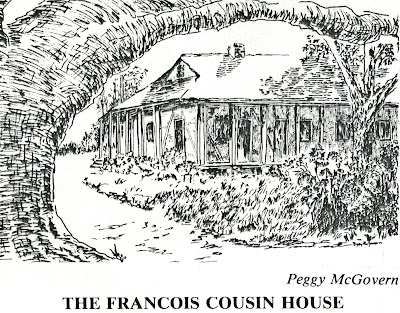