Don't get excited now, but on June 12, 1886 ( some one hundred and thirty-four years ago), the following item appeared in the pages of the St. Tammany Farmer.

Click on the images to make them larger and more readable.
Two weeks later, this news item appeared.
Gold Maybe - Maybe Not

Here is the text from the above two articles:
Gold Discovered in Mandeville
June 12, 1886

On Saturday, May 29th, while Mr. Joseph Vial was driving a well at Mr. P. Bague's place on Lake Street, Mandeville, he brought up some sand, at a depth of seventy feet, which was filled with fine particles of a bright yellow substance which glittered brightly in the sun.

He brought a small quantity of it to Covington, where it was examined by a jeweler and pronounced to be pure gold dust.

It will be sent to the Assayer of Mint at New Orleans, and if it proves to be gold, mining operations will be commenced at once. The vein containing this shining substance is 20 feet in thickness and from 70 to 90 feet below the surface.

In reference to the article which we published on the 12th inst., announcing the discovery of gold at Mandeville, a reporter of the New Orleans Chronicle called upon Mr. Clausseu, Assayer of the United States Mint, who said he had heard nothing of the alleged find so far, but he believes that there is some gold in St. Tammany Parish.

He himself had discovered sand containing gold on the banks of the Tangipahoa River, between Arcola and Amite, and he believes there is gold all along this line, even to Osyka, Miss.

He did not think it would pay miners to go to work, as the quantity is not large enough, though the quality is fine.
End of articles
After that, gold fever was on everyone's mind as news came from other parts of the state.... 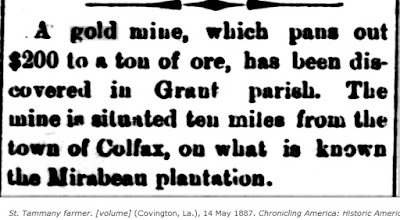 Over on Facebook, one Covington resident tells us that he has personally seen fine gold taken from the Tickfaw River west of Amite City. "It was about a half teaspoon in volume. It was found by digging around the lee side of roots at very low water and filling 5 gallon buckets with sand and clay. Then it was run through a spiral separator. Around 2 dozen 5 gallon buckets were run through his machine to obtain that amount of gold. Back breaking work for very little return," he said.
He has panned for gold in Mexico, New Mexico, Alaska, California and Belize, but never found enough worth the effort.