The challenges of living in early St. Tammany Parish included the constant onslaught of mosquitoes, flies, fleas and head lice, but there were ways of dealing with the aggravating insects. Lacombe area writer Polly Morris offered her research and ideas in a June 2, 1976, article published in the St. Tammany News Banner newspaper.

Click on the image below to make it larger and more readable.

Below is the text from the article shown above:

A devout Jesuit priest, Father Du Poisson, bitterly blamed mosquitoes for the ungodly increase in profanity during the days of early Louisiana.

"Since the French have been on the Mississippi", he wrote, "this little beast has caused more cursing than had been done in the rest of the world up to that time."

Although this insect was a worldwide nuisance, the all-American mosquito must have been more savage, by far, for the ship's carpenter, Andre Penicaut, who explored and lived in St. Tammany, told of mosquitoes "which bite until the blood comes."

Mosquitoes were not the only pest that plagued the early explorers, or even the citizens of the 20th Century, for the semitropical Southland literally crawled with varmints and vermin. One wonders how they endured before spray cans and packaged poisons.

If St. Tammany had its share of pests, it also had its share of plants that helped keep everything under control. And if old Grandma Jones did not have time nor money to spend on a trip to town for poisons, she had enough horse sense to make do with what she had in her pantry, in her garden, or in the woods beyond the clearing.  How effective her old fashioned methods were is debatable but none the less interesting.

Grandma had a number of things for mosquito abatement and control. She insisted on keeping several apartment houses for purple martins in good repair for the mosquito happy residents. She made a watery soup of  cloves or cinnamon to rub on face and hands as a repellent.

She made smudges from old rags and went from room to room with a coal scuttle of hot coals, on which she sprinkled brown sugar. Then she bedded the family under mosquito netting for the time when her efforts dissipated.

Grandma's greatest problem originated with Grandpa. Or rather with his hound dogs which harbored a multitude of fleas. The lattice work around the foundation of the house was not always effective in keeping them out from under it, and during the night they would dig a hole and crawl in under the house, keeping the family awake thumping on the floorboards as they scratched off fleas.

These fleas multiplied rapidly and looked for another host, which was usually Grandma or the children who were at the edge of the gallery. And they entered the house through cracks. Grandpa rightfully defended the dogs as helping keep away snakes and rats, but Grandma pounded back with a vengeance.

She made Grandpa douse the dogs with sage tea or rub them with chamomile flowers. Sometimes she made a concoction of pennyroyal to dip them in. And a forerunner of a modern flea collar which was a string saturated with some at the solution. 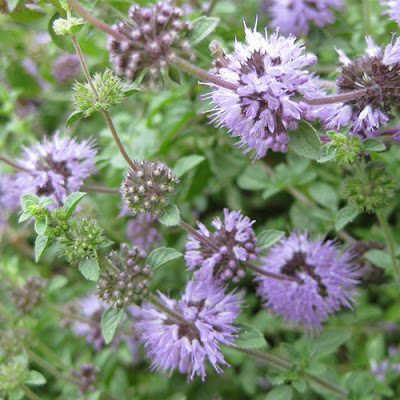 If she found a flea on a child, she put a strip of new flannel between the sheets, supposing that the flea preferred the warm fluff to tender human hide.

Flies caused the greatest flurry for both Grandma and her spouse. She sent her children out to the woods for pecan and walnut branches, which were supposed to discourage flies. She mixed black pepper with molasses in an attempt to orally burn them to death. She made open-faced fly sandwiches with pokeroot and honey. And finished off the rest with a swatter and flypaper.

Grandpa had his own battle with all sorts of flies that bothered the livestock. He rubbed the animals with smartweed, bay leaves, squash leaves, and fresh cut pumpkin. He poured potato water on them, or washed them down with infusion of pignut leaves. Or water in which black walnut leaves had soaked overnight. He also rubbed the harness with indigo leaves.

Bedbugs were the bane of Grandma's life, but luckily there was turpentine that came from pine trees. She put it on the mattress and in the cracks of the walls, and all over the bedstead. And just to make sure, she forced lye soap into every place where they could hide.

Another parasite that preyed on humans was head lice, an old problem that is now returning. The minute a child scratched its head, Grandma seated it on the highchair and made a diligent search for lice and nits. Woe to the child that had one of either, for getting rid of this vermin was torture, pure and simple.

The child's head was clipped closely, and coal oil was applied in generous amounts. Then the head was wrapped in a heavy towel and left to soak for a half-hour. Granny then scrubbed the head with lye soap, rinsed it in hot vinegar, and dried it. After which hot hog lard was applied and left overnight. The next day the remaining hair and scalp, if any, was again washed with lye soap and rinsed with scalding vinegar.

It was then that the real ordeal began. Granny combed the hair and scraped the scalp with a fine toothed comb, hopefully to get rid of every nit and louse.

Ants were the most aggravating insect of all. One tiny crumb or one grain of sugar brought an army of the pesky things like magic. Table legs were set in cans of water fortified with coal oil. Bed legs were given the same treatment. Grandma sprinkled black pepper in runways, and washed cabinets with alum water or geranium water. She sprinkled hominy grits around the house, to feed them outside. But still they dropped from the ceiling and even got into the closet and laundry bag, eating holes in soiled garments. They were her Waterloo.

Granny's garden of old fashioned flowers was not for beauty alone. She knew that onions and garlic amid roses would protect her flowers from aphids and other insects. She knew the value of pennyroyal, chamomile, geranium, sage, and marigolds, which were all useful in her primitive pest control.

From her vegetable garden came onions and cucumbers, the parings of which she scattered in the hen house for mites or in the yard for ticks.

Birds and rabbits were kept away by scarecrows, or by the baby of the family who was encouraged to bang on the dishpan with a wooden spoon. To keep deer from jumping the garden fence. she draped it with hides of bobcat, bear and panther, hoping their scent would scare away other animals.

When interplanting did not work, Grandma poured her dish water and wash water on all her plants. No doubt this was her most effective method, for nothing was more potent as a killer than Grandma's yellow lye soap.

Some of the most destructive pests were those that ruined food. But Granny knew that soapberries in wheat flour kept out weevils, and that sassafras bark kept dried fruit wholesome. And that black pepper was needed in dry beans.

Wax myrtle was supposed to keep away fleas, and provide sweet-smelling candles as a special bonus. Oddly enough Grandma did not object to spiders and lizards in the house, because they were her aides in controlling roaches, flies, and ants. Not to mention wasps and Yellow jackets. The Tabby cat, however, was not welcome, except at night when the mice came out. Rats were the particular concern of Grandpa, the hounds, and a family of cats that lived in the barn.

Grandma's warfare was probably not as effective as warfarin and DDT, but somehow she managed to live though it and raise 9 children without upsetting the balance of nature.

Perhaps, too, her methods were not so bad after all, for educated men in sterile white coats are studying commonplace plants for pesticides and insecticides. Plants like those that grow in St. Tammany... elder, sassafras, pokeweed and even the calamus and fern may be important someday.

For Grandma Jones tucked the leaves and fronds into bar closets and chests before the old fashioned moth ball was invented.