In 1980 a historical preservation survey of Abita Springs included a map of the several hotels that were located in the town in the early 1900's. Here is the map, with slight graphic improvements. Click on the image to make it larger. 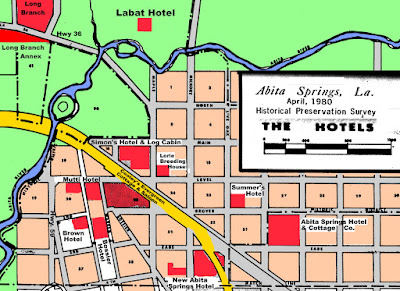 According to the survey publication, the Bossier hotel was built in 1867, and the Long Branch Hotel was completed in June of 1880. The Long Branch was built by Joseph Gazin and the main building consisted of 18 rooms with halls and galleries up and down "fitted with every convenience."

The first excursion train arrived at Abita Springs on Sunday, June 26, 1887, and that fostered an even greater need for hotel accommodations. 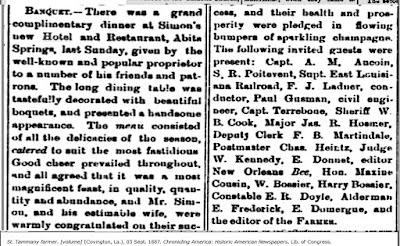 The report states that "in January 1891, the fine cottage of Gustave Martin and the unfinished two story hotel building of Matthew Brown were entirely consumed by fire." Later in the year, fire destroyed the newly built Bossier Hotel. 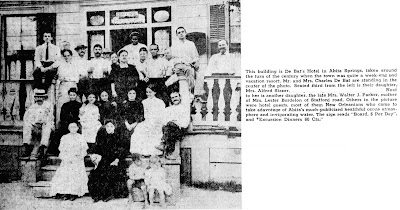 Click on the above image to make it larger. 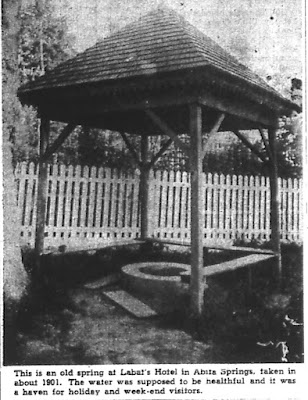 "In 1895, there is mention of the Gem Hotel owned by Rose Martin and A.A. Cooley's Evergreen Cottage," the preservation survey stated. "In April of 1898 the Abita Springs Hotel was opened with Widow O. Aubert being the proprietress."

The Abita Springs Hotel burned in 1900 and was rebuilt with steam heat to accommodate year-round visitors.

In 1903 the Mutti Hotel was named in the local newspapers, along with Duqusne Cottage, Ozone Cottage Company, Strain's Cottage, and Spring View Cottage. 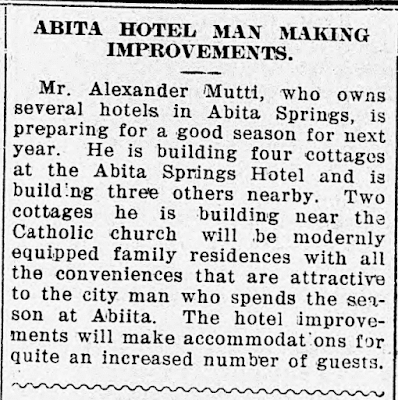 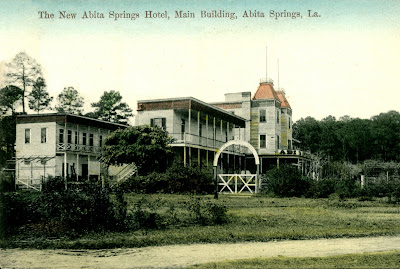 "These hotels were very well patronized at a time when Abita Springs was at its height of popularity. Accommodations for some two thousand guests were available in Abita at its zenith.

"In addition to the hotels, several houses and cottages were established to accommodate summer visitors. Lorio, Barclay, Morin, Martin's, and Strain Cottages to name a few all offered room and board to weekend and summer visitors. "

The survey went on to describe the extensive gardens that surrounded some of the Abita hotels, gardens of which much of the landscaping and plantings still existed in 1980, when the survey was written. 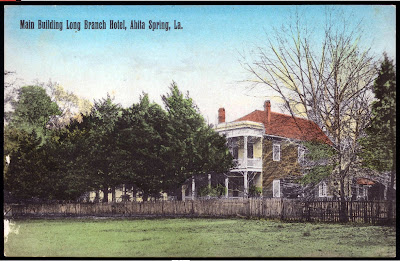 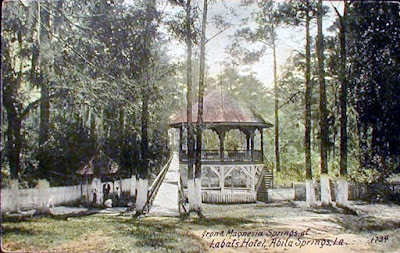 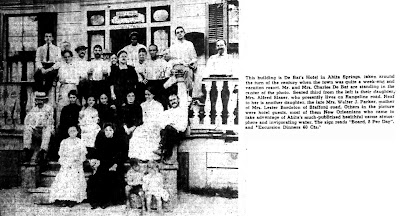