Without Emily Diamond, Covington would be a different place. Emily started Habitat for Humanity St. Tammany West in 1981, the tenth Habitat in the United States and the first affiliate in the state.

She brought people together to build homes working with Habitat homebuyers in the community, and the effort was a great success. Her early endeavor continues through the local Habitat chapter's ongoing work and was spotlighted seven years ago by the naming of a street located in the Groves at Mile Branch community in Covington "Emily Diamond Way." 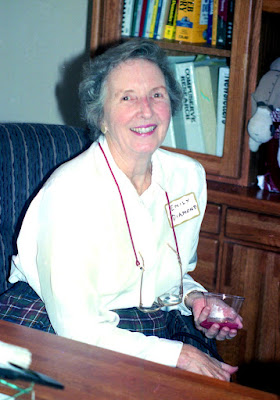 She was born Nov. 25, 1921, to Daniel Independence and Edna Josephine Glossbrenner, and was raised in Indianapolis, Ind. She attended Swarthmore College and Indiana University.

She came to Covington in 1959 and first worked as a receptionist and secretary at St. Paul's School from 1964 to 1967, taught third grade at Rosenwald Elementary in Covington in 1967 and taught kindergarten in Madisonville from 1970 to 1975.

In 1981, thirty-eight years ago, she launched the chapter that has since built more than 270 homes for those in need in the area. She had gone to Americus, Ga., to personally meet with Millard Fuller the founder of Habitat, to talk to him about starting the Covington chapter.

She lived in Covington for 50 years, during which time she endeared herself to many residents throughout the community for her volunteerism and activist involvements. 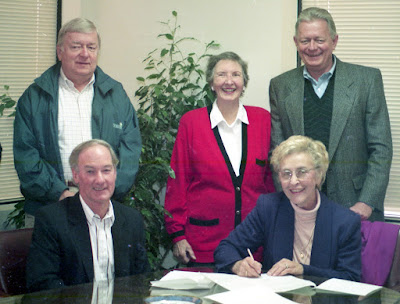 
While she was best known for her work with Habitat, Ms. Diamond also was a co-founder, secretary and treasurer for the Community Relations Council of Covington, which worked to better race relations during the 1960s and 1970s.

With the assistance of famed writer and Covington resident Walker Percy, the council formed its own credit union which served to assist low-income families in securing loans for housing. From 1969 when it opened until 1985, Diamond served as manager of the credit union.Emily served as president of the Covington Habitat Chapter for four years and was on the board for 17 years, and she also started and managed the Habitat Restore in Covington. The Covington Habitat Chapter created the Emily Diamond Habitat for Humanity Community in 1986.

Continuing her work as a community volunteer, Ms. Diamond until 2008, she worked at  Faith Bible Church in Covington from the late 1990s to the mid 2000's assisting in the ministry's drug rehabilitation program. In 1995 she received the Angels Among Us Volunteer Award  and the St Tammany Parish Chamber of Commerce Community Volunteer Award.

Her son David Diamond said that she believed that one person can make a difference in the world and that every human being on earth has amazing and absolute value.

Ms. Diamond died at 89 years of age in September of 2011 in Robbinsville, N.C. She had moved to Robbinsville to live with her daughter, Kathryn Lynch, in 2009 due to illness.

In 2012 a Covington street was renamed for her. The Covington City Council voted unanimously to name a street Emily Diamond Way for Diamond's longtime efforts in the community, recognizing her many years of service to the less fortunate in the area. 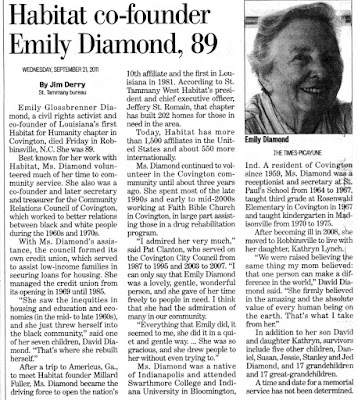