Jackson Cantrell, a 16 year old Mandeville resident who has become intrigued with the history of St. Tammany Parish, has written a fascinating history of the "Native People of Fontainebleau." The report was released this year, with 16 pages of information and maps about who lived where many years  ago.

The historical research was done as part of his Eagle Scout project, and included the placement of  two historical markers in the park, one designating the early significance of Native Americans in the area and the other the slaves that once worked on the plantation there. It was an emotional experience for Jackson, as he delved deeper into the records that detailed the activities of the area and the people who lived there.

HERE IS A LINK to his report on the Native People of Fontainbleau. The report includes this map of the various tribes that were represented in the area. 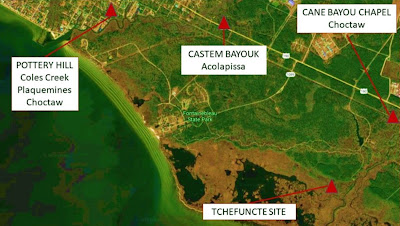 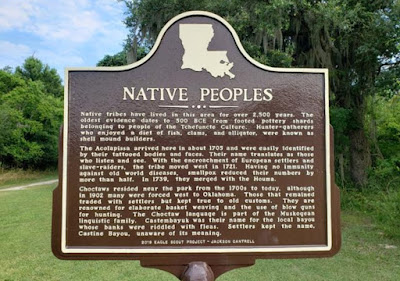 A few months ago, The Times Picayune wrote a detailed article about Cantrell and his efforts to research and publicly recognize the contributions of the slaves who lived on the plantation inside Fontainebleau State Park.  It was published on June 6, 2019, and may be read by CLICKING ON THIS LINK.

According to the article, Jackson met Grayhawk Perkins, a well-known local Native American historian, at a historical presentation and the two had much to share.

Jackson has also spoken at local meetings about his findings and his continued efforts to uncover, expand upon, and appreciate the history of St. Tammany.