Local Native American historian Grayhawk Perkins spoke at a public meeting held at the Fuhrmann Auditorium in Covington on June 7, 2017, an event hosted by the Covington Heritage Foundation. Perkins shared several stories about his efforts over the past 40 years to preserve the history of the area's original inhabitants through his teaching, his music, and story-telling. 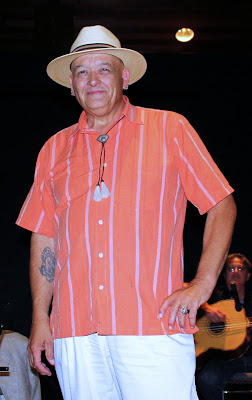 Perkins, a well-known cultural historian and musician, told of the importance of his grandmother's lessons about the past, as well those shared by his grandfather, aunts and uncles. "Because of my grandparents, I became the tribal story-teller," he said, "and I've even traveled to the Smithsonian to take part in their Native American history programs."

Perkins told about his early search for the history of the Native American cultures, especially those in the Muskogean Nation of which he is a part. "St. Tammany is known for its Choctaw population, but they were actually immigrants," he said. "They came into this area later. They were pushed out of MIssissippi in the beginning of the 1800's. But the Muskogeans were here first. The Choctaws spoke the Muskogean language however, so they were welcomed and blended in," he explained.

What is known as the "Tchefuncte culture" actually represents a time period in Native American history, Perkins said. It involved native peoples all the way from the Texas border into the Florida panhandle. "They had architecture, astronomy, agriculture. They were not nomads, and they lived in villages, large villages. Several of these cities featured mounds, some of which were 80 feet tall, and there were houses for families. Those communities stretched out for miles and miles." 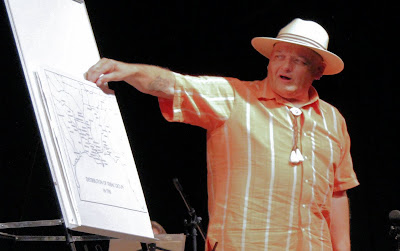 Tribal nations and councils so impressed Benjamin Franklin that parts of the United States government were patterned after the Native American nations and tribal governments, he explained. "Frankin was smart enough to see how it worked and incorporated parts of it into the new United States," Perkins said.

He asked his listeners who they think was here (in southeast Louisiana) when the first European set foot in America. "It was the Acolapissa  tribe" he said. "They were part of the Muskogean Nation, and they had seven large villages here, some of which were in Fontainebleau State Park." People are always finding arrowheads and points all over St. Tammany Parish, Perkins noted.

He touched upon how the French newcomers learned the Mobilian trade language used among the tribes in the region (as a second language) and as a result got along better with the native inhabitants than the English or the Dutch did.

In addition to his music and his teaching, Perkins has written books. He was able to write a dictionary with the help of his grandmother, sharing the meanings of the original Muskogean words. He also mentioned instances of natural healing remedies, such as when his grandmother placed wadded up spiderwebs into a deep cut to stop the bleeding.

Prior to his talk in Covington, Perkins had spent two days speaking to children at every library branch in Livingston Parish, explaining the values of life among the Native Americans, how they governed, their family life, and their day-to-day routines.

He performs regularly at the New Orleans Jazz Festival where he has served as a coordinator for the past 25 years, and lately he has collaborated on music projects with French musicians and others around the world.

Mark Johnson, president of the Covington Heritage Foundation, introduced Grayhawk to the audience of approximately 150. 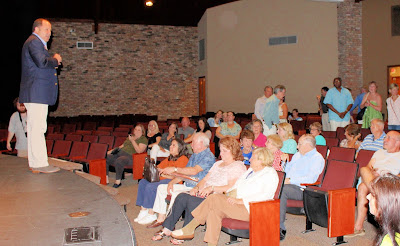 More Info About The Tchefuncte Culture.

According to information provided by the Louisiana Dept. of Culture, Recreation and Tourism, the Tchefuncte Culture began around 600 B.C. as a hunter-gatherer culture living in small, scattered sites in coastal areas or in lowlands near slow-moving streams. Long-distance trade was much less important, yet people in Louisiana were in contact with people in western Mississippi, coastal Alabama, eastern Texas, Arkansas, and southeastern Missouri.

The Tchefuncte Site located on the north shore of Lake Pontchartrain was so named because it was situated inside Tchefuncte State Park (renamed Fountainbleau State Park).
The site had two shell middens, one that measured 100 feet by 250 feet and another 100 feet by 150 feet. Both were excavated, and archaeologists found 50,000 pieces of pottery, as well as artifacts made from bone, shell, and stone. Forty-three human burials were recovered, none of which had objects buried with them.

Tchefuncte people appear to have camped on natural levees, terraces, salt domes, cheniers, and ridges that provided dry ground in the wet environment. They built their houses, which were probably temporary circular shelters having a frame of light poles covered with palmetto, thatch, or grass mixed with mud.

They were the first Louisiana Indians to make large amounts of pottery. They rolled coils of clay into shape and then smoothed them to form a container. Many shapes of pots were made, but characteristically they had "footed" bases.

After decorating the pots, they fired them by slow baking. The introduction of pottery was an important improvement in food storage. When these pots were kept covered, they provided a relatively dry and animal-proof, portable container. The Tchefuncte culture began to phase out around 200 B.C. 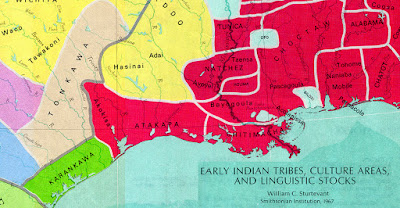 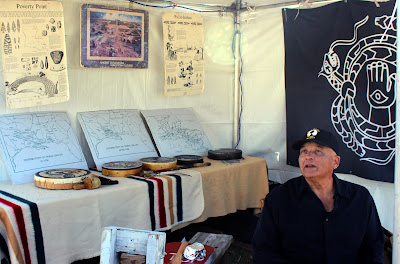 Grayhawk Perkins was a featured speaker at the 25th annual Three Rivers Art Festival in Covington.