The History of Pelican Park

The history of Pelican Park recreational facilities northeast of Mandeville is a case study of neighbors coming together for a common good, that of providing play facilities for area youth.

Pelican Park offers 32 athletic fields, gymnasiums with four indoor baskeball courts,  the multi purpose Castine Center (46,000 sq. ft.), and parking for over 1,700 vehicles. "On a typical Saturday, the Park has over 12,000 visitations," the Park's website stated, noting that over a year's time, the Park has over 1 million visitors. 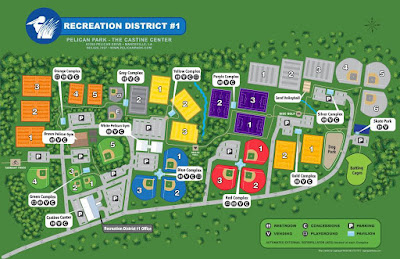 Pelican Park originated in the mid-1980's when a group of volunteers saw the need for a place in the Mandeville area for children to play. At that time, some recreational services were being met by a group called 4th Ward Recreation who donated hundreds of hours providing youth sports activities. "Finding fields and gyms for the programs was difficult, but thanks to people like the Moore Family, Our Lady of the Lake Church and the school principals, sites were found," according to the history. However, with more and more people moving to the Northshore, 4th Ward Recreation knew that they would soon need fields of their own.

Vacant land on state property was found in 1985, and volunteers led by Mrs. Sue McGuire, convinced state officials and Governor Edwards to lease 50 acres to 4th Ward Recreation Association for a Park. The volunteers held fundraisers and sought corporate donations to fund a construction project. The parish reactivated St. Tammany Parish Recreation District #1 in the Mandeville area, and appointed five members to the Board, including Mrs. McGuire who was elected Chairman.

The property was surveyed and a Master Plan was developed for the proposed park. Meetings were held to explain the vision, and a property tax millage was passed to finally support the operation. Phase One of Pelican Park was opened in early 1990, with a gym, one soccer field and five baseball/softball fields. Later that year, five more soccer fields, and two more ballfields were added.  Lights, parking lots, concession stands, bathrooms and paved roads were slowly added over the next three years.

In 1995 another 160 acres was leased to Pelican Park to accommodate growth, and a year later another property tax millage was approved to help expand and pay for the operation of the growing recreational facility. That helped pay for the  construction of the Castine Center, a 46,000 square foot events building (that also includes 4 basketball courts) which opened in February 1999. More ballfields were added in 1999.

"The growth in Mandeville continued and the influx of additional residents to the Mandeville area created very high demand on existing facilities and showed that Phase 3 of the Master Plan needed to be built," the history goes to to explain. Voters once again approved a construction millage in 2004 to fund the addition of more ballfields, a skateboard park, and other sports facilities.  Again in 2008, more multi-use practice fields were added, as well as more parking and a pavilion.

Also included are a "Health Trail" for hikers, classes in exercise, crafts, computers and self-improvement as well as instruction in welding, engine repair, stained glass, composting, beekeeping and cooking.

The "Bark Park" was opened in 2010 for dog owners to help their pets get exercise. Attractions today include batting cages, an 18 hole disc golf course, and a continuing schedule of hosting sports tournaments, and other community events.

In 2014, the district celebrated its 25th anniversary of Pelican Park.