Oil and gas exploration in St. Tammany Parish began in the early 1900's. According to a booklet on Oil and Gas Production in Louisiana published in 1910 by the United States Geological Survey, St. Tammany Parish had several wells being drilled at that time. None were being very successful in finding oil at that point. Here is an excerpt from the booklet. Click on the images to make them larger. 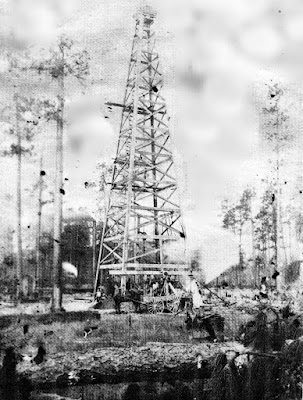 The oil well at Sulphur Springs near Covington in 1910 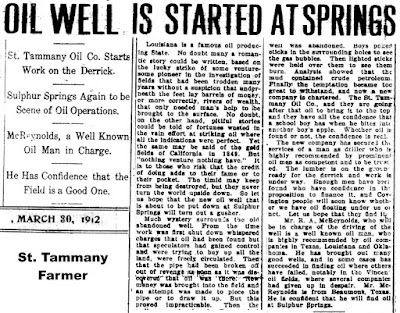 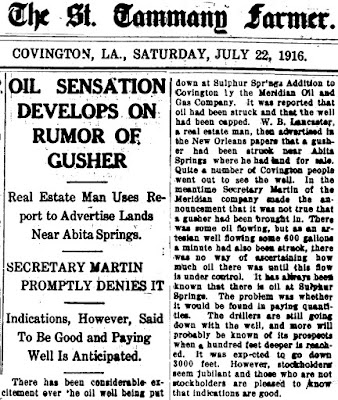 When the oil drillers ran out of money, local residents decided to hold a fundraiser to get together enough money to finish drilling the well. 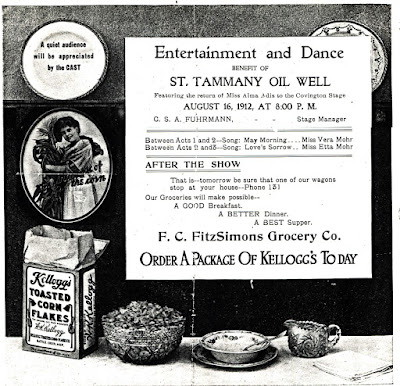 In the Natural Gas Journal of 1912, this information was shared about the possibility of gas being found in St. Tammany Parish. 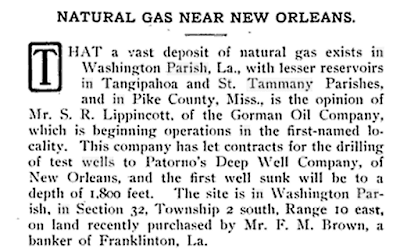 Then in 1918, these reports were published in the Oil Trade Journal: 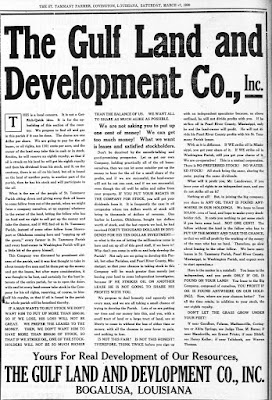 An interesting proposal by an oil well drilling company

THE ST. TAMMANY FARMER, MARCH 27, 1920
Text from the above advertisement:

THIS is a local concern. It is not a Get-Rich-Quick idea. It is for the up-building of this section of the country. We propose to find oil and gas in this parish if it can be done. The shares are one dollar per share. We are going to pay for the oil leases, or oil rights, ten (10) cents per acre, and the owner of the land may take this in cash or in stock.

Besides, he will reserve an eighth royalty, so that if oil is struck on his land he will get his eighth royalty and then his dividend from his stock, and if, on the contrary, there is no oil on his land, but oil is found on the land of another party, in another part of the parish, then he has his stock and will participate in the oil.

What is the use of the people of St. Tammany Parish sitting down and giving away their oil leases to some fellow from out of the parish, when we might form a company ourselves, at no expense whatever to the owner of the land, letting the fellow who has no land and no right to sell put up the money and take the chance, and if WE find oil in St. Tammany Parish, instead of some other fellow from Shreveport or Oklahoma coming here and "sopping up all the gravy," every farmer in St. Tammany Parish and every land-owner in Washington Parish kill get a little bit of the gravy himself.

This Company was discussed by prominent citizens of the parish, and it was first thought to take in about twenty-five men and let them put up the money and get the leases, but after more consideration, it was thought to be best, and certainly for the best interests of the entire parish, for us to open the doors wide and let every land-owner take stock in the Company for his oil rights, reserving, of course, to himself his royalty, so that if oil is found in the parish the whole parish will be benefited thereby.

We are not asking you to put up one cent of money! We can get too much money! What we want is leases and satisfied stockholders.

Don't be deceived by the smooth-talking and good-promising prospector. Let us get our own Company, holding practically all of the oil leases ourselves, then we can let some outsider put up the money to bore for the oil for a small share of the profits, and if we are successful, the land-owner will not be out one cent, and if we are successful, even though the oil well be miles and miles from your property, IF YOU PUT YOUR RIGHTS IN THE COMPANY FOR STOCK, you will get your dividends from it.

It is frequently the case in oil companies where ten dollars worth of stock will bring in thousands of dollars of revenue. One barber in Lawton, Oklahoma, bought ten dollars worth of stock, and the last reports we had, he had received FORTY THOUSAND DOLLARS IN DIVIDENDS FOR HIS TEN DOLLAR INVESTMENT—so what is the use of letting the millionaires come in here and eat up all of this good stuff, if we have it?

Why don't you come in with us and help develop the Parish? Not only are we going to develop this Parish, but other Parishes, and Pearl River County, Mississippi, so that your chances in taking stock in this Company will be much greater than merely just leasing your land to some independent investigator, because IF HE STRIKES OIL ON ANOTHER LEASE HE IS NOT GOING TO SHARE HIS PROFITS WITH YOU.

We propose to deal honestly and squarely with every man, and we are all taking a small chance of trying to develop the Parish. Lots of us are putting our time and our money into this, and you, with a small tract of land or a large tract of land, are at liberty to come in without the loss of either time or money, with all the chances in your favor to gain, and nothing to lose.

IS NOT THIS FAIR? IS NOT THIS HONEST? THEREFORE, THINK TWICE before you sign up with an independent speculator because, as above outlined, he will not divide profits with you. If he strikes oil in Pearl River County, Mississippi, only he and the land-owner will profit. He will not divide his Pearl River County profits with his St. Tammany Parish lessor.

What will it profit you, Mr. Landowner, if you lease your oil rights to an independent man, and you do not strike oil on it?

Nothing at all! But, in joining the big company, you share in ANY OIL THAT IS FOUND ANYWHERE IN OUR HOLDINGS. We hope to, lease 500,000 acres of land, and hope to make every stockholder rich. It costs you nothing to get some stock if you have some land. NOT ONE CENT! The fellow without the land is the fellow who has to PUT UP THE MONEY AND TAKE THE CHANCE, so that we will all profit by the working of the money of the man who has no land.

Therefore, go slow about leasing to the other fellow. We have many leases in St. Tammany Parish, Pearl River County, Mississippi, in Washington Parish, and expect soon to start operations.

DON'T LET THE GRASS GROW UNDER YOUR FEET!

Yours For Real Development of Our Resources,
THE GULF LAND AND DEVLOPMENT CO., INC.
BOGALUSA, LOUISIANA 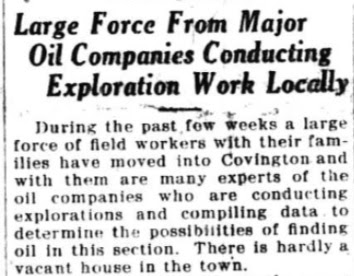 The Hysterical Oil Situation
An Editorial in the St. Tammany Farmer Newspaper 1927

Much has been said about the automobile. Moralists charge it with all manner of crimes and capital welcomes it as the greatest industry on earth. Highways are built by it, homes are mortgaged for it, life is sacrificed in the joy of its speed.

It is good or bad, according to how you look at it, but it has come to stay. Therefore there must be power to run it. At present, it is gasoline, and for a long time in the future it will be more gasoline-- synthetic, perhaps, but still gasoline -- made from oil. Also the automobile is a great consumer of oil.

From the viewpoint of demand, oil is a very desireable thing to have. It is the greatest hidden treasure of today. When you mention oil in St. Tammany Parish, eyes glisten and work stops. The farmer's plow is abandoned in mid furrow. The big land holder and the little land holder alike begin to figure on the value of one-eighth of a gusher.

They are all gushers. Life is too short to figure on anything less than a gusher. The seismograph and the torsion balance are the instruments, if everyone is to be satisfied in his expectations, through which salt domes and oil wells are to spring up on every farm and every piece of leased land in St. Tammany Parish.

It is not only in the broad open of the sunlit fields or the privacy of the office that these calculations are being made, but even within the sacred precincts of the parish jail there are worn pencils that have figured and figured -- and the hands that moved them have trembled at the thought that Rockefeller is not the only one, not by a jugful.

Dynamite blasts are trembling the earth and making the trail that is photographed on the mind of every real estate man as a picture of profits far in excess of boom commissions on development projects.

The shaking of window panes is sweeter music than that of the jazz band on a new subdivision, and while the boss of the shooting crew is giving out no information, there are wise ones that look at you pityingly if you imagination is not strong enough to lead you to a location.

All this disturbance in the trend of legitimate developments is to be regretted. There is not one chance in a thousand that oil will be found, and if it should be found it is very questionable if the distribution of wealth from this source will nearly equal the value, to the community, of the development of resources -- business, health and residential.

We would be invaded by the hosts of the underworld. Gambling and dissipation and immorality of the lawless elements that take advantage of the hysterical atmosphere that surrounds the newly discovered oil field would ruin us as a residential section.

We would sacrifice our future to the stampede of a short and riotous period of speculation. We sincerely hope that no oil will be found, and as we have just a good a chance as anyone at guessing, we don't believe there will be.

Over the years, a number of wells were successful in finding oil and gas.