Do you know that the drainage waterway that empties into Lake Pontchartrain just west of Mandeville Harbor is called "Little Bayou Castine"? That's to distinguish it from the other Bayou Castine that comes from U. S. Hwy. 190 and beyond (at least alongside Pelican Park) and empties into the lake at Mandeville harbor.

Click on the map below to enlarge the image.

Not only that, but as the 1935 topo map below shows, it looks like there used to be a bridge (?) at the east end of Madison St. that went over Bayou Castine and followed a road into Fontainebleau State Park camp area. 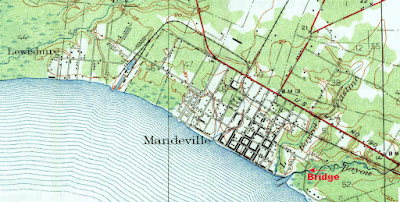 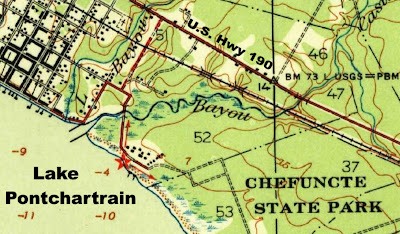 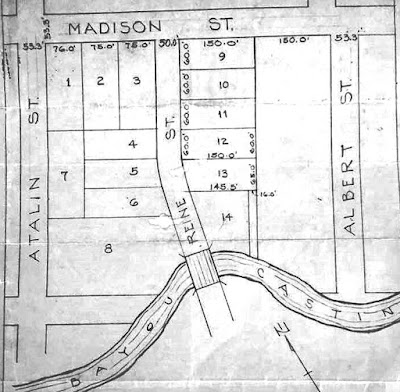 This 1952 map shows the bridge over Bayou Castine. It was on Reine Street off of Madison St. 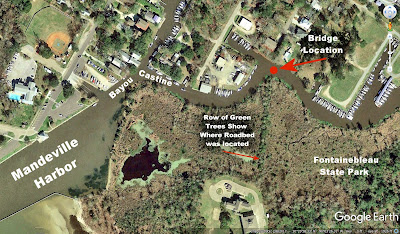 Click on the image above to make it larger. This photo from 2014 Google Earth aerial photography shows a row of green trees where the roadway used to be that led to the bridge over Bayou Castine.
When was this bridge first conceived? On January 14, 1834, when Bernard De Marigny was first selling off lots in the new subdivision called Quartier de Mandeville, one of the provisions in the transaction promised the following: "Mr. Marigny also obligates himself to have made a bridge across the little Bayou Castaing and one across the Shell Ravines, in the marked spots on the plan, these bridges once completed will be maintained by the owners of the lots of Mandeville."
Posted by Ron Barthet at 3:00 AM