The history of St. Jane de Chantal Parish Church in Abita Springs was written by Fr. Francis Sanders, O.S.B., in 1987, for the 100th Anniversary of the church's founding. 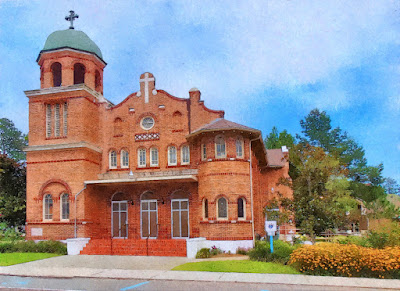 Portions of that history appear below:

The first white man to set foot on what is now St. Tammany Parish was Pierre LeMoyne, Sieur d’Iberville. Exploring a short cut by canoe from the Mississippi River to the Gulf, he crossed over (and named them) Lakes Maurepas and Pontchartrain. He landed at Goose Point, which is south-west of today’s Lacombe, on March 27, 1699. Finding the mosquitoes intolerable, and the land too marshy, he scored the area unfit for settlement, leaving it to the native Americans.

As early as 1725 the lake became a trade route between the Indians on the north shore and New Orleans, on the south. Some white people began to settle on the north shore. Early settlement by whites in the parish took place mostly along the rivers and bayous running into the lake.

St. Tammany Parish, as a political entity, was established by Governor Claiborne in 1811. (The Catholic Church has no ‘Saint Tammany’! The name ‘Tammany’ is generally thought to come from Tamanend, a Delaware Chief of the 17th century, who befriended the white man in the early days of colonization. Since many of the civil parishes in Louisiana are named after saints (Saint Bernard,  Saint John, Saint Charles, etc.). The prefix ‘saint’ was tagged onto Tammany also. Hence, “Saint” Tammany).

THE ‘MISSION OF SAINT TAMMANY’

Catholic churches were early established in Madisonville, Mandeville and Covington. All the rest of St. Tammany was designated as the “Mission of St. Tammany”. The Bishops and Archbishops of New Orleans (-it became an Archdiocese on July 19, 1850-) would appoint “Missionaries of St. Tammany” to tend to the spiritual needs of the settlers. A census of 1860 showed only 5406 white people in all of St. Tammany Parish. The most famous of these missionaries is Pere Adrien Rouquette, of course. Eventually he worked mostly with the Choctaw Indians, and became so close to them, they gave him the name ‘Chata-Ima’, which means ‘Like Choctaw’.

Other priests were as sacrificing as he, such as Fathers (Canon) Hyacinth Mignot, George Lamy, Joachim Manoritta, Lavaquery, G. M. Geraud and others.

Abita Springs was part of the ‘Mission of St. Tammany’. Lawrence Flot (a parishioner, who died in 1979, at the age of 81) recalled that around 1825 his grandfather built a chapel on his property (now the Dirmann property on Level St.), and Mass was offered there a few times a year when a missionary came around. He would also baptise, marry, hear confessions and bless graves. Lawrence recalled the names of only two of these missionaries: Canon Mignot and Pere Rouquette.

In the mid-1800’s Captain Joseph Bossier owned a large track of land in the Abita area. He and Colonel William Christy began promoting the area as a health and recreational resort because of its mineral springs, the ozone air, and beautiful terrain. But difficulty of access made the response slow. After crossing Lake Pontchartrain, one journeyed from Madisonville up the Tchefuncta to Covington by boat, and from there took a rough 3-mile overland trip in a 6-person buggy wagon to Abita.

Around 1900 trains provided a much easier means of transportation from New Orleans, and Abita entered its golden era as a famous health resort and recreational area. Often two trains at a time, each with 8 to 10 passenger cars, regularly brought hundreds of people to Abita.  At its peak Abita had about 450 permanent residents and 2,000 summer residents. Hotels and boarding houses were plentiful, and cottages everywhere. It was not unusual for the Mutti Hotel to prepare for 200 or 250 people each meal, Access to Abita from Mandeville was improved with the laying of rail tracks around 1910. A motor car similar to the New Orleans streetcar traveled on it for about five years, and then an electric car used the tracks for a few years. Fare from Mandeville to Abita – 15 cents; from Abita to Covington – 5 cents. The tracks went along what is now St. Mary Street, and the depot was near Morgan’s swimming pool.

But just as the trains brought many here, so the advent of better roads and cars lured people to other areas. And Abita’s boom was over. It dwindled to its present status of a quiet, small town – no longer famous, but still enjoying its healthful water, fresh air and beautiful surroundings.

In 1884 the Abita area became a mission of the church in Mandeville, then known as St. Theresa Church, and now as Our Lady of the Lake. Father Eugene Aveilhe was pastor then. He entered the first baptism in the mission’s registry on August 12, 1884.

The ST. TAMMANY FARMER issue of September 10, 1887, reported that Abita’s first church was erected and dedicated on September 7, 1887, and given the name ST. JANE DE CHANTAL MISSION. It was located on Keller St. at Second St., one block from the present library. (Because of this, the year 1887 was chosen as the centennial year of the St. Jane community. The centennial celebration was delayed to October 18, 1987, so as not to interfere with Pope John Paul II ‘s visit to New Orleans on September 12th). Father Aveilhe and Canon Mignot officiated at the dedication. The church bell was blessed by Father Aveilhe on Sunday September 16, 1887. He performed the first sixteen baptisms in the new mission, the last being in 1890. 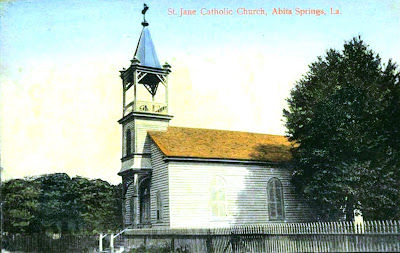 In 1889 St. Jane Mission was transferred to the care of St. Peter Church, Covington. The Pastor was Father Joseph Koegerl, a secular priest. This amazing priest, semi-retired, zealously cared for Abita, Madisonville, and Bedico while pastor of Covington. He did this all while traveling by horse and buggy. He obtained help from the priests of the new Benedictine St. Joseph Abbey, established near Ramsay (now St. Benedict) in 1902. They alternated with him saying Masses at his missions on weekends. On retiring in 1916, he recommended to the Archbishop that the Benedictines be assigned in his place.

In 1920, St. Jane Church became independent of St. Peter, Covington, and Father Martin Barre, O.S.B. became the first Administrator of the new quasi-parish (quasi = as if it were). Father Martin signed the baptismal registry as ‘pastor’, but more properly he should have signed as ‘administrator’. It was he who acquired all of the property now comprising our present church property, excepting the two lots on which the CCD building stands. 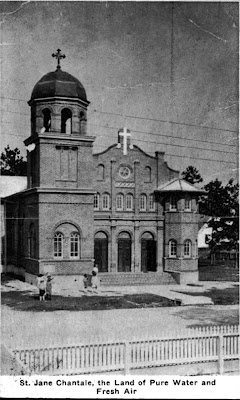 By 1912 he had acquired the three lots closet to the corner of Maple and Main Streets (on which the present church and rectory are). In 1923 he erected the new St. Jane’s Church, the first brick church in St. Tammany. Lawrence Flot constructed its ceiling. The cornerstone, dated 1924, was laid by Archbishop Shaw. Cost of the building was $35,000. Father Martin acquired two more lots on Maple St. adjourning the church, and had the old (first) church moved onto them to serve as a hall. He lived in the tiny room above the new church’s baptistry (now the confession room), and used one of the sacristies for an office. Shortly before leaving St. Jane, he acquired the two lots at Main and Hickory Streets, and the house that was there became the first rectory. (it was sold and moved away in 1971).

Father Martin’s pastorate extended from 1920 to 1930.He died in 1951. His successor was Father James Erickson, O.S.B. These were the depression years, felt much by the people. Often the Sunday collection was about $5- The Abbey furnished him with food and gas. In return, he taught a class at the seminary. T1 is to his credit that the debt incurred to build the church war. paid off during his administration. An avid tennis fan, he built a clay tennis court and soon just about every kid in town was lined up, awaiting their turn to play.

But Abita Springs' ‘open range’ then, and especially after a rain, cows would sink holes in the court as they walked over it. So, he decided to cement the court. He asked a contractor how much it would cost, saved that much, and told him to start the work. But halfway through, the contractor told him he under estimated, and the money ran out. So, Father James had to borrow the rest from the Abbey. He served from 1930 to 1942.

Father Augustine Bloyin, G.S.F. followed with a short pastorate, from 1942 to 1943. He left to join the Trappist Monks. 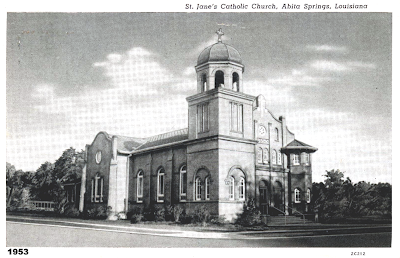 Father Thomas Schwickert, a Cistercian Monk from Germany, but residing at our Abbey, was the next pastor. In September, 1945, a wire in his car shorted, setting fire to the garage, which set the old (first) church afire, burning it to the ground. The day before, Abita had just finished putting in the water lines for fire hydrants – but they were not yet hooked into the water source! Father Thomas was pastor until 1949• He died the following year.

Father Athanasius Brugger, C.S.B. was the next administrator. During his ministry, the Archdiocese held its Seventh Synod in June, 1949, to determine the policy of the Archdiocese on doctrine, discipline and liturgy. The proceeds of that Synod were promulgated in October, 1949. In it, it declared that , as of that day (the promulgation), St. Jane de Chantel Church in Abita Springs was elevated to the status of a parish. 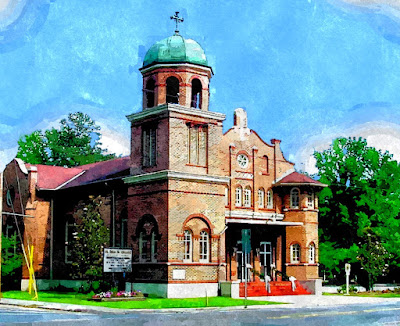