The story of the old roadside ship's anchor in Lacombe is told by Polly Morris in this 1974 article from the News Banner. Click on the image to see a larger view. 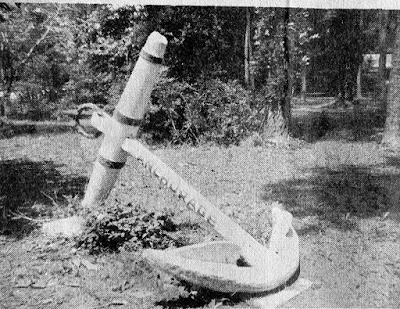 Here is the text from the article above:

Old Anchor Has Interesting Past
by Polly Morris

A familiar landmark in Lacombe is an old anchor that was once part of a collection in an unidentified New England museum. It is owned by Mr. and Mrs. William M. Chabreck, who know little of its history.

Thirty or more years ago, when the Chabreck home was known as The Anchorage, the collection at the museum was sold tb the American Shipping Company and arrangements were made through a friend to have the anchor shipped to Lacombe, where it was placed at the intersection of Highway 190 and a road that was later to become known as Anchorage Road. It is believed that the museum had been owned by the brother of Hetty Green, famous woman financeer, a miser,  and millionairess who was born at New Bedford, Massachusetts, in 1835.

She inherited an estate estimated at a cool ten million dollars from her father and her aunt who died in 1865; she and her two children lived like paupers until her death in 1916. Her estate then exceeded one hundred million dollars, and was divided between her son and daughter.

To a landlubber, the anchor is. only an interesting highway marker, but to an Old Salt it is a rather mysterious sea story. Such a seafarer is Captain Carl J. Nielsen, who went to sea at 15 years of age and well remembers voyages on the old windjammers. The Captain examined the anchor carefully and was able to reconstruct a part of its history.

The anchor dates back to the early 1880's, and is of the type used on a square rigged sailing vessel; its weight of one and one half tons indicates that it would have been used on a ship that was probably two hundred and twenty-five feet in length, more or less. Although it is impossible to know the name
of the ship, or the voyages it made, Neilsen was nevertheless able to tell of something that the anchor surely must have witnessed.

It would have known periods of violent storms at sea and long days in the doldrums; waiting for weeks for a breeze to fill the sails and send the ship on its way. The anchor would have seen men go mad  from the high humidity, heat, and sudden squalls while they were becalmed. It would also have known the grumblings of rugged men when salt meat would spoil; and the rations would become inedible; yet the food had to be eaten to ward off starvation.

During the voyage the anchor would have been dropped many times at strange ports, and the crew would be excited by the exotic lands where they could give vent to pent up emotions, or shop for silks and perfumes for the loved ones back home. Regardless of the joys of going ashore at enchanting places, there was no equal to the jubilation of going home.

The old anchor would be raised, dripping with salt water, to a scene of sheer merriment. Captain Neilsen described it well. A member of the crew would be laughing and swaying as he played a "North Sea Piano" otherwise known as an accordian. There would be 12 men, sweating and straining as they pushed at 6 bars that were inserted into the capstan. They would go around the. Windlass in a circle, winding the anchor upward as they sang the Anchor Chanty:

"Call all hands to the capstan,
See the cable run down clear;
Heave 'way for dear old Denmark.. .
For old Denmark we will sail.

Captain Neilsen's blue eyes squinted at an imaginary ,horizon as he sang. As the last words trailed away, he came back to land, and explained that he had used the word Denmark, because he was a Dane, but that the crew around the capstan would have sung of New Bedford, England, or wherever home port happened to be.

Perhaps it is fanciful to imagine that the old anchor was resentful of its last "voyage" in a truck, or being dropped to dry land for its last days; but it is somehow consoling to assume the anchor stirred slightly in its sleep when the old Anchor Chanty was heard once again. Maybe it even dreamed that it was "Rolling home". . . wherever that had been.