One of the best resources for historical researchers are the Sanborn Fire Insurance Maps of the early 1900's. The maps were made to help insurance companies assess fire risk associated with various buildings. Different colors were used to denote different types of construction, and some of the buildings were marked indicating their names and uses.

Here are the lakefront area Sanborn Maps for Mandeville in the year 1915. Things were really beginning to happen in downtown Mandeville, as evidenced by the many new buildings and many new businesses, compared to the maps from 1909.

Click on the images to make them appear larger. 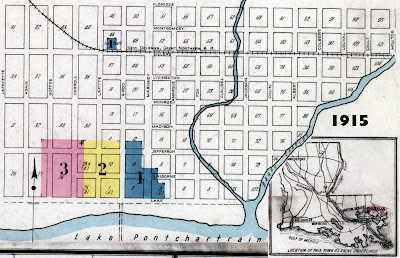 First, above is the overall map of the Mandeville lakefront area in 1915. The numbered color blocks indicate the three different maps in that year's edition. 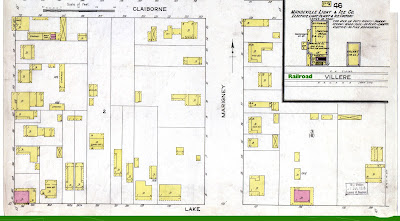 Above is shown the bottom of map one, with Lake Pontchartrain at the very bottom. Marigny Avenue bisects the map going northward. 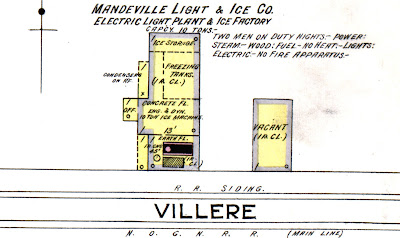 An inset map (above) shows the Mandeville Light and Ice Company plant which was located on the corner of Lafitte St. and  Villere St. a few more blocks from the lake (alongside the train tracks). The plant occupied the space now serving as the location of Aquarius Pools, Inc. near the Mandeville Trailhead park. Click on the images to make them appear larger. 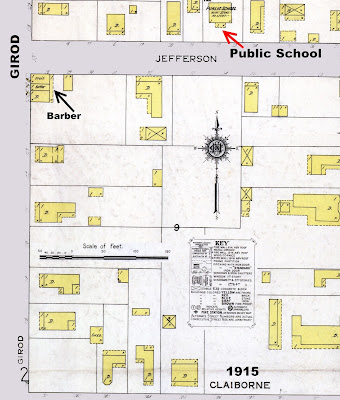 The map above is the top of Map 1, which shows the block bounded by Girod, Claiborne (one block from the lake), Jefferson St. to the north and Marigny Avenue. There is a public school located where the old town hall building is today, and a barber shop at the corner of Jefferson and Girod (imagine that!) Click on the image to make it appear larger. 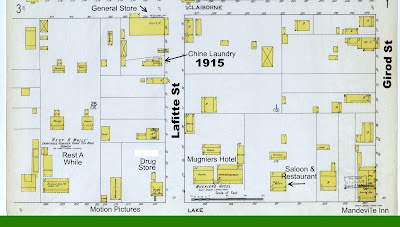 The map above is the bottom of Map 2, with the lake at the bottom, Girod to the right, and Lafitte St bisects the map as it goes northward. Click on the image to make it larger. There's lots to see here: the Mandeville Inn on the corner of Girod and Lake, the Saloon and Restaurant where Bechac's Restaurant was located, and Mugnier's Hotel. Also a drug store on the lake, and the Rest A While resort. 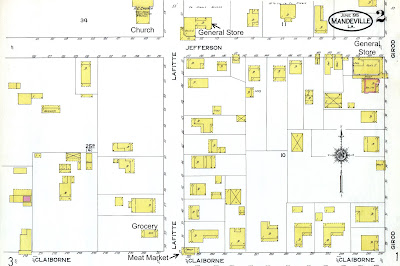 The top of Map 2 (see above) shows the area bounded by Girod St to the east, Claiborne St to the south, and Jefferson St. to the north, with Lafitte St again bisecting the map as it goes north. There's a church in the northwest quadrant of the Jefferson/Lafitte intersection (where Our Lady of the Lake Catholic Church is today), and a General Store across the street from it. Several general stores, meat markets and groceries are also in the area. 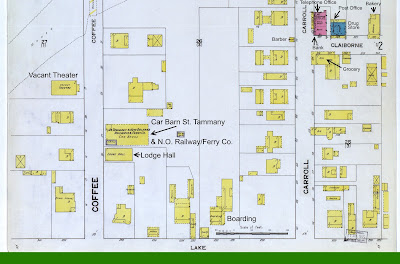 The bottom of Map 3 (above) shows the area just east of Carrol Street and over to the area just west of Coffee Street. Lake St. is at the bottom and Claiborne St comes in at the top right corner. Click on the image to make it appear larger.

On  Coffee St., half a block from the lake is the Car Barn for the St. Tammany and New Orleans Railway and Ferry Company. Then, over at the intersection of Claiborne and Carroll (top right), is a grocery store, bakery, drug store and post office, as well as the two story brick building that housed a bank, a telephone office, a grocery and meat market. Across the street from there was a barber shop. 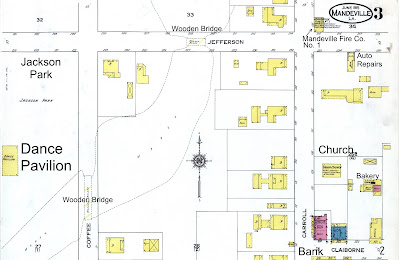 The top half of Map 3 (shown above) illustrates the area in the second block from the beach  around Coffee and Carroll Streets, with Jefferson St. running across the top. At the intersection of Claiborne and Carroll is the two story bank building again, and just north of it is the Union Church. To the rear of the Union Church is another bakery. At the top right is Mandeville Fire Co. No. 1 Fire Station. At the top left is Jackson Park with its dance pavilion. 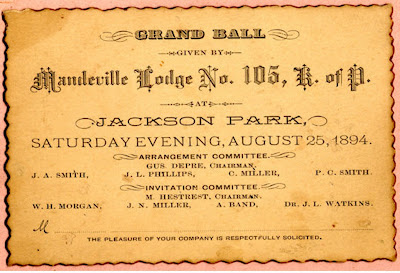 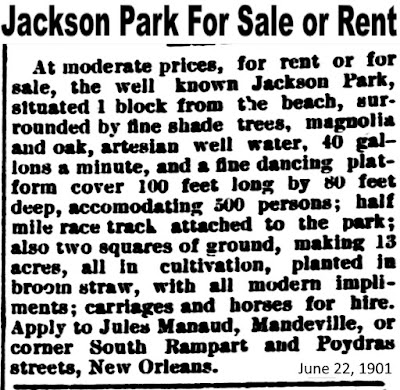 The information above tells about the fire department in 1915, its assets and capabilities.

To see the Sanborn Maps from 1904 for the same area, CLICK HERE.

To see the Sanborn Maps from 1909 for the same area, CLICK HERE.