A few years ago, in 2007, Folsom area resident Evelyn Pittman visited with fifth grade students at Folsom Elementary School to go over her photo scrapbook and tell them about the history of the school and the village. Here are two pictures of her talking to students some 12 years ago.

She retired from Folsom Elementary after teaching second grade there for 24 years. 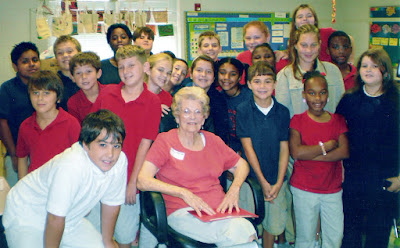 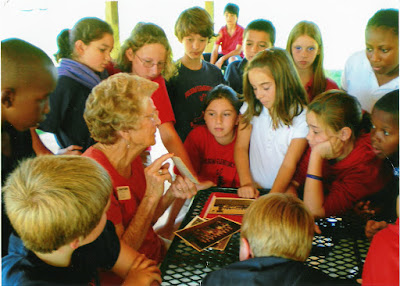 She was well-known throughout the community, especially for her singing in the church choir. She also sang at weddings for friends and family. Sandy Leblanc over on Facebook recalled that in the 1959/1960 school year she had two nieces, a nephew and several second cousins in her class. "So Mrs. Pittman was soon Aunt Evelyn to the whole class," she said.

To watch a video featuring an interview with Mrs. Pittman, CLICK HERE.

Mrs. Pittman passed away on July 21, 2015 at her home in Folsom.  Her obituary printed on the E. J. Fielding Funeral Home website, said that Evelyn loved children and was a born teacher.

She began teaching in 1942 immediately after graduating from Covington High School. There was a shortage of teachers during World War II and she was recruited right out of high school to begin teaching at the old Savannah Branch School on a teaching certificate, which was based on a test issued by the school board in lieu of a college diploma.

After her first year of teaching, the Savannah Branch School was closed and combined with the Folsom Consolidated School (later relocated and named Folsom Elementary). Thus began her 40 year teaching career. She attended Southeastern Louisiana University during her summer breaks where she obtained her bachelor’s degree and certification.

She was an active lifetime member of First Baptist Church Folsom where she taught children in Sunday School and sang in the church choir. She loved to cook.

She was survived by her son David Pittman, two daughters Jane Pittman and Ann Hatcher. She was preceded in death by her husband, J. C. Pittman, and her parents Fleet and Tera Wascom Blackwell. 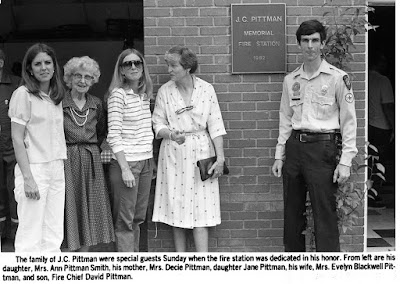 In 1982 she was present for the dedication of the J.C. Pittman Memorial Fire Station in Folsom, named in honor of her late husband. For more information about J.C. Pittman, CLICK HERE.

To see the collection of some of her historic photos on display at the Folsom Elementary in 2007, CLICK ON THIS LINK.