Thirty-seven years ago, in 1982, the J. C. Pittman Memorial Fire Station was dedicated in Folsom. A newspaper article covering the event and giving detailed biographical information about J. C. Pittman featured the following photo and text. Click on the images to make them larger and more readable. 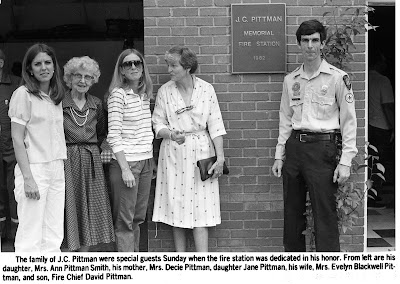 FOLSOM — The Village of Folsom paid homage to one of its favorite sons Sunday afternoon when the Folsom Volunteer Fire Department's fire station was dedicated to the memory of J.C. Pittman.

Pittman, who passed away last year, was one of Folsom's leading citizens. He was also one of the men who helped build the Folsom Volunteer Fire Department, and actually had a hand in building the first fire truck owned by the department.

About 100 villagers turned out Sunday afternoon to honor the late fire chief, to inspect the three fire engines that make up the present department's firefighting machinery, and to reminisce about the man keynote speaker Brady Fitzsimmons characterized as "a soldier, a scholar, a family man, and a statesman."

The brief ceremony was introduced by David Pittman, son of the late chief and present Folsom Fire Chief. Pittman, obviously moved by the events of the day, said, "We are here to talk about a man who was the chief, who was my Dad, and who I loved very much."

Rev. Bill Bryant of the Folsom Baptist Church gave the invocation and benediction for the ceremony, and Jamie Pittman led the crowd in the Pledge of Allegiance.

Fitzsimmons noted that although many government buildings have plaques on the walls naming them after someone, the Folsom fire station is different because it represents "the opportunity of the village to give something back to someone who gave it so much."

Most of the people of Folsom knew Pittman well, Fitzsimmons said, adding that, "if you came late to this community, you missed something special."

The designation "soldier, scholar, family man, and statesman" was appropriate for Pittman, and not just flattery, said Fitzsimmons.

As an American soldier in the Second World War, Pittman was captured by Germans in North Africa and spent some time in a prisoner of war camp.
Pittman was a searcher and adventurer, said Fitzsimmons, an honors graduate of Southeastern Louisiana University whose thirst for knowledge was never quenched. His fascination with and love for people is evident from the collection of photographs he left displayed in Pittman's Service Station.

Because of Pittman's deep involvement with the Folsom Volunteer Fire Department, said Fitzsimmons, the dedication of the station "is a living memory and not just a plaque." He noted that when the fire department bought its first truck, a 1947 Ford, in the 1960's, Pittman was one of the men who labored to adapt the machine for fighting fires.

"This building stands as a reminder that in giving we receive," said Fitzsimmons, "in pardoning we are pardoned, in death we are born."

"When we come by this," he concluded, "we should seek to be as generous as J.C. was generous."