A history of Mardi Gras celebrations in Covington was printed in the 1982 edition of the annual magazine published by the Greater Covington Area Chamber of Commerce. Click on the images below to make the photo larger. 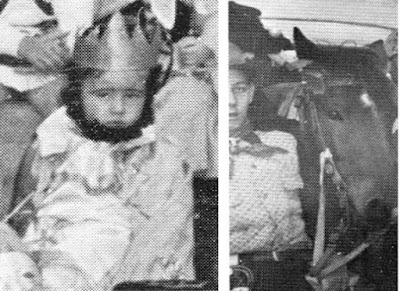 Here is the text from that 1982 article:

The History of Mardi Gras in Covington

"If you are old enough to remember Mardi Gras in Covington 40 years ago, then you will remember that there were a few little straggling costumed children with no place to go and nothing to do and not even very many people in town to admire their costumes.

"Covington was almost a ghost town on Mardi Gras Day. But that is not the case today. Covington clamors with people on Mardi Gras Day, and it is getting bigger every year. But before we talk more about Mardi Gras in 1982, let us go back a number of years.

"It's March, 1884 and it is the day of Covington's first Carnival parade. A young men's organization called "The Knights of Carnival" put on this splendid affair. The King was Jules Pechon, and his Queen was Carrie Morti. There were decorated carriages and plumed horses, and the King and Queen were gracious to their subjects that turned out to see them. 1884 was the first Covington Carnival recorded. There were other Carnivals that
apparently followed this one.

"In 1893, the Parade and Royal Family were described in great detail in the edition of the St. Tammany Farmer. The King was Ernest Pechon, and he was dressed in crimson and gold. His Queen was Mae Moret. On Carnival morning a cannon blast greeted the sunrise, and later maskers and merrymakers assembled in the streets. The King was escorted by an honor guard wearing silver helmets followed by eight lavishly decorated floats. That evening after the parade, the King and Queen ruled at the Grand Ball.

"After this year, records were not available until 1911, when another organization put on a Carnival Parade with nine decorated floats - all depicted Indian scenes - Choctaw, Bogue Falaya, Pearl River, Abita Springs - all represented their Indian background. Each float was drawn by several horses, decorated and plumed. King St. Tammany was Anatole Beaucoudray, and his Queen was Mae Poole. There were costumed maskers in the streets. After the day's activities, there was a Ball.

"In 1948, one of Covington's citizens, Rosemerry Fuhrmann, started a small Carnival Parade for the children of Covington. It was composed mostly of small children, in costumes and masks, with their decorated bicycles and little red wagons. It was a walking parade only two blocks long, from the Courthouse to the Post Office. 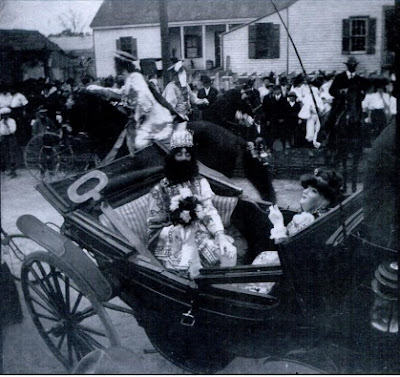 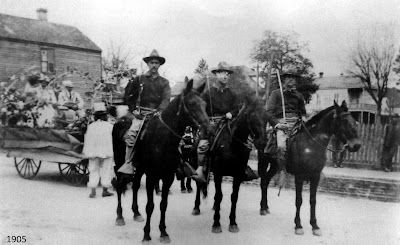 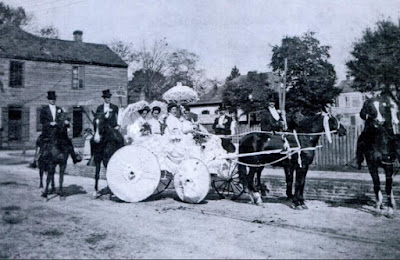 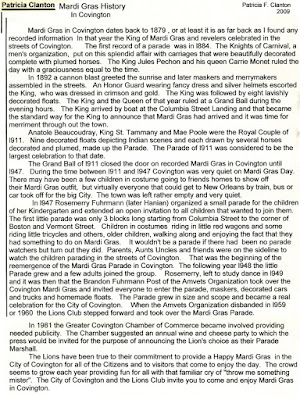 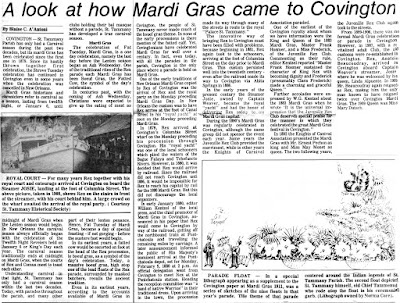