Back in the days when everyone had "ice boxes" instead of refrigerators, it meant you had to have a steady supply of ice delivered to your door. Since ice doesn't keep well in the summer, it meant there had to be an ice house in every town, and to make ice, it helped to have electricity. So in the early days of electricity, the ice houses generally became the electric generating stations that eventually supplied the entire town not only with cool ice but also with hot electric current.

At least that was the case in Covington, and here are two photographs from the early 20th century to illustrate the point. Click on the images to make them larger. 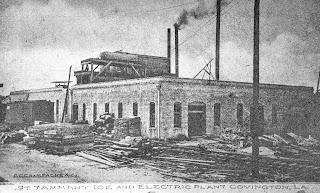 Here is the Covington Ice House and Electric plant building. The company had the first generator in Covington, and was awarded the contract to provide the town of Covington with electricity in 1910. 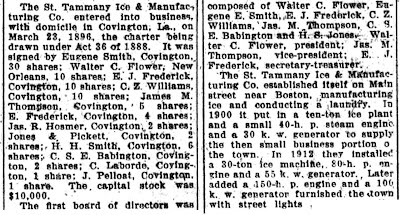 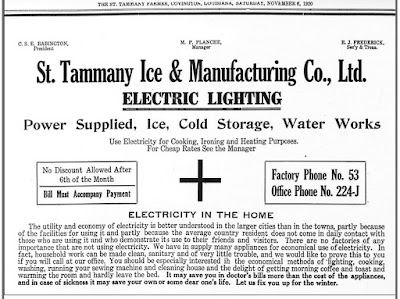 According to a close community source, St. Tammany Ice & Manufacturing Co., Ltd, was a powerful aggressive service business serving the Covington area. This business manufactured and  delivered ice to the businesses and residences in and about Covington and it also shipped ice in box cars to other communities in this area.

The company also installed a waterworks system in the streets of Covington serving the businesses and residences with good water from deep wells.
Next came the  need for electricity in this area so the company  came forward and installed the equipment to generate electrical current and built  the lines and other service outlets to deliver electrical current to the businesses and residences in the Covington area.

This service expanded to  cover Abita and Mandeville as well. According to Lawrence Frederick when the motor car trolley was liquidated in 1918 the St Tammany Ice and Manufacturing Company purchased the right of way and electric lines. He wrote “This line was maintained to supply electric current to Mandeville and Abita from the Covington plant.”
But in addition to these services the company was instrumental in  establishing many other businesses in St. Tammany  Parish. The company was headed and managed and  mostly owned by Edward A. Frederick and Maurice P. Planche, both of Covington. These two men were active in the economic, social and political  growth of Covington and the area of west St. Tammany Parish.

Here is an article about the company published in 1919. 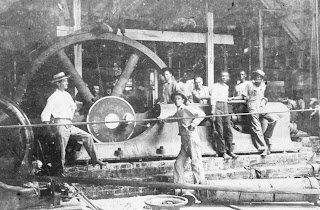 Inside the building were a crew of men tending to the big electric generator, which had a big flywheel to keep it running smoothly. 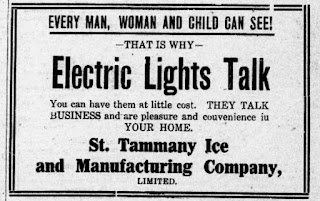 Above is an advertisement from a 1911 St. Tammany Farmer Newspaper

It housed the ice manufacturing machinery and tanks, and cold storage facility. The plant added the Production of Electric D.C. Current with steam driven generators. Current generated from these projects was tramsmitted over the lines to homes and to businesses in and about Covington. 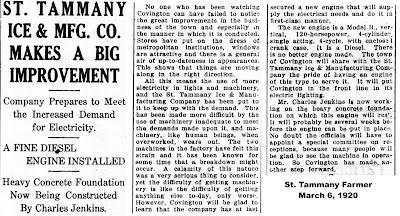 This facility was later expanded to include Abita Springs and Mandeville, as the industry progressed this plant was compelled to convert to alternating current and purchased diesel engines and alternating generators and installed them. This change also demanded the
use of different transmission lines and the installation of transformers along the lines.

Their personnell had to be trained in the use of this new machinery and material. The company had to secure a franchise with the several towns which it supplied electric current to. This company also served the Covington area with water supply and had to install and maintain the pipe lines and the pumps needed to pump the water and to maintain sufficient pressure for normal use and for fire protection.

This was a stock company but was primarilly owned and operated by E. J. Frederick and M.P. Planche. They furnished the inspiration and often the financial backing and promotional activity for many other businesses in the Covington area. 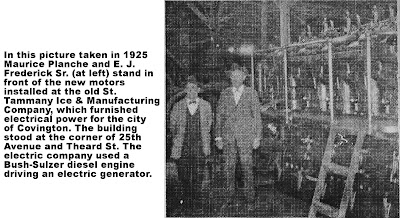 St. Tammany Ice & Manufacturing Company also had the largest flowing water well in the State of Louisiana.   The building was located at 500 N. Theard Street, where "The Market" now stands across the street from the southern end of the new parish courthouse. 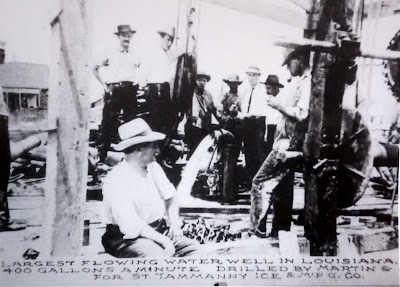 This new well was the largest flowing water well in the state of Louisiana. It was drilled in excess of 2000 feet and flowed 400 gallons per minute. The water was used for the plant and to supply the town of Covington with water for its water system. The St. Tammany Ice and Manufacturing Co. installed the water mains, the property connections, water meters and  operated the entire waterworks system.

Also fire hydrants were placed along the mains. The pumping plant had special fire pumps to increase the water pressure into the mains at time of a  fire. On two corners in the center  of town  large reservoirs were dug underground and stored thousands of gallons of water to support the fire pumps in these area. 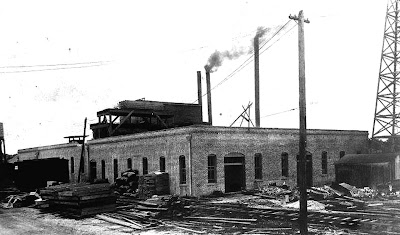 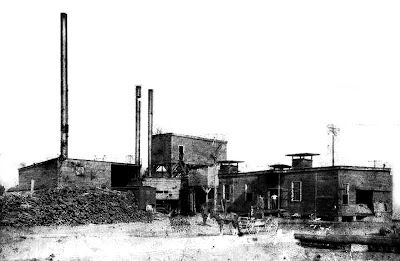 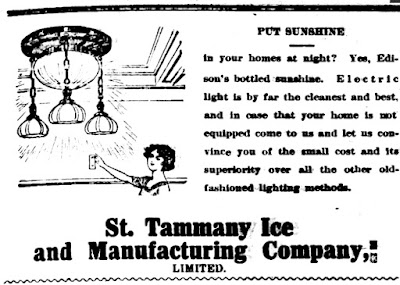 It was located on Theard between 25th Ave. and 26th Ave.

Dr. John R. Vercellotti of Covington recalls that "Jules Vergez had a better feel for the technologically advanced components (of installing electric wiring). The Vergez family lived right across the street from the St. Tammany Ice and Manufacturing Co., which became the first electricity-producer in the area. The company needed the electricty to make ice, and nobody else in the area was making electricity, so Jules talked them into letting him run a wire from the plant over to their house where it powered a single light bulb hanging down from the ceiling of his mother's kitchen."  As a result, Mrs. Vergez had the first residential electric light in Covington. "That was really something, and they always laughed about that," Vercellotti said.
In 1921 the city renewed its contract with St. Tammany Ice and Manufacturing to continue to provide electric service and streetlights for the town. 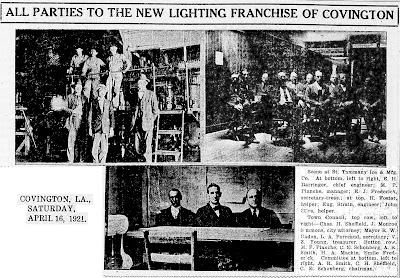