Blacksmithing Was A Key Community Service

One of the first articles I wrote for Covington readers was about the semi-retired blacksmith who had a shop on Jefferson Avenue (near where the fire station is today.) He displayed a wide range of community service and commitment throughout his career. Not only that, but Henri Vergez told me a lot about the history of Covington and western St. Tammany Parish.  Click on the images below to enlarge the view. 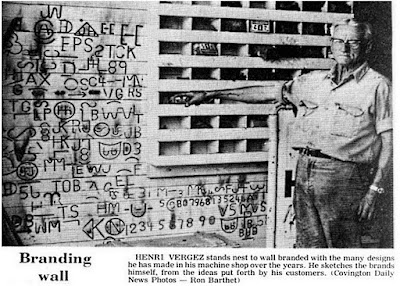 Blacksmithin' lives on in a different sort of way

While blacksmiths may no longer be needed on the Covington transportation scene, Henri Vergez still plays an important part in the functioning of the city, serving the community with a machine shop that's been a part of town for many years.

Vergez's father Auguste came to Covington first in 1900 and opened his original blacksmith shop around 1905. The first shop was located just behind the present machine shop on Jefferson Street and was taken down after the present building, now 16 years old, was built. Vergez isn't called upon much to do the type of work his father did when the shop first opened, but he has branched out and changed a bit to keep up with the times.

Part of Vergez's work is designing and building branding irons. He has constructed many of the irons for ranches in the area and after each one is finished he trios it out on a plank wall in his shop, so many of the area brands are burned into the woodwork there. The old blacksmith shop had a wall with literally hundreds of brands burned into it and when the shop was disassembled, Vergez saved the planks containing the brand designs and stored them in his new shop for a time.

After they had rotted for several months, he finally decided to throw them away and use the space for something else. Only later did he discover that someone in New Orleans may have bought the branded walk for a couple thousand dollars.

To help the youth of the community, Vergez has been running an informal "training program" for special boys he feels would do good in the trade. He has no idea how many he has trained in the art of machine shop skills, but every once in a while someone will come up to him and say "Remember when I used to work for you?"

"Then they would tell me who they were and when they worked with me," he said. "Sometimes it lust surprises me to find out what some of them are doing." He accepts boys who are willing to work and need the opportunity to learn the trade, not bothered by their past.

He says he used to belong to almost every organization around, the volunteer fire departments included. He was even a charter member of the local Lions Club. But he says after a while a group will get too many members in it and they begin to have to prove things that have already been proven for many years. In other words, the clubs begin to repeat themselves, to start over again to accommodate the new members. "All organizations are the same," he commented.

He remembers how he used to ride the fire trucks with his father when he was a youth (his father was a volunteer with fire station Jefferson No. 1). They rode in carnivals and local parades.

The visitors came across the lake in passenger schooners and ferry boats. The three most popular boats were the Susquehannah, the Madisonville and the Camillia. He said they  were able to carry cars across the lake.

Even in 1910 the idea of a causeway across the lake was a recurrent issue, but the lack of equipment and technique prevented the project.

Vergez is now in semi-retirement, operating his shop because he enjoys the work. He retired full time a couple years ago but after three days of twiddling his thumbs, he had to go back to work. "If you sit around twiddling your thumbs, you'll go nuts," he explained.

He likes to fish in his spare time and owns a couple bird dogs to use when he hunts. On Wednesdays he closes his shop down and and takes off to fish in his favorite spot or visit around town.

He has a daughter and a son with him, his son now attending summer school majoring in architecture. It's unlikely his son will take over the shop, Vergez said, but his background in his father's machine shop will aid him in his career. Vergez's top advice to his son Leon Jr. is "don't go to work for someone else; I don't believe in that."

He thinks of his 'work as a real challenge, not like doing the same thing day after day after day. The creativity it requires keeps him going. One time he worked for someone else, being a tinsmith. "First job I had was to tar a roof. That was in August. It was the hottest job I've ever had in my life. I came back as red as a crawfish."

He doesn't think he could have done as well in New Orleans as he has in Covington. He likes the way of life here and appreciates the hunting and fishing nearby.

"I'm pretty damn independent," he chuckled, "and you can't be too independent. If somebody comes in with a real problem, though, I try to help them out. I can't tell them no if they really desperately need a job done." he admitted.

"You see, everything this side of Jefferson Ave. is what was called Old Covington and the streets are cut up into diamonds and God knows what kind of shapes, but on the other side the streets are laid out square," he explained."If we went out as far as where the hospital is now," he added, "well, we were way out in the woods then."

He even recalled when the graveyard next door to the Community Center was nothing but a rice field; and at that time the present Fair Grounds weren't even built so the fairs and such were held at the Pavilion in Bogue Falaya State Park. The huge building there used to be on stilts to protect it from floods but since then it has been lowered to ground level. He said that the building in the state park is a very old one.

When asked what the major change had been in Covington over the past 30 years, Vergez said it was the improved communications and roadways. The town was pretty isolated in those times, he said, and a person had to stay in town much of the time.

He recalled that every summer worlds of people would come to the area from New Orleans, making reservations for summer homes from one year to the next. Families from the Crescent City would rent houses throughout Covington, Abita Springs and Mandeville to spend the summers in the Ozone climate. "It was crowded; I mean, really packed," he stated.

An advertisement from 1909 (below) 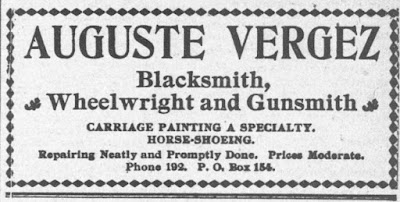 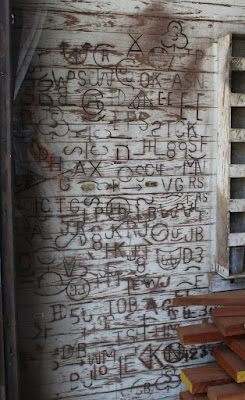 The branding iron test wall is now part of the Bigler Woodworks Shop.