The Shoreline railroad ran between Slidell and Covington and served a number of businesses for many years. But as time wore on fewer businesses were using the train for shipments, so the railroad was considered for abandonment. For the remaining businesses along the line, abandonment could mean increased shipping costs and loss of jobs. In 1979, this article appeared in the St. Tammany News Banner. 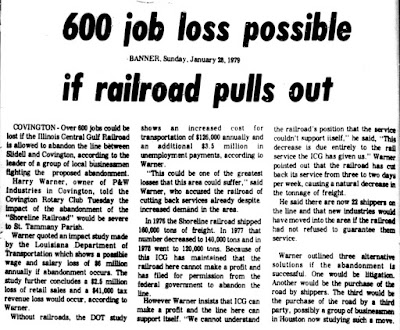 The track was indeed abandoned, however, and thus began the plans to make sure the railroad right-of-way was used for the public benefit.

The efforts to transition the old railroad track from Slidell to Covington for public use was a slow, exacting and painstaking process. The federal Rails To Trails program was making it possible, but parish officials, Kevin Davis in particular, had to get a lot of ducks in a row to make it happen. 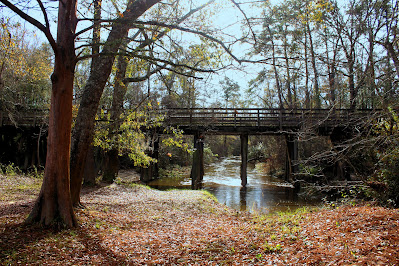 While the negotiations were going on, I drew a poster depicting some of the activities that would be popular on the old train track, activities such as jogging, walking, cycling, horseback riding, etc. Davis liked the picture, since it captured what the whole project was about. When the name Tammany Trace was chosen, it was decided to make the poster into souvenirs for the official name announcement ceremony. It was given away to several people as a commemorative item from the event. 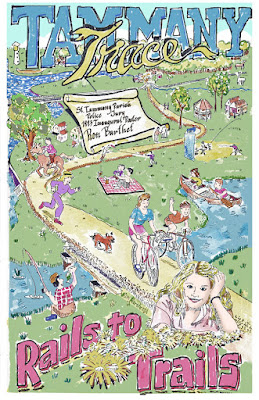 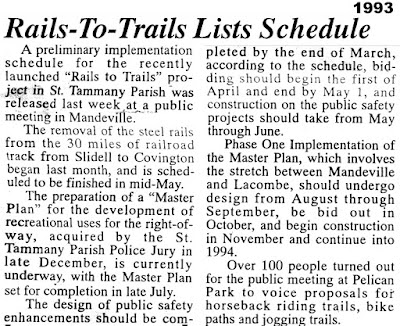 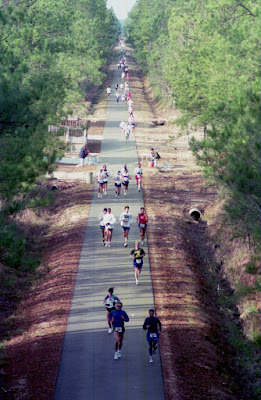 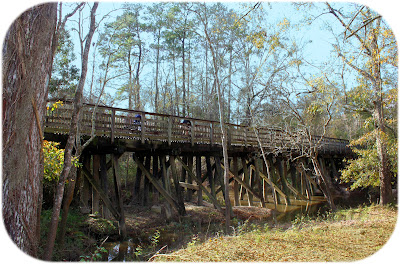 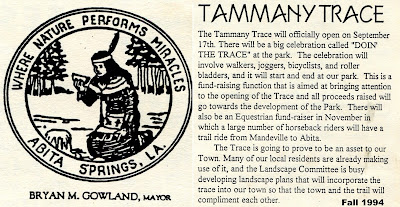 A video on the Tammany Trace

"The Tammany Trace trail is located along the northern banks of Lake Pontchartrain, running west of Slidell, passing through Mandeville where it turns north to Abita Springs and then heads west again to end in Covington. The old rail grade follows nearly 28 miles of right-of-way once used by the Gulf, Mobile & Ohio as a branch that split from its main line into New Orleans. The route has a deep history rooted in the timber industry, and for many years, traffic on the line remained relatively strong. New owner Illinois Central Gulf first attempted to abandon it, citing declining freight during the 1980s. Eventually, and despite some backlash, the branch was finally abandoned during the early 1990s and turned into today’s rail trail.

The history of the Gulf, Mobile & Ohio’s (GM&O) most southern branch begins in 1885 when the East Louisiana Railroad began construction from the main line of the New Orleans & Northeastern (later part of the Southern Railway) at Pearl River, connecting with Abita Springs by 1887, nearly 20 miles away. A year later it had reached nearby Covington.

The railroad’s development was spurred by the growth of the town, thanks largely to the region’s rich tracts of timber, while its initial construction was funded through the Poitevent & Favre Lumber Company. A few years after service had begun, a spur was constructed from St. Tammany to Mandeville, opening in 1892. Further growth continued into the early 20th century, including a new 13-mile line from Covington to Folsom completed in 1905, and the rise of passenger traffic when the town became a popular resort destination. It once boasted one of the South’s finest accommodations—the Southern Hotel.

Interestingly, the grade now used by the Tammany Trace does not follow the original alignment to Covington. In 1905, the Great Southern Lumber Company purchased the East Louisiana and folded it into the newly formed New Orleans Great Northern Railroad (NOGN) to build a major route serving New Orleans and Jackson, Mississippi. Under new ownership, an upgraded line was constructed to Covington and originating at Slidell along the NOGN. It ran via Mandeville, Lacombe, and Abita Springs.

It was also known as the “Shore Line” and spanned a little over 40 miles. Following its completion, the original grade was abandoned. Through the 1920s, the line and resort prospered thanks to timber and the so-called health-giving ozone that the region supposedly provided to those suffering from various types of illness. In 1929, the NOGN was acquired by the Gulf, Mobile & Northern; during the Great Depression, the Covington Branch saw its fortunes decline when timber was clear-felled and advances in the medical field rendered the region’s health benefits obsolete.

In 1934, Covington lost its western through-connection via the Yazoo & Mississippi Valley Railway, an Illinois Central subsidiary, which abandoned its line east of Hammond following declining timber traffic; it remained in use by local lumber companies until around 1970. In 1939, Covington lost all passenger service when the GM&N discontinued its remaining gas-electric “Doodlebug” motorized railcars. These gasoline-powered contraptions became popular at the time as a means of providing local passenger service while being less costly to operate than traditional trains. In 1940, the GM&N merged with the Mobile & Ohio to form the classic Gulf, Mobile & Ohio.

Together, the two systems offered through-service from Chicago to New Orleans, cutting through the heart of the Midwest and South. The GM&O was unique in this manner, with only the Illinois Central providing a similar north-south trunk line (traditionally routes ran east to west). In 1947, the GM&O further expanded when it acquired the Chicago & Alton from the Baltimore & Ohio, allowing it to reach as far west as Kansas City. Other important connections included Memphis, Montgomery, Mobile, and Birmingham.

Following World War II, freight over the Covington line was strong enough that it remained an important branch on the GM&O, although competition from trucks slowly ate away this traffic, especially following the opening of the Lake Pontchartrain Causeway from New Orleans to Mandeville. On August 10, 1972, the GM&O and IC merged to form Illinois Central Gulf (ICG). The idea behind the merger was to pool resources into a more efficient railroad; however, similar to the earlier Penn Central debacle, both systems closely paralleled each other, and the success of the ICG has often been questioned.

In an effort to realize the benefits of the merger, ICG began abandoning hundreds of miles of duplicate and “excess” trackage during the 1980s under new management intent on returning the company to profitability. During this time the railroad was also eying the line to Covington for abandonment. In 1986, the company announced plans to discontinue service over the corridor despite a project that in 1981 had used federal funds to significantly upgrade the route.

In 1988, the reborn Illinois Central (which had merely dropped the “Gulf” from its title) stopped providing service and was granted permission from the Interstate Commerce Commission to abandon the line in 1992. There were some efforts to keep it open but these failed to materialize, and the Tammany Trace Trail was born in 1993." 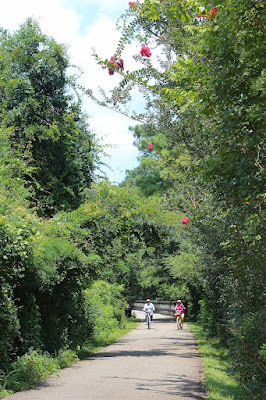